​MOKANE, Mo. --- There was quite a thud coming out of Mokane in late October of last year.

No, it wasn't the nuclear plant.

It was the season-ending thud for South Callaway, as the No. 3 seed and favored Bulldogs were getting bulldozed in the first round of districts by Cole Camp, 47-27. The thud resounded all the way around the calendar.

"The way the season ended last year," Bulldogs second-year coach Zack Hess said, "it was very motivating for our younger players, because they did not want to experience that again. So they've kept that in the back of their mind and worked really hard in the offseason.

"In the long run, it might have been a good thing. We had some extra workouts we put in there in the mornings, and we had a lot of guys who were motivated to come to those."

So far, so good --- the extra spark has fueled the Bulldogs to a 3-0 start heading into Friday night's Callaway Cup clash with North Callaway at 7 p.m. in Mokane.

While the last two weeks have been easy against Milan and Wright City --- two teams who are a combined 0-6, two teams the Bulldogs beat by a combined 85-6--- the season started with a solid win over a solid team, Father Tolton.

"You could tell there was a lot of pressure taken off their shoulders, because that was the first competitive situation this team had ever been in," Hess said. "So to come away from that game with a win against a good team, that went a long way.

"You could just see the confidence building in the guys ... that was a big one for us."

The defense has been especially good in the early going. After giving up a first-quarter touchdown to Tolton, the first-unit defense hasn't given up a score since.

On top of that, South Callaway would've had back-to-back shutouts if not for a long touchdown run by Wright City in the final 80 seconds last week.

"The biggest thing that stands out is our speed," Hess said. "We have a lot of good athletes, but we're not real big, even up front. It's just about our speed.

"That works really well with what we try to preach on defense, we're all about swarming and punishing. We try to get as many helmets to the ball as possible and the faster we can get there, the better."

Among the defensive standouts are 6-2, 240-pound senior noseguard Ben Shumate, who has the ability to "push everything to the left or the right," Hess said; linebackers Bennett Hager, a senior who missed last season with a knee injury, and junior Kaden Helsel; and sophomore Peyton Leeper in the secondary.

Most of the guys play offense, too. Of course, this is no surprise.

The team only has nine seniors and most of them play on the line. Joining Shumate are Darrell Risch, Braeden Sconce and Brandon Aggus, who are leading the way for a junior-dominated backfield --- running backs Dalton Stone and Helsel, and quarterback Landon Horstman.

Horstman ran for two touchdowns and threw for a score in the win over Wright City.

"He's a very good football player, in general," Hess said. "But he's been doing a great job of running our offense, taking command, and being a leader."

There certainly aren't many familiar names remaining from the Bulldogs' 14-1, state runner-up team from 2014. But this year's team has seven returning starters on offense and six on defense --- and a head coach who's also in his second year.

"Last year was a great learning experience in terms of the speed of what you have to do as a head coach," Hess said. "Everything just happens really fast. This year, and knowing what to expect and getting into a routine, things have slowed down.

"There are so many things that go on behind the scenes that as an assistant coach, that you just take for granted."

The next step in this season's journey is a fairly big one, the 20th game in the Callaway Cup series. The series has been an odd one --- North Callaway won the first 12 meetings, South has won the last seven.

The Thunderbirds enter this bout at 2-1.

"We know it's important to the community and we know what's at stake," Hess said. "But at the same, we try to treat it just like any other game. It's not going to make or break our season, no matter what happens.

"But when you have the radio stations there, the TV cameras there, and the smell of hot dogs in the background, it's exciting, it really is. It adds a little extra flavor to the game."

To be sure, there will be bigger games to come for the Bulldogs --- in late October, for example.

"We're taking it week by week and we have goals that we've set," Hess said, "but we definitely want to have a better end to our season this year.

"I think they'll remember how it ended last year and when it comes to that time, hopefully it will give them a little extra juice."

The South Callaway Bulldogs will carry a 3-0 record into Friday night's Callaway Cup clash with North Callaway in Mokane. 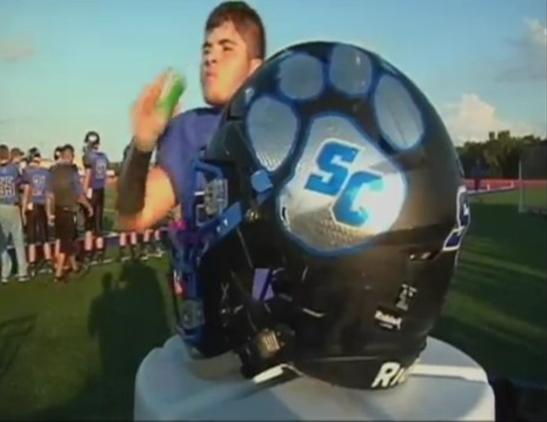