COLUMBIA, Mo. --- The SEC Network has a preseason series featuring every team in the conference.

Every team is given 30 minutes. Fair, equal, balanced ... you know the routine.

Let's just say it's easier to fill 30 minutes about Alabama than it is Vanderbilt. Or Kentucky.

The Tigers' segment is called Worth the Wait. Sure. For the first time in nine months, it's Game Week for Mizzou after all. If nothing else, the wait is over for tailgating with friends you haven't seen in, well ... nine months.

Those three words for the segment are fine, but the punctuation is lacking.

Worth the Wait? would be more accurate.

As Tiger fans hold their breath, Missouri plays its first true road game in a season opener in 20 years this Saturday at West Virgina, where the Tigers are 10-point underdogs.

Mizzou fans need a football-sized breath mint to get rid of the taste from last season, which was a disappointment on the field and a disaster off it.

Here are just a few of the "highlights" from the Season of Our Discontent, Fall, 2015, and the months leading up to this season:

(If you were curious, Mauk transferred to Eastern Kentucky for his redshirt senior season and is listed second on the depth chart heading into the team's opener at Purdue on Saturday.)

* Jonathan Butler goes hungry. His hunger strike was the poster child for the racially-charged campus unrest.

Ironically, here's a portion of a story about Butler on the website Heat Street, talking about what would be called his "anti-hunger strike" a few years ago:

In a blog post from August 2011, titled “My Summer Breakfast Experience,” Butler describes how, for 61 days, he swung by a hotel before work and “decided to indulge myself with ‘free’ breakfast items.”

Butler describes trying to get caught stealing food, making goofy faces in the camera and making sure staff got a good look at his face.

“Beyond even pure sport it was a [sic] adrenaline rush to find out when someone would approach me about partaking in this ‘free’ breakfast,” Butler writes. “Each passing day built up with more and more excitement and the anticipation of the hunt. The mere fact that confrontation was just around the corner drove me wild with passion.”

What was Butler trying to accomplish? He writes: “Now ideally in my mind I wanted S.W.A.T. team members to drop from the sky, tear gas to be thrown while I has [sic] attacked by 5 different german shepherds, and beat like Rodney King. But in my disappointment I was only greeted at the front by two managers.”

* In support of Butler, the football team goes on strike.

* Both Butler and the team end their strike after the hierarchy at MU was dismantled --- both the president and chancellor stepped down.

* Barry Odom, untested as a head coach at the college level, was hired.

* Missouri Athletic Director Mack Rhoades resigns --- after 14 forgettable months --- and hightails it back to Texas. The school goes through a series of interim ADs in a short period of time, before hiring a gentlemen from San Diego State that nobody east of Utah had ever heard of, Jim Sterk.

With plummeting enrollment comes less recruiting talent. This year, you may not feel it as much. But in the coming years, it looks bleak.

Last season also wiped out an age-old football adage that football wins championships, because Missouri's defense was very, very good. Best in the SEC, Top 10 in the nation ... but the Tigers went 5-7, thanks to one of the worst offenses in the nation.

You kinda need both.

Sophomore Drew Lock returns at quarterback after struggling mightily behind a porous offensive line, injuries at running back, and little talent at wide receiver.

"I feel like Drew's learning experience from last year has helped him to this point," Odom said Monday after naming him the starter. "He's grown up a lot. His leadership skills are among the best on the team."

Mizzou is now known as Defensive Line U and the Tigers, once again, will have players destined to play in the NFL, led by 6-3, 260-pound redshirt junior Charles Harris.

Harris has already received several preseason honors, including an All-SEC pick and being named to the Ted Hendricks Award Watch List, an honor that goes to the best defensive end in the nation.

"I'm excited to watch him compete," Odom said. "He looks like a different player this season, in a good way."

Jefferson City redshirt junior Joey Burkett will start linebacker at West Virginia, becoming the first ex-Jay to start for the Tigers since Terrell Resonno in 2011.

"It's awesome to see him in that spot," said fellow linebacker Michael Scherer, who's returned for his senior year. "He knows where to be at all times and he does it well."

So, here we go, Chapter One of the Odom/Post-Jonathan Butler Era.

"I get one shot at this, and I've got a lot of people that are counting on me to do it right," Odom said. "There's a lot of people here at the University of Missouri that care deeply about this program and our athletic department.

"The state of Missouri is important to me to represent the right way. There's a whole bunch of former players that I owe them to do it right, and there won't be a day ever that I forget that."

You want the Tigers to succeed for many reasons. Barry Odom is one of them. Good guy, hard worker, just like Kim Anderson.

Worth the Wait? We'll see.

At the very least, Tiger fans will be holding their breath this Saturday, the rest of this season, and for the next several years.

Let's just hope they don't end up holding their noses.

Barry Odom begins his first season as head coach of the Tigers on Saturday at West Virginia. 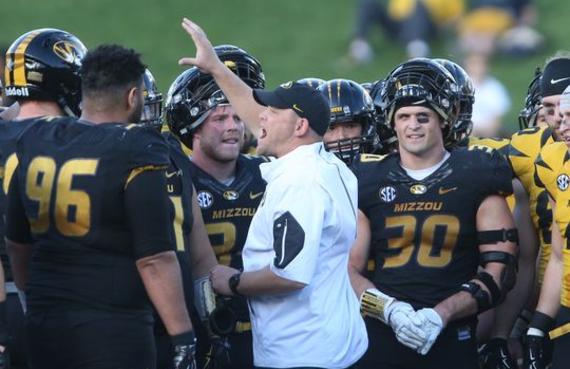