In fact, they were downright rude.

At the same, our guests sure didn't bring much to the table.

There have been a lot of Jays/Crusaders Friday night/Saturday doubleheaders through the years. And when we say a lot, we mean a LOT.

It's safe to say, the total margin of victory has never been 127 points.

In the first half of the two games --- a span of four quarters or the equivalent of one game, obviously --- the home teams outscored the visitors 111-6.

"They did a great job (Friday night) and I'm really happy with how our guys played (Saturday)," Helias coach Tim Rulo said. "I'm sure coach (Ted) LePage would say the same thing, that all you can do is play the teams on your schedule.

"In the end, you have to take what you've got, go out and play, and try to do great things."

They did, but these were mismatches of uncomfortable proportions.

As for Saturday's victim, you still shouldn't feel sorry for football-challenged Southeast, which went 1-17 the previous two seasons. Instead, you should feel sorry for Van Horn. Why?

It could always be worse, sports fans.

"This was one of those games," Rulo said, "where you may have made a mistake here or there, but it doesn't show on the scoreboard. In some ways, it's a good thing, because you don't want to lose. But it also shows you the areas we need to get better at."

The Class 3 Knights (1-1) received the opening kickoff, lost eight yards in two plays, and also lost a fumble that was recovered by Caleb Albertson at the 21.

Two plays later, Kaleb Davis scored the first of his two touchdowns from three yards out, it was 6-0 just 75 seconds into the game and ... here we go again.

That was one of five turnovers forced by the Helias defense, which also had six sacks.

"I feel like our defense has played so much better this year," Rulo said. "I'm really excited about that. What I'm most passionate about is having a defense that is very, very salty. So to me, this what they should look like and I'm really proud of them."

The Crusaders (1-1) held a 14-0 lead after one quarter, before scoring three touchdowns in less than four minutes of the second on their way to building a 42-0 halftime lead --- a half in which they outgained the Knights 235-36.

"We wanted to come out fast and do the things we needed to do," Rulo said. "Overall, I thought we did a pretty good job of that."

Thanks to the running clock, Helias slipped the margin to 49-0 after three quarters and 56-0 early in the fourth, before Southeast scored on a late tipped pass in the end zone to avoid the shutout.

Helias scored all eight of its touchdowns on the ground, including another score by Davis, this one from four yards.

In all, 12 different Crusaders had rushing attempts.

"That's something our offense can really do, be able to get different guys touches," Rulo said. "It makes us that much harder to defend."

There was no defending our home teams this weekend, that's for sure. 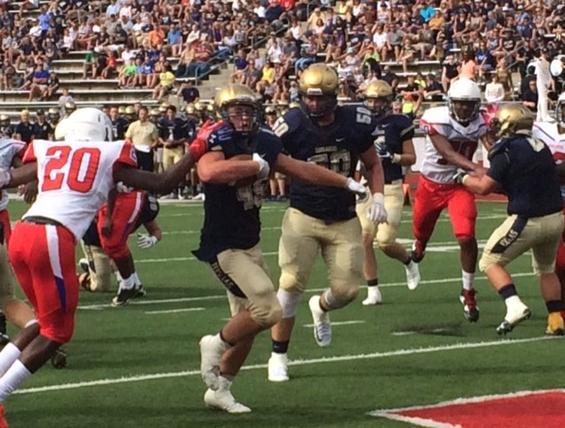 Jake Burnett scores on a 7-yard run for the Crusaders during the first quarter of Saturday's game with Kansas City Southeast at Adkins Stadium.