JEFFERSON CITY, Mo. --- Friday night was the first time since 2003 a team from Springfield had played Jefferson City in football.

Our friends from the south may want to re-think this.

It was not worth the wait. At the very least, it wasn't a lucky 13-year wait for the Central Bulldogs.

Unless not losing by 78 points is lucky.

In a brutal and uncomfortable mismatch, the Jays overwhelmed the undermanned Bulldogs 83-6 at Adkins Stadium, in a game that was done long before your first bag of popcorn.

"I think our players jumped up and almost overwhelmed them, at times."

You could say that.

"Once the game got out of hand," LePage continued, "it gets uncomfortable, because I'm a coach, I like young people. Anytime you get to that point, you feel for the other team. As much as you want to win, you also want the other team to be at their best.

"I don't think they were at their best tonight."

That would be kind. But then, nobody ever said Ted LePage isn't a nice guy.

Class 5 Central only has two seniors on its roster and it showed in a painful way. The game landed on Jefferson City's schedule when former Missouri Tiger Lorenzo Williams, then the Central head coach, called LePage and wanted to play.

"Last week when I saw McCluer North in warm-ups, I thought ... 'Uh oh.' They looked a lot better live than they did on film," LePage said. "Springfield Central, when they walked out, you could just see there wasn't a lot of size and there wasn't a lot of speed. You knew they were going to have a hard time with it.

Dennis "Big Game" Barnes returned the opening kickoff to the 40 and the Jays went the distance in three plays, capped on a 1-yard toss from Gunnar See to Adam Huff to make it 7-0.

* Elijah Jackson, 22-yard interception return, 14-0, 9:49. That was already the fourth interception for the Jays this season, a span of just four quarters, 2 minutes, 11 seconds.

"We played extremely efficiently in the first quarter, in all three phases," LePage said.

* Barnes, 50-yard punt return, 21-0, 7:28. This was every coach's dream, to have his team score in all three phases --- offense, defense, special teams. And the Jays had done it in less than five minutes.

Has he ever seen anything like it, this happening in the first five minutes?

* See, 14-yard run, 27-0, midway through the first. A Barnes interception set it up and See scored the next play.

"I think we have more depth this year than we've had in several years," LePage said. "So for our second team to get so much film against a varsity opponent, that will be a great learning tool. That's going to do nothing but help us down the road."

In the second quarter, when the lead ballooned to 69-6 at the half:

In the third quarter:

It was a staggering 77-point margin, but rest assured, it could have been worse. A lot worse.

"We're going to do everything we can to win the football game," LePage said, "but after that, we become people of compassion. They earned our respect for putting us on the schedule."

The Jays, who outgained the Bulldogs (0-2) 372-40, will fulfill the two-year contract when they play in Springfield next season. After that, perhaps you shouldn't look for another meeting for a while.

"If I were a betting man," LePage said, "I think I'd agree with that."

Jays win 83-6: This wasn't worth the wait for Springfield Central 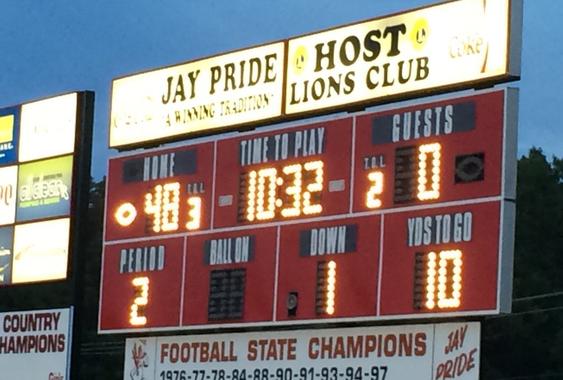 The busiest person in Central Missouri on Friday night may have been the scoreboard operator at Adkins Stadium.