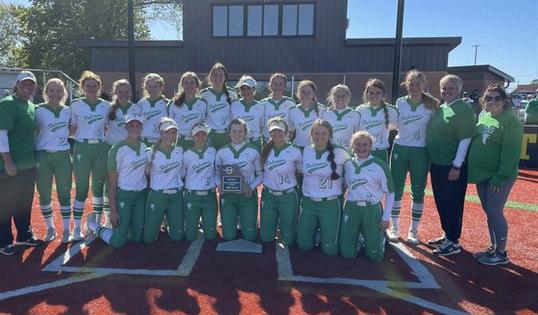 WARDSVILLE, Mo. —- It’s the time of year for pumpkins, spiders the size of pumpkins, and the Blair Oaks Lady Falcons to go to the softball Final Four.

Just because it seems to happen every year, however, you shouldn’t take it for granted. Ever.
They just don’t throw the Green uniforms out on the field and win year after year, it’s new players working their tails off year after year.
“It’s always special, because every year a new team is formed with new kids,“ said Blair Oaks coach Sharon Buschjost, as the top ranked Lady Falcons (30-4) prepare to face No. 4 Sullivan (26-9) —- the defending state champion —- in the Class 3 semifinals at 2 p.m. Friday in Springfield.
Under Buschjost, who recorded her 500th career win this season, the Lady Falcons have become one of the top programs in the state. The only thing that’s kept them from being the best program in the state is the October frustrations once they’ve reached the Final Four.
This marks the 12th time in 13 years Blair Oaks has made it to the Final Four, but only the 2009 team was able to bring home a state championship.
“In 2009, we were able to win state,” Buschjost said. “Have we had other good teams since then and did we have other good teams before that?
“Definitely.”
For the 2021 Lady Falcons, that was then and this is now.
“They know the program has had success,” Buschjost said, “but they don’t know how many times we’ve been to the Final Four in the last so many years.
“They are just concentrating on this year, the here and now.”
That may be good enough. “Is there something about this team that makes me confident we can win it this year? Absolutely.“
So what makes Blair Oaks —- which set the school record for wins this season – – – so good? Is it offense, defense, pitching?
Yes. The Lady Falcons are the total package.
“The consistent hitting in all spots of the batting order has been key,” Buschjost said. “That we’ve been able to put runs together and that combination with Andi in the circle, giving up one run a game, you’re going to win a lot of games.”
Andi would be dynamic senior Andi Siebeneck.
“Andi in the circle (21-2, 1.02 ERA, 246 K and only 19 BB in 144 IP) and Andi as a hitter (.461, seven HR, 42 RBI, all team- highs) ... she has definitely been there all year for us,” Buschjost said.
And the rest of the team has followed suit.
“We’re not a high maintenance group, they’re pretty laid-back,” Buschjost said. “The team has confidence in the seniors and Andi’s leadership in the circle, and that feeds down from one player to the next.“
Two more wins for this team would mean state championship No. 2 for this program. And it would take quite a load off the shoulders of this head coach.
“It would mean a great deal to me,” Buschjost said. “Personally, it’s been extremely frustrating and disappointing to get to that point and come up short.
“But more than anything, I would love for this team to get to the championship game and win it, just so they can and have that experience.”
Keep the faith.