JEFFERSON CITY, Mo. --- If you've watched football for a few years, you've probably picked up on this:

Your chances of winning are greatly improved when the other team doesn't score.

"I was really, really pleased with our defensive effort because at times, we made it look like we were as fast as they were," Jefferson City Jays coach Ted LePage said of his team's 38-0 season-opening whitewashing of McCluer North last Friday.

"Our defensive pursuit of the football was probably as good as we've had in several years. I think our defense played with a lot of confidence and they're playing together really well."

A win over McCluer North is hardly anything new --- it was the ninth straight year the Jays have beaten the Stars. The all-time series, which includes a 53-0 rout in the 1988 state championship game, now stands at 11-0.

"That was a lot better football team that we thought we had scouted," said LePage, in his 11th season with the Jays. "When they showed up, they were physical, they were in shape ... they were more on top of it than most McCluer North teams we've seen in a while."

The Jays pitched the shutout it with a first-year defensive coordinator, Cameron McDaniel, who replaced longtime stalwart of the program Ron Cole, who retired after last season.

"I think coach McDaniel and the staff did a tremendous job of preparing the kids, they executed the game plan, and they played free," LePage said. "It's so easy to panic in your first game, but I saw no panic.

"What we have to do is play consistently throughout a series."

The Jays played consistently throughout the game, before the second unit put the icing on the shutout cake with an interception in the end zone as time expired.

Nobody was happier to see it than the first-unit players.

"It's the first time in several years," LePage said, "where our ones were up and they were coaching our twos. This is a really close-knit team, they really like each other and they pull for each other ... there's no pouting going on. It's just a bunch of guys saying: 'Hey, let's win this thing and let's have some fun.'

"When Cameron Billings had that interception, our ones may have jumped higher than the coaches. There's nothing bad when players enjoy the success of other players."

That was one of five turnovers the Jays forced, three of those on interceptions. "And we felt like we could have had five," LePage said.

The offense wasn't overwhelming, to be sure, but it was good enough.

"We had three first-time starters on the offensive line, so we knew there'd be some struggles," LePage said. "There were some things we tried that were not successful. But when you score 31 points as an offense, you can't be too upset."

They say --- and they say a lot of things, don't they? --- that teams normally make its biggest improvement between games one and two.

The Jays have climbed to No. 3 in the state poll, which is good. But what does it really mean?

Not much, because rankings before Labor Day are nearly as useless as a wool sweater in August. Still, LePage saw some possible good signs a lot earlier than August.

During a team camp in Bentonville, Ark., this summer, one of Jefferson City's scrimmages was against Oklahoma powerhouse, Tulsa-Jenks ... and the Jays scored three touchdowns and held the Trojans scoreless.

Jenks head coach Allan Tremble liked what he saw .... but not from his team.

"He came up to me and said: 'You all will have a lot of fun this year,'" LePage said. "We do have some ability to play this game and if we continue to have the drive to work ... how good can we be? I don't know, that's only going to be determined when we get to the playoffs. But for right now, our team is working to be better this Friday night (at home vs. Springfield Central) than we were last Friday night.

"I think we've put ourselves in a great position because of the work ethic these young men have."

Rashaun Woods (22) scored on a 6-yard run during the Jays' season-opening 38-0 win over McCluer North on Friday at Adkins Stadium. 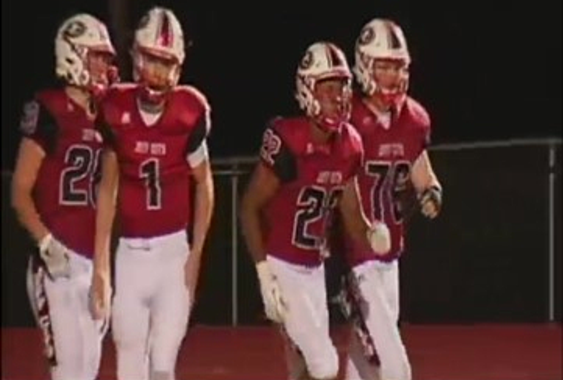