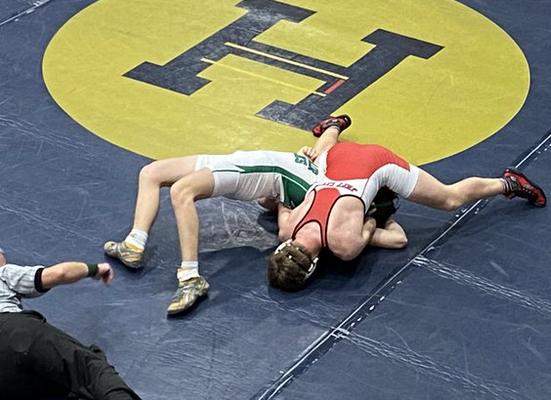 In this year of adjustments,

JEFFERSON CITY, Mo. --- The Jefferson City Jays wrestling room is like a steamy greenhouse without the glass ceiling and sunshine.

It can be a bacteria's play house, a dream home for germs.

"One of the best things we've done is to buy a machine that basically cleans and disinfects the room, it's on about 24 hours a day," Jays coach Phil Cagle said. "It takes that stuff out of the air, it even takes it off your skin.

Originally, it was purchased to battle one of a wrestlers' maladies, ringworm, along with other skin infections.

"We haven't had a case of ringworm yet," Cagle said.

Call this fortunate foresight --- very fortunate --- because the machine is also apparently handling the much bigger problem in 2020.

"We haven't had a case of Covid traced back to the wrestling room yet," Cagle said. "Not one."

The technology has been a huge help in this fight, probably the biggest weapon the Jays have in their arsenal. But like the rest of our lives' this year, it's just a part of the precautions Cagle is using.

Along with practices being broken up into quads, wrestlers have the same practice partner every day, "so we're not getting a lot of different kind of contact," he said, and the workouts aren't as long.

"We try to get as much done as we can in a shorter time," Cagle continued. "And we're not cutting as much weight, because we don't want the kids to get sick and wear the body down.

"The kids just want as normal a life as they can get, just like everybody else."

"Wrestling is still wrestling," Cagle said, "you have to learn the moves."

In this time of adjustments, the Jays --- for perhaps the first time ever --- won't be traveling to Kansas City or St. Louis this season due to Covid restrictions in those areas. Those schools, however, have been allowed to travel out of their area.

But the biggest disappointment is the cancellation of the annual holiday tournament trip.

"That's something we've done for about the last 10 years," Cagle said. "We've gone to Oklahoma, Kentucky, Tennessee, Minnesota ... it's something the kids really look forward to.

"I really feel bad for our senior class that they're not going to have that experience."

In addition, the field for this season's annual Capital City Tournament in January has been cut in half to only six teams, and will be held in one day. That will be the rule for high school wrestling in Missouri this season, even the state tournament.

There will only 12 state qualifiers per weight class instead of the normal 16. The state tournament will be reduced to one day instead of three, and will be held at different locations for the four classes.

Those locations have yet to be announced.

On the mats, the Jays have five returning state qualifiers led by senior Brant Aulbur, who finished third at 220 pounds at last year's state tournament.

"He's unorthodox," said Cagle, who's in his 21st year with the Jays, the last 10 as head coach. "He's a tall kid but he's really flexible, so he can hit some moves that most people can't hit.

Apparently, Aulbur is just entertaining off the mat as he is on it.

"He's one of the funniest kids you'll ever be around your entire life," Cagle said. "He's hilarious, he's really smart, he makes great grades.

"Anytime I'm taking myself a little too seriously, he can bring me back to reality."

All of us want to get back to reality, much sooner than later.

"It's been a very difficult year," Cagle said. "They can't even eat lunch with their friends in the cafeteria, they have to go back to their classrooms. But our kids are doing a great job of adjusting.

"We're just thankful for every day we get to go in the (wrestling) room, spend time together, work out together and get better. Everything is just a day-by-day thing and hopefully, we can try and reach our goals.