Some Blair Oaks Falcons discuss strategy under a tent during the second half of Saturday's game with Lutheran North in Wardsville.

​JEFFERSON CITY, Mo. --- If you're sitting still, you're going backwards.

The Jefferson City public schools are choosing to move forward, as the Board of Education voted to fund the addition and completion of athletics facilities at both Capital City and Jefferson City high schools Monday night.

These projects will ensure facilities are equitable between our two high school campuses as promised in the J+C campaign, according to a press release from the Board. The projects will also eliminate the use of off campus athletics facilities, improving safety and efficiency for students and staff.

Last year, the district hit pause on our plans to address overcrowding in grades PK-8 to allow for more time to fully develop a long-range facilities plan. The COVID-19 pandemic and development of a re-entry plan required those plans to be paused even longer.

However, the district is now in the process of developing our long-range facilities plan and anticipates bringing a bond issue to address overcrowding in grades PK-8 to the board and voters in 2022.

The approximately $20 million in athletics facilities projects will be funded through a Certificate of Participation, the release continued, which is a funding mechanism similar to a standard loan that is commonly used by public municipalities.

The district will be taking advantage of historically-low interest rates to budget $1.5M per year from the capital projects fund over the next 20 years.

With the board’s approval, the district will now solicit bids for a construction manager at risk, and hopes to begin construction in May, 2021. Our goal is for fields to be playable during the fall 2021 season, although some amenities (bathrooms, locker rooms) may not be fully completed by the start of the 2021-2022 school year.
At Capital City, projects include;
^ A dual-use press box that will serve both the football and soccer fields (two separate fields), as well as bleachers, locker rooms, concessions and restrooms for the two sports.
^ At the baseball/softball complex, construction of a press box, dugouts, restrooms, concessions and storage area.
After the 2019 tornado devastated homes across the street to the west of Adkins Stadium at JCHS, homeowners approached the district about acquiring those properties. The purchases were made at a cost of $3 million.
That property will be used for:
^ A soccer field and baseball/softball field, with a dual-use press box, concessions, restrooms and storage use between the fields, as well as bleachers for both.
^ Across the street just south of Adkins Stadium will be the construction of eight-court tennis complex with all the amenities.
IIIIIIIIIIIIIIIIIIIIIIIIIIIII
More than this simply being an attempt to stay ahead of the game, it's an attempt to get back in the game at the well-established Jefferson City HIgh School. Capital City High School, of course, is just in its infancy, so this should help build the foundation for future success.
This is an investment in our youth and these will certainly be dollars well spent. Studies have shown that successful athletic programs --- particularly football --- help schools become more successful in all areas and activities, including academics.
Please visit www.jcschools.us to view full project details. 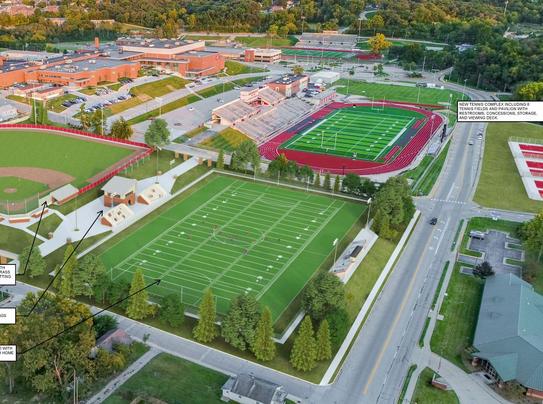 It was perfect
finish to perfect
season for Helias