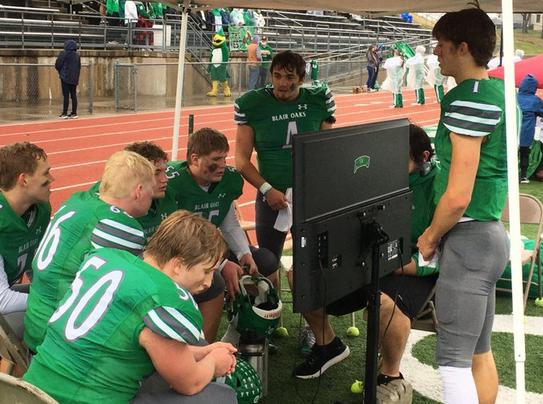 WARDSVILLE, Mo. --- Lutheran North has more talent than Blair Oaks, we know this.

You can't swing a chin strap in that locker room without hitting a a Division I player, including' 6-4, 235-pound senior gem Travion Ford, who's committed to Mizzou.

You can't teach that kind of talent, you either have it or you don't.

But you can't teach heart, either, you either have it or you don't. And that was the edge the Falcons had entering this one. A big edge.

It was the Falcons' heart that kept them in the game in the first half when talent was winning out.

And it was the Falcons' heart in the second half that turned a halftime deficit into a blowout win.

Jayden Purdy and Jake Closser both scored three touchdowns and the fourth-ranked Falcons erupted in the second half to explode past the top-ranked Crusaders 44-9 in the Class 3 quarterfinals Saturday at the Falcon Athletic Complex.

Ritter, like many other St. Louis-area schools, missed the first five weeks of the season due of Covid.

Back in Wardsville, we've seen this kind of effort before from Gang Green.

That should be on a T-shirt.

The top-ranked Crusaders (10-2) --- the defending Class 2 state champions --- started the game like they meant it.

They put together a 13-play drive to open the game before settling for a 32-yard field goal. Little did we know, those would be the only points scored by the Crusaders offense all day.

With nine minutes left in the half, a backwards pass was muffed by North and Blair Oaks recovered at the 12. That led to one-yard touchdown plunge by Purdy --- that was his only carry of the first half --- to give the Falcons a 7-3 lead.

It appeared it would stay that way at the break when the Falcons got it deep in their own territory with time running out. But a questionable pass attempt was intercepted by Toriano Pride, who returned it 28 yards for a touchdown with just 16 seconds left in half to give the Crusaders a 9-7 lead.

Lutheran North ran 38 plays in the first half, Blair Oaks ran just 15. And the lead was only two.

So you just had this feeling ...

The Falcons got the ball at the 30 to start the second half and after an incomplete pass, the next play seemed to set the tone for the rest of the game --- a blast up the middle by Purdy gained 46 yards to the 24.

That was the start of a beautiful sequence by Purdy. He followed that with a 17-yard run, then scooted around left end for a 7-yard touchdown sprint to give the Falcons the lead for good at 15-7.

The Falcons had 31 yards of total offense in the first half ... they had 70 yards on that drive.

Dylan Hair started becoming a factor, as he hooked up with Closser for a 27-yard touchdown to make it 23-9, and Closser then made it 30-9 when he scored from 11 yards out on the jet sweep around right end late in the third quarter.

We spoke of the Falcons' heart? Well, the Crusaders started showing their lack of same --- their bodies were still in Wardsville, but their football souls were already in Kingdom City headed home by the time the third quarter ended.

Blair Oaks would roll up 319 yards in the second half, when Purdy rushed for 127 yards on 14 carries. He would end the scoring on a 2-yard run with two minutes left, after Hair had tossed a 21-yard scoring pass to Closser.

From a two-point deficit to a 35-point win in a blink.

Never, ever count out Ted LePage, his coaching staff and these young men. Because when you have the heart of a champion, it doesn't matter how much talent the other guys have.

If they don't have the hearts and fight to match, it doesn't matter.

Heart of a Champion: Falcons
explode past Crusaders, 44-7

Some Blair Oaks Falcons discuss strategy under a tent during the second half of Saturday's game with Lutheran North in Wardsville.