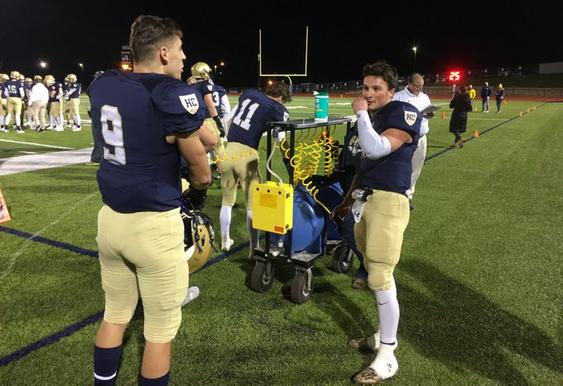 Catch them if you can.

So it's no surprise what the Zizzers like to do with a football ... run. The second option may be run, but the third option ... well, it's run, too.

To their credit, West Plains did not run away from the challenge of playing Helias.

After not getting tested all season, the Crusaders --- and their fans --- got their money's worth. This is all they could possibly want, and it was nearly more than they could handle.

In a heart-stopping affair, the top-ranked Crusaders jumped out to an early 17-0 lead and then held on by the tips of their fingernails in the final minutes to turn back the fifth-ranked Zizzers 36-30 in the Class 4 quarterfinals at a blustery Ray Hentges Stadium on Friday night.

In this instant classic, we'll begin near the end.

Alex Clemente scored on fourth and 1 late in the third quarter to give the Crusaders (12-0) a 36-20 lead heading to the fourth. With seven minutes left, the Zizzers (10-2) got back within 36-28 on a 42-yard pass from Dagon Kenslow to Heston Miller, and Kenslow's 2-point conversion pass.

Yes, the running Zizzers did their scoring damage through the air --- three Kenslow touchdown tosses and that 2-point pass.

Their other touchdown? On a pass interception return.

With it down to a one-score game, the teams swapped punts and Helias got the short end of the swap, as it resulted in the Crusaders starting a possession at their own 1 with 4:40 left.

To add to the intrigue, Helias had gone three-and-out in its two previous possessions

After the Crusaders picked up two first downs, their punt attempt was blocked and the Zizzers took over at the 12 with less than two minutes left

Two runs made it third and short inside the five, and Titus Seley picked up the first down and was stretching for the end zone when he fumbled, and Gage Wilde recovered for the Crusaders at the one.

With the Zizzers out of timeouts, Helias figured to just run out the clock on a pair of dives into the line. Instead, Alex Clemente was tackled in the end zone for a safety and it was 36-30 and the Zizzers were getting it back with just over a minute left.

But after picking up one first down, the game ended on downs and the Crusaders had escaped.

This one started as most games have for the Crusaders --- a blowout in the making. Last week, it was 21-0 before your seat was warm; two weeks ago, it was 28-0 one play into the second quarter.

Helias bolted to a 17-0 lead in this one, started on a 22-yard field goal by Vinnie Calvaruso, followed by a 19-yard pass from Jake Weaver to Damon Johanns to make it 10-0 late in the first quarter.

The opening salvo ended up in the opening of the second, as Weaver scored on a two-yard run.

This is the point in the game when it's turned from bad to ugly for the Helias' opponents, but West Plains stood firm --- for a while.

The Zizzers scored two touchdowns through the air a 3 1/2-minute stretch, starting on a 17-yard pass from Dagen Kenslow to Kyler Stowers. After an interception, the Zizzers, cut the margin to 17-13 on a 12-yard pass from Kenslow to Connor Lair on an unlikely 4th and 6 effort.

After the Crusaders regained a 23-13 halftime lead on a 12-yard run by Isaac Lopez, the margin went back to 17 when Weaver tip-toed down the sideline for a 20-yard score on the first possession of the second half.

In this suddenly back and forth battlle, that was the back ... here came the forth.

After a West Plains drive ended on downs, Weaver's pass was picked off by Lair who returned it 40 yards for a touchdown and it was 30-20 with four minutes left in the third.

That set up the fantastic finish and the Crusaders' magic number to two --- two more wins to a capture  state football championship.

The next step in the journey will be a semifinal game next Saturday at 1 p.m. at Smithville at (10-2).