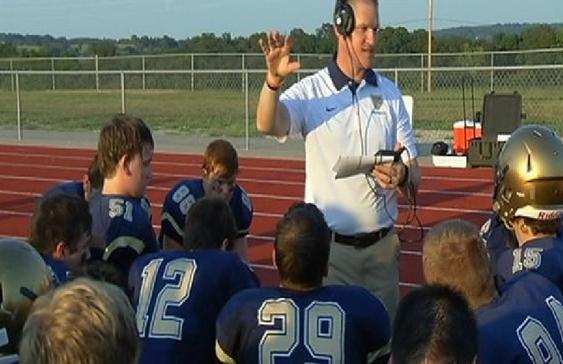 Tim Rulo is entering his second year as head coach of the Helias Crusaders, who open the season Friday night at Hannibal.

Rulo keep the faith, staying the course in second season at Helias

By most any standard, Tim Rulo is a nice guy. A grounded, faith-based, nice guy.

Likewise, by any standard, 4-7 isn't all that great.

"I think the biggest thing I took away from last season is that you can't expedite trust," said Rulo, who's entering his second season as head coach of the Helias Crusaders.

"As coaches, we definitely believe in what we're doing, we have a lot of experience, etc., but there's no way you can expedite or fabricate trust. It just takes time. You just have to be willing to roll up your sleeves and put in the time and effort, that's the only way that trust and those quality relationships can be formed.

"You wish you could speed up that process, but you just can't."

It was a tough year for everybody, especially the seniors. But ...

"I was so impressed with our senior class," Rulo said. "No one wants to be that class, the class that doesn't win the district title or doesn't have a winning record, the class dealing with a new head coach ... nobody wants that.

"But I was so proud of them, they were phenomenal. They've been awesome since, they're true Crusaders, they've stayed in contact with the program and they've stayed loyal to what we're trying to do."

Rulo didn't finish first at his last coaching stop, either, but he did finish second. He led the South Callaway Bulldogs to a historic 14-1 season in 2014 --- a season in which they outscored their opponents by a hard-to-fathom 753-109 and finished runner-up in Class 2.

Rulo came to Helias when one of the school's favorite sons, Phil Pitts, left to join Gary Pinkel's staff at Mizzou. But then Pinkel resigned, Barry Odom was hired and Pitts lost his position, and he's now head coach at St. Joseph Central.

"We're not fibbing anybody around here --- you had some coaches here at Helias, be it head coaches or assistant coaches, who's been coaching here for a long time and done a great job," Rulo said. "Then all of a sudden, at the drop of a hat, that consistency and that experience was diminished.

"Naturally, there were going to be a lot of tentative people (saying) ... 'Who are these guys? What are they trying to do?' We understand that.

Rulo went through a similar process at a coaching stop at Francis Howell Central.

"I wasn't the head coach then," he said, "but I was a young coach and I really wanted to go in and make an impact. And everybody was like: 'Who is this guy?'

"They just didn't know me, maybe I was a little different from the other coaches they'd had, I don't know. But the second year, the impact I was able to have on the program was certainly greater."

He's expecting the same this year, but remains cautious.

"I'm looking forward to continued development," Rulo said. "But the thing is, you can't speed it up any faster the second year, either. It just takes time, many thousands of hours of grinding away, being consistent, caring, and doing the hard work where people can trust and believe in what you're doing, and that you have the best interest of the players and the program in your heart.

"So last year, I was once again reminded of that, that the awesome relationship that's formed between the coach and his players, you just can't rush it. You have to be consistent.

"We've seen progress, definitely. If nothing else," Rulo said with a laugh, "we know the kids names. But the players understand you, you understand them, they understand your expectations ... there's been so much growth there, 100 percent growth."

Part of the problem last season, a big part, was a rash of injuries. This turned out to be the blessing and the curse in reverse --- last year, was the curse, with so many injuries; this year, the blessing, because those guys who had to play now have varsity experience.

"We have guys who got a lot of varsity playing time, we have guys who now know the system, they're a year into it. You even saw it in the Jamboree (at Blair Oaks last Friday), there was more of a comfortability and smoothness with how things went.

"They were playing faster. You know the saying ... Free the mind, free the feet."

This year's team should have some definite strengths, including three-year starters at linebackers, seniors Jake Burnett and Dylan Gaines; and defensive ends with basketball frontcourt size --- 6-6 senior Caleb Albertson and 6-5 junior Nathan Bax.

"Not many teams are going to roll out defensive ends who are 6-6 and 6-5, I don't care what classification you're talking about," Rulo said.

Replacing the talented Alex Faddoul at quarterback will be Chandler Luebbert, who edged out Curtis Campbell in a battle of seniors.

In the end, this is a performance business, even at the high school level --- but only after a coach is given reasonable time. That's only right, that's only fair. A few more wins in the near future would certainly help the cause, however, and Rulo is convinced it will happen.

"As a coaching staff," he said, "we felt like we were beating on a piece of granite. We were taking a sledgehammer to that rock and we were pounding it as much as we could and one of these days --- Lord willing, it's this year --- that rock's going to break.

"Then people are going to wonder: 'What did you do?' Well, we picked that sledgehammer up last May and we've been swinging it since then, and it's the culmination of that process.

"We're going start winning, I really believe that, I have no doubt about that and I think it will be sooner rather than later. And the sooner we all get on the same page, the sooner the wins will come."