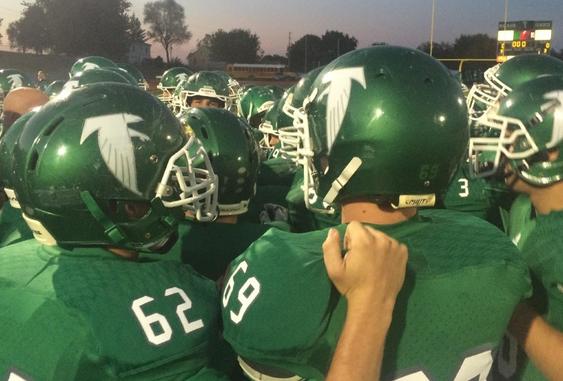 in Walker's second year at helm

Certainly, Terry Walker is feeling some butterflies. But nervous?

"Plus, nervous for me is: 'Holy cow, I'm going into combat and I'm going to get shot at.'"

Walker is entering his second year as head coach of the Blair Oaks Falcons, who kick off the season against Kirksville at 7 p.m. Friday in Wardsville.

He knows all about the above mentioned battles --- both of them --- as he's a 22-year Air Force veteran, 17 years as an active pilot. He retired as a Lt. Colonel in 2013, but still maintains that service regimen. It's a regimen that took some folks a while to get used to last year, as he certainly raised some eyebrows and ruffled some feathers.

"I'm just trying to do what I think is the right thing, the best thing for the kids," Walker said. "If I look the mirror and know I've done that, then I really don't think I need to apologize for my coaching style.

"I certainly know it's old school. I know that it's sometimes probably hard to watch our practices, maybe even hard to watch some of the stuff during our games. But my experience is that these kids are tougher and more resilient than we give them credit for.

"The other thing is that people don't see what goes on inside our locker room after the game's over. People see what they think our relationship is with the kids, but they don't see how I interact with them in the locker room or in the weight room, when it's just one on one.

"I don't think a lot of people have a fair characterization of what I'm actually like as a coach, because they don't see all aspects of what I do."

This year, fewer eyebrows have been raised, fewer feathers ruffled.

Walker works and teaches, but he also listens and learns.

"I had an idea of what the job was going to be like (last year) and in many cases, that was exactly the case," he said. "But like with any position, you have to develop a relationship with the kids and it took me a little bit of time to do that.

"I think there are several lessons I learned, like the traditions at Blair Oaks I did not know about, some things that they take very seriously. It wasn't until about a week or so before the season that I even bothered to have a conversation with them about it. I asked them: 'What do you want to keep doing that I'm not aware of?'

"Once we got on the same sheet of music, regarding some of those things they really valued, it just made the job that much easier for them and for me, I think."

Things the players valued, such as ...

"I had no clue what their pre-game rituals were, as far as taking the field," Walker said. "I didn't realize they said the Lord's Prayer before taking the field and certainly, we started doing that.

"And there's a certain way they like to take the field with coach (Josh) Linnenbrink, and I had no clue about that. Those are things I had not really bothered learning about, and those are things the kids had grown up doing and grown up seeing other teams do.

"So that was a learning point for me, most definitely."

Walker's first year with the Falcons was a splendid one --- 13-1 and a trip to the semifinals, where they lost to eventual state champion, John Burroughs.

"I haven't spent much time thinking about it, honestly, other than that I was so happy for the kids," Walker said. "I knew they wanted to do really well, and they wanted to win a district championship and beat California and all those things that they valued.

"And certainly, I was pleased for the community, because there's always concern about a new coach. It didn't turn out exactly the way I wanted it to, but I thought the kids had a good year."

The Falcons graduated most of that team, however, including quarterback Jordan Hair. His season was, in a word, spectacular --- 34 touchdown passes, nearly 3,000 yards passing, to go along with nearly 700 yards rushing 16 scores.

"Jordan had a great year," Walker said. "Quite honestly, he bailed us out on several occasions. And not just him, but (receivers) C.J. Closser and Adam Schell ... their abilities to make plays got us out of some tough spots.

"We're not really going to try and replace Jordan, we're going to take the kids we have and try to play to their strengths. And we're going to have to be more efficient, offensively, and try to stay out of second- and third-and-long situations."

Taking over for Hair will either be his younger brother, sophomore Nolan, or senior Jake Van Ronzelen.

"We think we have an idea who it's going to be," Walker said, "but I'd rather not say at this point. Whoever it is, they're going to make some mistakes, we know that, because they're inexperienced."

The Falcons have four starters back on offense, five on defense, with senior running back/linebacker Cody Alexander anchoring both units.

"Certainly, he's a kid we're going to rely on heavily, both offensively and defensively," Walker said. "He's a great kid, he's got great character ... I love him to death. I wish I had 62 just like him.

"And the kids recognize Cody's influence on the team, that's why he's one of our three captains. "

The other captains are Van Ronzelen and Brendan Brown for Blair Oaks, which has 15 returning lettermen.

Win or lose this season, rest assured it won't be from lack of effort. Just like last year --- and the Class of 2016 wouldn't have had it any other way.

"That group, at the end of the year, became very appreciative of not just the work that they had put in, but the amount of work the assistant coaches put in on their behalf," Walker said. "I think they appreciated the experience, although it was kind of rocky along the way, from time to time, because it was different from what they were used to.

"All those kids, I feel like I have a very good relationship with them, and I'm in contact with several of them, frequently.  None of them have come up to me and said: 'Coach, I wish I wouldn't have worked so hard.' Usually, it's the opposite, they wished they'd worked a little harder.

"Hard work doesn't guarantee success, but it gives you the opportunity to be successful. When our guys take the field, they know they've earned the right to be there."

The Blair Oaks Falcons open the second season under head coach Terry Walker against Kirksville on Friday night in Wardsville.