The good, the bad, the beautiful:
Thanks for bringing back our game 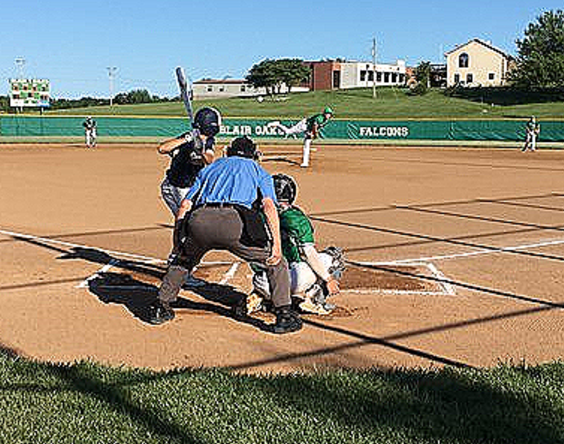 JEFFERSON CITY, Mo. --- It didn't matter if it was a fielding error or a throwing error, it was a wonderful sight to behold.

A walk? Even better, it took longer. At least four pitches.

Wild pitch? Warm fuzzies. Same with a passed ball, a baserunning blunder, or a coach arguing with an umpire.

Baseball was back in all its glory and wonder, the good, the bad and the beautiful.

All of our sports had shut down at all levels --- professional, college, high school --- in mid-March by this cursed virus. We had nothing but re-runs of old sporting events to keep us company.

One of the few good things about getting old is those sporting events are still compelling, because you've forgotten who won.

I still found myself rooting against the Yankees and Dallas Cowboys.

But the last few weeks, baseball returned to our local fields.

On June 2 at Vivion Field, after the pitcher had taken his final warm-ups in the top of the first inning, the infield had taken their final ground balls, the outfielders' tosses were complete, and the umpire had dusted off home plate and walked behind the catcher ... it was time for those magical words we'd waited months to hear.

Splendor in the Grass.

"I just thought: 'Well, it's about time,'" Helias coach Chris Wyrick said about that opener.

"I can't believe it took this long," he continued, "for people to figure out that you have to have some physical activity to survive and function."

Enter the Summer League, which gave us a worthy replacement for the high school spring season.

This year's league --- which showcased most area schools --- had a twist. It's normally for players who are returning next season, as it serves as an extension of their JV season and a tune-up for next spring's varsity season.

But this year, graduated seniors were allowed to compete, giving them a final chance to play together after the disappointment of a lost senior season.

The Crusaders had eight of them who took advantage of this bonus baseball --- and the Helias varsity went a sparkling 15-1.

'In this day and age" Wyrick said, "it's kind of rare having nine seniors. We're going to miss them, because they're such good kids and played so hard.

"This is a class that really got better each year they were in the program."

These seniors were poised to make a serious run at a state championship, especially after going to the Final Four last year.

But they never got the chance.

"You think about all the what-ifs and what-could-have-beens, and it stings a little bit. But everybody's in the same boat, you can't complain too much."

The clear leader of the senior pack was Trevor Austin, an explosively-talented player who's signed to play at Mizzou.

"He had a really good summer for us, some of his numbers were ridiculous," Wyrick said. "I was upset that we didn't get to see him play one more year, he probably would have set four or five (Helias school) records.

"He's definitely in the top two or three guys to ever play for Helias, that goes without saying."

It didn't take long for Austin to make an impact.

"He was ready for varsity as soon as he stepped on campus," Wyrick said, "and not many guys can say that. His work ethic is really good and he just kept getting better each year."

After the thrills and spills of a high school season, summer league games often lack attention span, sharpness and intensity. Outfielders don't quite revert to T-ballers chasing butterflies in the outfield, but it's just not the same.

Not this year. With no high school season, that sharpness transitioned to the summer games.

"Definitely, especially since we were playing with our seniors,"Wyrick said. "They wanted to play and be a part of this team again, so we definitely saw extra intensity.

"That's not what we're about.'

Another difference --- summer games are usually attended only by parents and close girlfriends, and you can cut that number in half when it's hot. Not this summer, as fans came out and treated every game like it was a playoff game against a bitter rival.

"Attendance was a lot bigger than we normally get in the summer," Wyrick said. "I think everybody, both players and fans, treated it as their season."

On a different baseball note --- and after players and owners squabbled over who gets millions and who gets billions for weeks --- the Major League season will officially start on July 23. After playing 60 regular-season games, they'll cobble together some kind of postseason.

Eventually, there will be a World Series champion --- but there aren't enough asterisks in the world to put next to that champion's name.

Well, that depends on who you ask ... like Wyrick.

Baseball fans will certainly watch their Cardinals and Royals games, even if their passion is somewhat subdued.

We also know this --- errors, walks and baserunning blunders won't give these fans the warm fuzzies.
​

Local baseball fields were filled with games in June, which helped ease the sting of losing the high school season this spring.