Hall of Fame career at Eugene 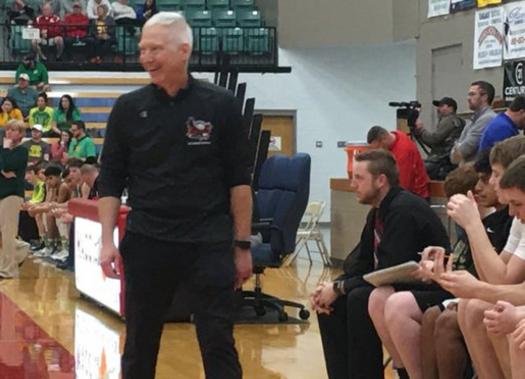 Craig Engelbrecht has announced his retirement after 30 years as head coach of his alma mater, the Eugene Eagles.

In a surprise move to many, Engelbrecht --- one of our great veteran coaches in Central Missouri --- has announced his retirement after serving as head basketball of his alma mater, the Eugene Eagles, for the past three decades,

"I just thought it was time to try something else," he said.

In other words, he's torn up the script, and good for him. But these days, most of us are in the same boat, retired or not.

"Once we get through this coronavirus and everything,"Engelbrecht said, "then I can look down the road and see what I want to do.

"I just felt like the time was right, I've been thinking about it for a while. It just got harder and harder to plan practices, to get ready for practices."

Always an animated and passionate coach, he felt that passion was fading.

With the Eagles, Engelbrecht was 525-287 with eight district championships and one memorable trip to the Final Four, when Eugene lost 85-82 to Portageville in a championship game classic.

"As a young coach, I went to the Final Four in my second year," he said. "That was kind of bizarre to have that happen. Then, you're always searching for that again."

Engelbrecht must have thought this Final Four business was easy, but he never made it back.

"I guess I'm kind of like (Miami Dolphins quarterback) Dan Marino," Engelbrecht said with a laugh. "I kept hunting for it, but never could quite make it back."

Both are also Hall of Famers --- Marino, who went to the Super Bowl in his second season, is in the Pro Football Hall of Fame, while Engelbrecht was inducted into the Missouri Basketball Coaches Hall of Fame in 2017.

Engelbrecht started his career by going 48-28 in three years as head coach of the Russellville girls, before moving back to Eugene and serving as the school's assistant basketball coach and head baseball coach for three years.

His first Final Four experience actually came in baseball, when he led the Eagles to a third-place finish in 1988.

He's proof that you can go home again.

"Everybody told me that it's hard to go back to your home school, but it's worked out well for me," he said. "I've been very fortunate, because Eugene is a special place."

He has a successor in mind, Garrett Haslag, an assistant coach the last four years. Like Engelbrecht, Haslag is a graduate of Eugene and a product of the program.

"Those are my wishes," Engelbrecht said. "I think the board, athletic director and principal will try to see it happen. I hope it works out."

The decision to retire wasn't made hastily. Hardly. When he stopped teaching full time three years ago, he had in mind that this would be his final season.

"This was my last group I had in junior high," Engelbrecht said, "so I always thought this was would my last group in high school."

This senior class was special for Engelbrecht, but he's had 36 years of special, as he's built relationships with hundreds of our young people.

"That's exactly right," he said. "It's been interesting hearing from past players, managers, anybody involved with our program, who've called me up the last couple days and thanked me for what I've done and how appreciative they were to be a part of the program.

"Ultimately, that's why we do this --- the kids you get to coach and the relationships you make for a lifetime."

Make no doubt, Craig Engelbrecht always it the right way. And he did it with class.