The Helias Crusaders celebrate after defeating Webb City in the Class 4 quarterfinals Saturday in Bolivar. 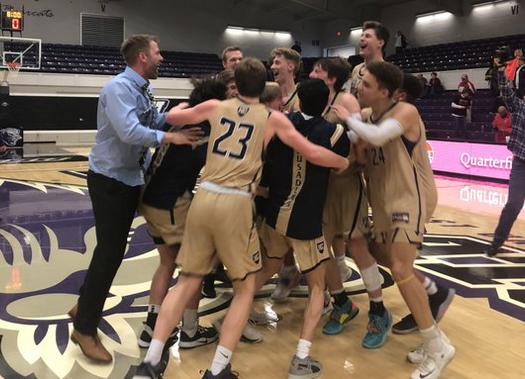 JEFFERSON CITY, Mo. --- When the buzzer sounded to end Saturday's Helias game in Bolivar, little did the Crusaders know it also ended their season, even though Helias had beaten Webb City in the quarterfinals to advance to the Final Four.

These are the times we live in, as the Class 4-5 Show-Me Showdown basketball games in Springfield were canceled Monday due to the Coronavirus. It's disappointing for all involved, but not a surprise.

This is our nation's reality right now, our lives are on hold for the foreseeable future --- anywhere from many weeks to many months.

"I'm pretty much devastated for (our players), they put a lot of work and sweat into the season," Crusaders coach Joe Rothweiler said. "It's going be hard for a while, especially for our seniors.

"We're grateful to have had a great season up until this point, but we're definitely disappointed. I was a nervous wreck that we weren't going to get to play on Saturday

"I give credit to MSHSAA for doing everything they could to try to finish up the season, but when it came down to it, they just couldn't."

The Class 1-3 championships concluded last weekend, but with this situation moving at a meteoric speed in both our society and our sports, this decision wasn't a shock to anyone.

"Not at all," Rothweiler said. "It's definitely a scary situation with everything that's going on. It's hard, but you understand why you had to do to it.

This was supposed to be the seventh Final Four appearance for the Crusaders (23-6, not ranked Class 4), who were trying to win the program's first state championship. Helias was scheduled to meet Vashon in the semifinals on Friday.

By contrast, tradition-rich Vashon (24-5, No. 1) would have been in its 22nd Final Four as it chased it fourth state title in five years and 12th overall.

"We would have had to play really well to have a chance --- we could have played decent and got beat by 30," Rothweiler said. "But you never know."

No, you don't, and that's why we love sports.

"It's going to be hard, not knowing what could have been," Rothweiler continued. "The last week or so has definitely been a whirlwind. We made it to the Final Four and now you don't know what would have happened."

Most schools in the area, like Helias, and the Jefferson City and Columbia Schools Public Schools, will be closed from March-18 until the first week in April. For Helias, that hopeful return date is April 3.

"It will be a miracle if we get back then," Rotheweiler said.

Rothweiler met with the team after school Monday,

"They've seen enough to know what's going on, and to know that people are suffering from it and that people are dying from it," Rothweiler said. "There are folks they know who could be affected by it and they don't want to put them in harm's way.

"But our guys are hurting right now.  We were able to meet as a team and talk through it and it was very emotional, there were a lot of tears, we got our feelings out. But then we had some laughs, not about this situation, but about some things that happened throughout the season and the memories we're always going to have."

After the meeting, something unexpected happened.

"They wanted to play one more time," Rothweiler said, "so we just had some fun playing pick-up games."

Fun was needed, because smiles can be tough to come by these days.