Feeling will certainly be different,

but Final Four games will go on 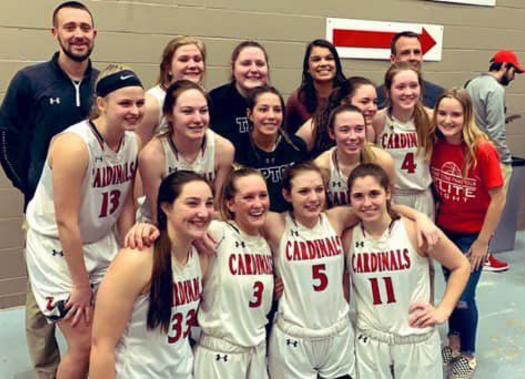 TIPTON, Mo. --- I had a nice conversation with Tipton Lady Cardinals coach Jason Culpepper on Tuesday about the fun and exciting week this was for his team, the school's student body, the entire Tipton community.

The thrills and chills that come with the program's first trip to the Final Four.

Not so much anymore, because so much has changed in 48 hours.

This is a strange, awful, turbulent time we're suddenly living in ... and will live in for the foreseeable future because of the Coronavirus.

Our financial world has been decimated, as has our world of sports. Professional sports have suspended their operations for an indefinite period of time, including the NBA, NHL and MLB. PGA Tour events will still be played, but with no fans.

Now, the repercussions have has trickled down to high school sports. The Final Four games in Springfield will be played as scheduled Thursday-Saturday, but participating schools have been limited to 150 tickets by the Missouri State High School Activities Association.

"Whenever you have 1,000 people who want to go the game and you only have 150 tickets, that's a problem," Culpepper said as we spoke again Thursday. "We've been scrambling to figure out how to get the tickets and who to give the tickets to."

Parents and family were the first to get tickets and if there are any left, those would go to the students by way of a drawing. Other fans are simply out of luck.

"We're obviously disappointed, but this thing is a lot bigger than us," Culpepper said. "This is something we can't control, there's nothing we can do. All we can do is show up, play basketball, and try to stay focused on winning the game."

That will probably be easier said the done.

"Our kids are taking it pretty well," Culpepper continued. "I told them before practice (Thursday) that sometimes you think you have everything going for you, but something happens and it just takes the wind right out of you.

CULPEPPER, 28, IS COMPLETING HIS EIGHTH SEASON with the Lady Cardinals. He breaks up his tenure into two groups or, as the recently remembered Dr. Seuss might say, Thing 1 and Thing 2.

"These seniors are kind of what I've considered my 'second' group," Culpepper said. "My first graduated in 2015, they were the first group I had that had more than two seniors. That team in 2015 went all the way to the quarterfinals, but I felt like we were good enough to get to the Final Four.

"That was frustrating, and we had to wait five more years to finally get there. It felt like forever."

No big thing, because it's here now.

"It's so great, it still doesn't seem real," Culpepper said. "Because for a lot of people, this just never happened.

"When it's all over, it will be nice to reflect back and think about everything that happened, and be proud of everything the kids have done."

There' still work left to be done.

"That's kind of the feeling we have now.,"Culpepper said. "We know we have our work cut out for us, starting with Blue Eye. I think the girls have been focused and they'll be ready to go.

"We're looking forward to the challenge."

As you'd expect, it will only get tougher from here when the unranked Lady Cardinals (25-5) meet the fifth-ranked Blue Eye Bulldogs (27-4) in the Class 1 semifinals at 4:30 p.m. Friday at Hammons Student Center in Springield.

The Lady Bulldogs --- who are also making their first appearance in the Final Four --- made the state playoffs this season for the third straight year, despite graduating four starters from last year’s team.

There's no secret to their success --- 5-6 senior Kohnnar Patton, who scored 17 points in the team's 60-46 win over Mansfield in the quarterfinals. More impressive, Patton is a two-time All-State selection who will play her college basketball at Evangel.

"She's a heck of a player," Culpepper said. "She's what I'd call a point-forward --- she plays point guard, but she's like a power forward the way she plays. She can shoot it, drive it, rebound, and she's aggressive on defense."

"Then they've got some other girls around her who can shoot and play really good man defense."

The Lady Cardinals counter with their own college-bound star, 5-5 senior Abby Backes, one of the favorite daughters of Tipton.

"Abby's a heck of an athlete and even better person," Culpepper said. "She'll help out with younger kids, and she'll be there to help with youth basketball and give the junior high kids pointers.

Backes, who's signed with Columbia College, has put together a stellar career at Tipton, including scoring nearly 2,600 points. She was within 50 points of the school's career mark entering the season.

"I knew she was going get the record," Culpepper said, "but I thought it would take her three games. She got it in a couple of games, she went out and put up 30 and 30."

Backes has made more than 300 career 3-pointers, and she's shot better than 40 percent behind the arc for her career. That's a wow.

"She's heck of a shooter," Culpepper said. "Since her freshman year, everybody on the court knew she was going to shoot a 3, she's always had the attention. So to shoot 40 percent for her career is impressive.

"And as she's gotten older, she's developed the strength to be able to take it to the rim and finish. She understands the game, she can do it all."

Backes is averaging team-highs of 23.4 points a game, 4.3 assists, and 3.2 steals. The only major category she doesn't lead is rebounds, an that honor goes to 5-10 freshman Briar Cox.

Cox had seen limited varsity minutes until she exploded onto the scene in a Jan. 29 against Stover.

"We were having a tough time rebounding the ball," Culpepper said, "and she came in and got 15 rebounds in 12 minutes. I'm not extremely smart, but if a girl plays 12 minutes and gets 15 rebounds, she probably ought to play more."

Since that game, she's averaging a double-double, 11 points and 12 rebounds.

Cox isn't the only freshman making an impact, as the 5-6 Myra Class is Part 2 of Tipton's potent 1-2 scoring punch. She's averaging 15 a game and is another 3-point sharpshooter --- she's made 70 of them, giving the Backes-Claas duo a whopping 158 shots made beyond the arc.

"She's another one of those kids who works on her craft, a lot," Culpepper said. "She's a pure scorer, she's really quick, and she's good about taking the ball to the basket and scoring. She's really, really well-rounded on the offensive end."

This week has been surreal for all us, so playing and watching some basketball will be a welcome sight.

"We want to make sure we enjoy it while we can."