JEFFERSON CITY, Mo. --- By 7 p.m. Thursday, it had already been a good night for Helias.

It was a district double play, a sweep of sweetness for the Blue and Gold ... but a bitter basketball night for Boonville.

And in both, the second quarter was the difference.

After the Lady Crusaders dumped the Lady Pirates 58-49 in the Class 4 District 10 championship game, the boys made sure they had dates for their sectional trip to Rolla --- they disposed of the Pirates 70-63 at Capital City High School.

The difference for the No. 3 Lady Crusaders (15-12) actually started midway through the first quarter. After the top-seeded Lady Pirates (22-4) jumped out to a 12-4 lead in the opening minutes, Helias coach Alan Lepper jumped up and called timeout.

"All I said to them was: 'Hey, we knew there were going to be ebbs and flows in this ball game,'" Lepper said. "'Let's go out and do what we need to do.'"

Some timeout talks are better than others.

The 3-2 Helias zone defense promptly throttled Boonville's offense ---the Lady Pirates were a frigid 2-for-17 from the field the rest of the half, 1-of-12 in the second quarter.

Was this good defense or bad offense?

Yes. But the Lady Pirates had few good looks.

"We just put that (3-2 zone) in this week," the third-year Helias coach said, "We wanted to throw something at them that was different than what they'd seen before."

That would be the game's only lead change, as Helias would lead the rest of the way.

The Lady Crusaders --- who led 21-16 at the break and 42-33 after three --- don't have an overwhelming record, to be sure. But they've grown into somewhat of a giant killer with wins over Strafford (No. 2, Class 3), Southern Boone (No. 6, Class 3) --- teams that will meet in the state quarterfinals Saturday --- and a quality Boonville team, which was seeded two spots higher than Helias.

"When we play the really good teams," Helias junior Kylie Bernskoetter said "it makes us all play together even better."

Lindsey Byers led the winners with 19 points and Bernskoetter added 18, as she continues her devastating scoring surge --- now 82 points in three games.

"Lindsey is our best scorer,"Lepper said, "but when Kylie gets open, she's going to drain it. She's been great for us."

And how great this feels.

"This is amazing," Bernskoetter said after Helias captured the program's first district crown since 2016. "It's a feeling we've never felt before."

If you wonder if Lepper was happy about the outcome, well ...

"We had a chance to get here, we got here, and we won it!" he exclaimed. "We battled all year long for this moment, we're district champions.

"Thank God," he continued with a smile that stretches all the way to Rolla, "let's go!"

While the girls won the second quarter --- and the game --- with their defense, the Helias boys did it with their offense.

How does 31 points in eight minutes sound?

"We played with the intensity in the second quarter that we wanted to play with the entire game," Helias coach Joe Rothweiler said. 'And we played looser ... I thought we played tight, at times, tonight."

It's a good thing the Crusaders were great in the second quarter, because they were outscored 47-39 in the other three frames.

They outscored the Pirates 31-15, to turn a four-point deficit into 12-point lead, 44-32. Helias finished the half with a 16-4 flurry that was capped on a 3-pointer freshman Desmond White at the buzzer.

But it didn't last, as Boonville used a 19-9 scoring edge to get within 53-51 after three. And the Pirates were still within 64-62 when Tyson Franklin hit a 3-pointer with 50 seconds left.

"We knew they weren't going to go away, their kids are too tough to go away," Rothweiler said.

That, however, would be that. The Crusaders made 6-of-8 from the free throw line down the stretch to finish it with a 6-1 run.

"That didn't happen a lot early in the season, but it's happened three or four times lately," the second-year Helias coach said.

Next up: A caravan of Blue and Gold headed to Rolla.

"It's awesome," Rothweiler said, "With both teams going, we should have a pretty big crowd down there Tuesday night."

Helias enjoys district sweep
as both teams move to sectinals 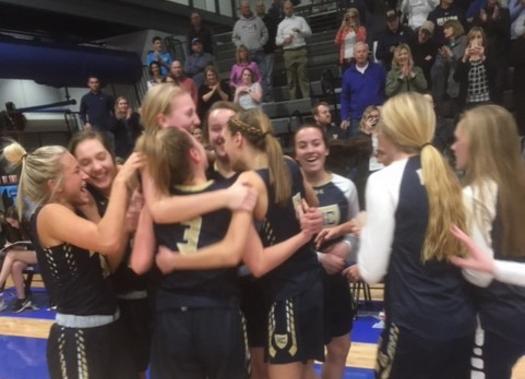