must start with the administration

Ron Cole was a stalwart of the Jefferson City Jays football program for nearly four decades. Now retired, Cole, 70, shares his candid thoughts on the Jays past, present and future in this three-part series.

Part One of a three-part series

IT WAS THE FALL OF 2001. It was late on a Friday night and Ron Cole was sitting at his desk in the locker room at Adkins Stadium. He looked tired, beaten. Our postgame conversation wasn't a pleasant one for him, it was strained, almost painful to hear and see.

It was a night that, in football terms, saw two ships passing in the night.

This was a game that pitted the two preeminent high school programs in the state, and Webb City had beaten Jefferson City.

This was the passing of the torch.

Under the direction of Pete Adkins, Jefferson City had boasted the best football program in Missouri for four decades --- from a 71-game winning streak in the 1960s, to nine state championships in a 19-year span from 1976-94. State championship No. 10 came in 1997, with Cole at the helm.

The Jays were only four removed years from their most recent title. But now, the wait is at 19 years and counting.

Webb City had already been very good entering the 2001 season, winning four state titles of its own the previous 13 seasons. But the meteoric rise to dominance, stamping itself as the Best Program in Missouri, was still to come.

The Cardinals won the state championship that year, and they would win eight in the next 14 years including five straight from 2010-2014. And if not for a fumble at the goal line at the end of last year's Class 4 State Championship game, the streak would be six ... and counting.

"I wasn't feeling very good after that Webb City game," Cole said. "Of course, I was mad about getting beat, I don't like to get beat.

"The very next morning, I was chasing a calf around that wasn't in the right place and that's when it hit me. My blood pressure was out of sight. I can't remember what it was, but it was way up there --- Dr. (Michael) Steenbergen couldn't believe it was that high and I was still walking. I guess I'd had a mini-stroke of some kind."

Cole went numb, but he soon regained sensation. Thankfully, there have been no serious lingering after-effects.

"It was all job-related," Cole said. "I've got sympathy for anybody who's the head coach at Jeff City, but the worst thing you could do is try and replace Pete. But he wanted me to do it and so I did, because he knew I'd fight for the program. But nobody follows Pete Adkins ... look how long it took Alabama to recover after Bear Bryant retired.

Cole, now 70, retired for the first time at the end of that season, his seventh as head coach of the Jays. And not just because of what was happening on the field.

"It was enough of a fight trying to win football games without having to fight everybody who was trying to tear the program down," he said. "Everybody thought I was paranoid, but they all found out that I wasn't.

"There are enemies of football out there, but it's still the highest profile sport we've got and it needs to be successful. It sets the tone for the other sports. I was fighting things with the high school administration, fighting for the program ... everybody was trying to destroy it."

Like many things in life, a big part of this fight was about money.

"At that point in time --- what coach Adkins had and what he'd left me --- was that we funded everything out of season tickets and gate receipts and fundraisers," Cole said. "We fed the kids, we equipped the kids, we paid for all the travel ... there was no tax payer money for football except for coaches' salaries. People didn't realize that we paid for everything, the referees, the ambulances ... everything."

In other words, the program was self-sustaining.

"It went back to the kids, we really treated the kids well, we treated them first class ... we paid them back for all their hard work. It was the best program in the state of Missouri, not only on the field, but in the way we equipped them and traveled and treated our kids."

Indeed. When the Jays went on the road, they did it in style. And when they arrived with their hundreds --- if not thousands --- of fans, you knew it.

"Football had some enemies out there who didn't like it because we were successful and we had this large bank account. But we spent it all almost every year."

Superintendent Chris Straub was the program's knight in shining armor.

"Luckily," Cole said, "we had a real good superintendent and he didn't allow any of it to go on. I should have let him handle more of it in the first place, instead of trying to fight the battles myself.

"But it changed when Straub retired (in 2002), it started going the other way. Somehow, the administration decided that having a good, solid athletic program wasn't all that important. That went away, they tore it down, the morale of the school was gone."

Cole returned as defensive coordinator to assist Ted LePage in 2011, before retiring after the 2015 season --- "This time, for good," he said.

A lot changed while he was away.

"As long as you had a winning season, that's all that mattered."

Before coming to Jefferson City in 1975, Cole had been head coach at Cassville and Iberia. Yes, at one time, Iberia had a football program.

"When I won three balls games down in Iberia,"he said, "I could have been elected mayor, because they'd never won a game. So their standards weren't very high at the time.

"The parents we have now have never been a part of winning a district championship or winning a state championship. They'll tell you at the end of the year that we went 9-1, that's good, the parents think it's okay because that's the standard right now.

"I really believe our new superintendent (Larry Linthacum) and this new principal (Robert James) are going to do everything they can to get it back. They're telling the teachers now to wear Red and Black on game day, not other school's colors. Things like that are important.

"Pride in the program, that pride has got to come back to be successful. It all starts with the administration.

James, a native of Central Missouri, had been a high school principal in Temple, Texas.

"Football's pretty important in Texas and I think he realizes that," Cole said. "So I think we have the guys in place now who can help change things. Of course, they have many more problems to deal with than just athletics."

THESE DAYS, COLE IS TENDING TO his 1,000 acres of farmland and about 100 head of Angus cattle. Football? He didn't even realize practice had started.

"I'm enjoying retirement, I guess, but I'm busier than you-know-what. I can't get caught up on anything work-wise on the farm, you've got something new every day."

"After that one bout I had there with whatever I had --- a mini-stroke or high blood pressure or stress or all of those things combined --- I'm still not sure what it was, but I feel good now."

PART TWO: The Adkins years ... and would his coaching style still work today?

PART THREE: The LePage years and the future of the program. 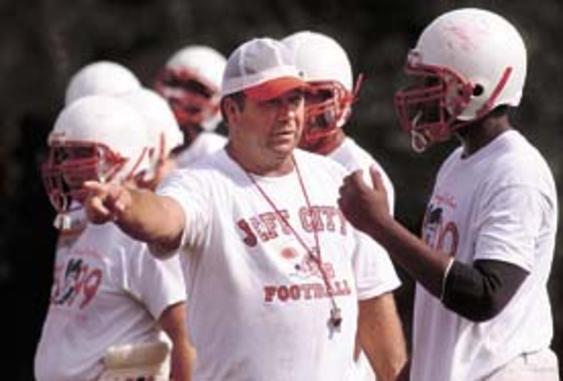 A football life:
Cole's thoughts
on the Jays past,
present and future