JEFFERSON CITY, Mo. --- Last Monday was the first day of football practice, as well as the first official practice for all other high school sports this fall.

The first day of almost anything is special. Hope is renewed, and dreams, aspirations and players' legs are all fresh.

Especially in this case, because it's even more special --- the first first day. As in the first ever.

Ever is a long time.

But the journey for the first-year Capital City Cavaliers is underway.

"Our staff and players are extremely excited about getting started and moving forward into the season," said Shannon Jolley, the first head coach in school history. "The amount of work involved and the things involved with starting something from scratch, it's been monumental.

"It was a little overwhelming, at times, but we've also had a lot of support and the structure is set up for us to be successful. But finally getting started was like a breath of fresh air, because now we're in football season."

The Cavs won't have a varsity team this first season, but they'll have a combined 14 to 16 games --- "We're still working on the schedule." --- between their junior varsity (which will play eight games), and the freshmen and sophomore teams.

To say the least, Jolley couldn't be happier with his squad of 45 players and what he's seen to this point.

"I don't think kids really enjoy working out in 100-degree weather, (the first day of practice was a humid, miserable day with a high of 95)," he said. "But it's delayed gratification --- the games and Jamborees are definitely the light at the end of the tunnel.

Jolley didn't want to single-out any players who have the potential to be stars, not just yet.

"We've got some talented players; we've got a few players who stand out right now," he said. "Overall, I think our kids have demonstrated the ability to be extremely competitive."

Jolley was an assistant coach under Terry Walker at JCHS last year. That was Jolley's second one-year stint as an assistant with the Jays, with the first coming in 2006 with Ted Lepage.

Jolley has been a head coach at three stops --- 10 years at Eldon, three at Nevada, and five at the School of the Osage.

A fairly impressive resume'. So why take on this challenge, why now?

"After being away for a year (as a head coach)," said Jolley, 48, "it just seemed natural to show interest in this position. I think it's a perfect fit for me and my family. One thing I really enjoy is not only developing players, but helping develop coaches. Being part of the leadership of a staff is something I've really enjoyed.

"It's been an awarding transition to this point,  for sure."

The schedule is "a grab bag right now," said Jolley, whose team opens the season Sept. 3 at South Callaway after playing in a JV Jamboree on Friday night in Rolla.

"We're going to play everybody from Jeff City to Helias to Owensville to Union."

The Cavs' home opener --- those games will be played at Adkins Stadium --- will be Sept. 9, a freshman game against Owensville at 5 p.m. and a JV game against Hickman at 7 p.m. The rest of the schedule is mostly complete, but still not set in stone.

While building one new high school, there have also been massive renovations at Jefferson City High School. The cost for these two projects is a bit staggering --- an estimated $141.5 million.

But it was worth it ... and much needed.

"It's beautiful," Jolley said of his new home. "It's coming together, they're just putting the finishing touches on it."

Those finishing touches include the weight room and the turf field, which will some day be the center piece of a new stadium for the Royal Blue and Silver Cavaliers. That looks to be many years down the road, but the practice field at the high school should be ready for the first day of school, Aug. 27.

It's been quite the dash to the finish line.

"A lot of people have done a lot of things to make our summer successful," Jolley said.

Expectations have to be low for this maiden voyage, right? Well, maybe not too low.

"We expect to be extremely competitive and give ourselves a chance to win every contest we're in," Jolley said. "It's going to be an exciting season, that's for sure."

"We're definitely going to be at a disadvantage for a while, especially next year when we roll right into our varsity schedule," Jolley said. "Patience is going be a key for everybody, but I think at the end of the day, we're going to put a product on the field that's pretty impressive."

Off the field, too.
"I want to make sure," Jolley said, "that these kids represent Jeff City and our school the right way. We stress that a lot." 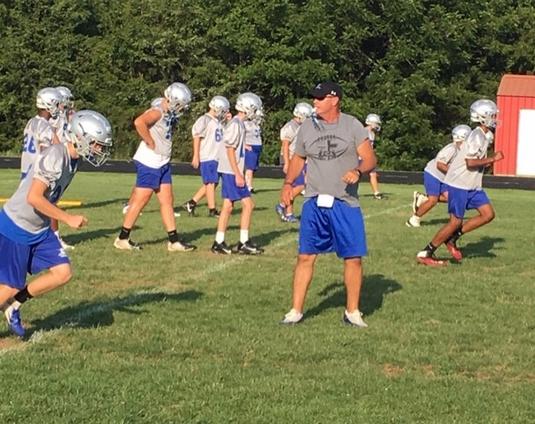 At last: Cavaliers eager to get
started on initial football journey

Jays adjusting to
Walker in his second
season as head coach