Golf is sports' version of she loves me, she loves me not. More often than not, it's the latter.

But for Walker Kesterson, the game really loved him this weekend and rest assured, he loved her back.

Facing a likely end to his great run at the 112th Missouri State Amateur, Kesterson made an improbable 50-foot chip shot on the 18th hole of the championship match Sunday to edge two-time defending champion Brad Nurski 1-up and win Missouri's most coveted golf title at Hickory Hills Country Club.

"This is pretty incredible, it's amazing," said Kesterson, a 2016 graduate of Southern Boone. "I've had a lot of chipping woes, that's definitely been my Achilles' heel. So to chip in, it's kind of poetic justice to see all that (work) pay off.

"You get lucky sometimes and that was a good time to get lucky."

Maybe unlikely, but not lucky.

Kesterson was a four-time All-State performer for the Eagles, and he's preparing for his senior year at Southern Miss. He led those Eagles --- the Golden Eagles, actually --- in scoring this spring with a 73.3 average.

This was his third appearance in the State Am, which started with 160 players last week. After 36 holes of stroke play, the field was trimmed to 64 for match play.

Kesterson has advanced to match play all three times, but his other quests ended with losses in the Round of 32.

He wasn't even sure, however, that he'd even qualify for match play.

"I didn't start out very well in the second round (6-over after seven holes)," Kesterson said, "so I was kind of behind the 8-ball. But I ended up making birdie on 8 and then shooting 4-under 32 on the back to get me in."

That surge earned him the 15th seed at the 7,134-yard, par-72 layout. And his surge continued in match play --- through his first five matches, he only trailed for one hole.

One hole. Total. And that covered a span of 82 holes.

He won the first hole in four of his first five matches, and was 2-up after five in every match leading up to the finals.

And there was this ---- for Kesterman and his normal game, he was being great in reverse.

"I lost my driver throughout the week, it was the weirdest thing," he said. "Because through college golf and everything, the one club I can normally count on is the driver. But for whatever reason, I was just spraying it --- not far enough to get me in trouble, but far enough to be in the rough every time. It frustrated me.

"But I putted great most of the week. That's so unlike me, to hit the driver bad and putt well."

Nurski, as usual, was doing everything well heading into Sunday. He produced a dazzling 64 in the first round of stroke play and followed that up with a 71 to win medalist honors by five shots.

He certainly came into the championship match with history on his side --- plenty of it. He was seeking his third straight Amateur title, which would have been a first in the 112-year history of the event.

Nurski was also trying to win his fourth title overall, becoming just the fourth player to achieve that feat. One of those three? A guy named Tom Watson.

Due to inclement weather, the championship match was shortened from 36 holes to 18, and didn't get underway until 2 p.m. instead of 9 a.m. You got no complaints from either player, because this week is always a grind --- Kesterson had already played 118 holes before Sunday's finale.

As he stood on the first tee, he felt something he hadn't felt in a long time. Really, big butterflies.

"That was the first time I really felt nerves on the golf course since my early days in high school," he said. "It was a new animal for me.

"Some of the shots I got lucky enough to hit to down the stretch, I don't know what happened, but something happened that worked out. Something was in the cards this week."

While match play is hole-by-hole and no total score kept, Kesterson estimated he was 10-under in his first five matches. Kesterson basically led wire-to-wire in all of them, but wasn't so fortunate against Nurski.

Nurski won the first hole and didn't trail until --- get this --- the final hole.

"Having to play from behind all day," Kesterson said, "is a lot more stressful than being in control."

Nurski birdied the par-4 fifth hole to go 2-up, and Kesterson knew he couldn't drop into a deeper hole.

"To be 3-down," he said, "you're really behind the 8-ball. I missed a couple of putts early that I really thought I'd made, but I slowly plugged away and got back to even on 13."

Kesterson had a good chance to take the lead on 15, but his 8-foot birdie try slid by the edge. Nurski then won 16 to regain a 1-up lead with only two holes  left.

"That," Kesterson said, "is never a place you want to be."

Nurski basically gifted Kesterson the 17th --- "He kind of gave me that hole." --- leaving the match even heading to 18.

Both players hit good drives on on the 422-yard par 4. Nurski was out. He hit his approach to 15 feet, before Kesterson hit his 52-degree wedge over the green from 125 yards.

She loves me not.

"(Nurski) walked up to the green thinking that at the absolute worst," Kesterson said, "he was going to one tee (to start the playoff).

"I was just hoping I could get it up and down and force extra holes."

Kesterson faced the 50-foot chip from a downhill, "touchy" lie. This would be a shot he'd never forget, right? Well ...

"I still don't remember hitting the chip," he said with his engaging smile. "I certainly wasn't thinking about making it, inside four feet would have been a helluva shot."

He certainly hit one

"When it was about six feet from the hole, it was tracking," he said.

"Everything you've been thinking about," Kesterson said, "everything the tournament has built up to, and all the big winners in the past --- you've got Tom Watson and Payne Stewart on this trophy --- it all kind of sets in that you have a chance."

It was tracking .... then the ball curled in the left side of the hole for a birdie. The swinging pendulum of momentum had to punch the champ in the gut.

"I'd say shock is the best word to use," Kesterson said.

"Sometimes, crazy things happen in golf when you wouldn't expect it," he continued."It's weird how fast things can flip.

"It was one of those weeks where everything seemed to click. It clicked at right time."

Nurski still had a good shot of sending the match to a playoff, but his putt wasn't really close, drifting left of the hole by 3-4 inches.

Kesterson is proud of this feat, as he should be --- he plans on displaying the trophy at Eagle Flight Fireworks in Ashland for the duration of the fireworks season.

"It's good to bring something back to the center of the state," he said.

"All those times when you're by yourself on the putting green growing up, imagining you have this putt to win the big tournament ... you were doing that all the time," Kesterson said. "You never imagine it can actually happen and when it does ..."

You gotta love it.

Walker Kesterson, a 2016 graduate of Southern Boone, is all smiles after winning the 112th Missouri State Amateur on Sunday in Springfield. 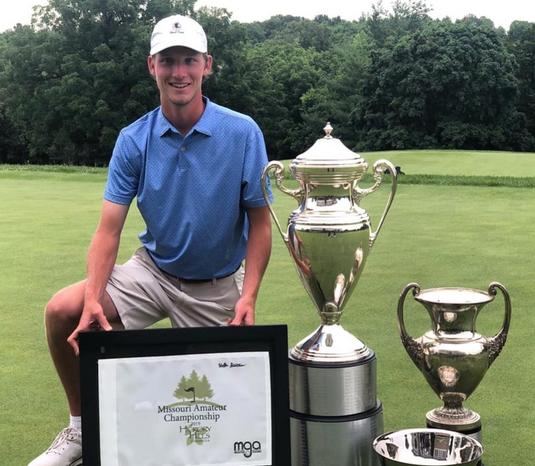