Emotional week has smiley-face
finish thanks to Roberson, Jays

COLUMBIA, Mo. --- There really is no place like home.

The Jefferson City track and field teams weren't home Saturday, but home was never more on their hearts, on their minds, and in their blood, sweat and tears than it was on this day.

The Class 3-5 State Track and Field Championships were displaced from Adkins Stadium this weekend due to Wednesday night's jolting and devastating tornado. The stadium was just one of numerous structural victims, with most of this damage being sustained by the press box that had it's roof blown off..

But by the Grace of God, buildings and trees were the only victims of this massive F-3 tornado.

Now, the games go on, which gave a lot of folks a brief a reprieve to what's happened here. These games involved running, jumping and throwing things, like shot puts, javelins and the discus.

And now nobody --- not on this day, not in the history of Missouri track and field --- has thrown a discus farther Jays senior Devin Roberson.

Roberson --- who's headed to Mizzou on a track scholarship, and he showed once again why --- shattered the overall discus state record by six feet with his throw of 218 feet, four inches to lead the Jays to a fourth-place finish in the Class 5 championships.

And he did it on his final throw as a Jay.

"I had just thrown 213, that was a huge PR (personal record) for me," said Roberson, who's only 17. "And this was going to be the last discus throw of my high school career, so I was thinking to myself: 'I know I have a big throw in me.'

"So I started to clap, that's the first time I've ever done that. I didn't want to leave with any regrets."

And the fans joined in.

"I got in the ring and they started clapping faster and faster, and I got even more pumped up," Roberson said. "I got through it very smooth and it felt like it just jumped out of my hand. It was flying flat through the air, I knew it was a really good throw --- I knew immediately it was a huge PR.

He launched it like a Tiger Woods' drive, long, high and majestic.

"He knew it as soon as it left his hand.," Jefferson City coach Melvin Myers said. "He got excited and spun around and he fell down in the process. It was something special to watch."

This meant a lot more to Roberson than winning a second straight gold medal.

"It's awesome.  We were kind of outmanned by some teams, because we didn't have as many kids. So to come out with a fourth-place plaque and to bring it home after this week, it's something special."

"We talked about it," Myers said, "that we're not just representing ourselves, we're representing what's on our chests and where we come from. They really stepped up, We always talked about holding the rope, when someone else falls down, you pick up the rope and hold it.

"That's what we tried to do for the community."

The Roberson family was personally touched by the tornado. While Devin was at a friend's house when it hit, his mom was at their home off Tanner Bridge Road, which was right in the tornado's path.

"I checked on her as soon as it was done," Roberson said. "Coming home, coming down the street, I saw the damage to all the houses, trees falling, power line poles snapped in half .... it was crazy."

The Roberson home suffered minor damage to the roof, while several big trees were uprooted in the backyard.

"We've been hauling limbs into a big pile and the night it hit," Devin said, "I was helping people around my house ... any way I could help."

Despite it all, it didn't stop Roberson from making state history.

"Being an athlete over the years," he said, "my mind kind of switches and I get ready for the meet."

Roberson also finished second in the shot put ---  "I'm not disappointed with my throw." --- to account for 18 of the team's 44 points, while senior thrower Corey Suttle finished third in both the discus and shot to add 12 more.

But as great as those effort were, they still needed help from others to bring home a trophy for the first time since 2005.

And they got it.

"Some people were a surprise, they lived above where they were supposed to be," Myers said.

Brendan Rozier was seeded ninth in the javelin, but finished fourth with a throw of 171-11; Andrew Dyer was unseeded in the 110=meter hurdles, but he was fourth in 14.74 --- a full half-second faster than his sectional time; and the 4x800-meter relay team of senior Thomas Nield, juniors Deaken Walker and Ben Krause, and sophomore Andrew Nield was fifth in a school-record 7:53.

That's more than 17 seconds faster than their time at last week's sectional meet. And when the margin between winning a trophy and not, well ...

"Everybody," Roberson said, "left it all out on the line."

This was the first time in 42 years the championships weren't held in Jefferson City. And while the storm was a nuisance for the Missouri State High School Athletic Association, nobody was complaining.

Along with Class 5 being held at Battle, Class 4 was moved to Washington, and Class 3 was held at the Audrey J. Walton Track and Field facility on the MU campus.

"That it was a very hectic week, a lot of eventful things happened, good and bad," he said. "The bad just outweighed the good, by a lot.

"But for us to still have the mindset to go out and compete well, it just shows the integrity of our team and how much love we have for our community."

Jefferson City, our home and our future are in good hands. 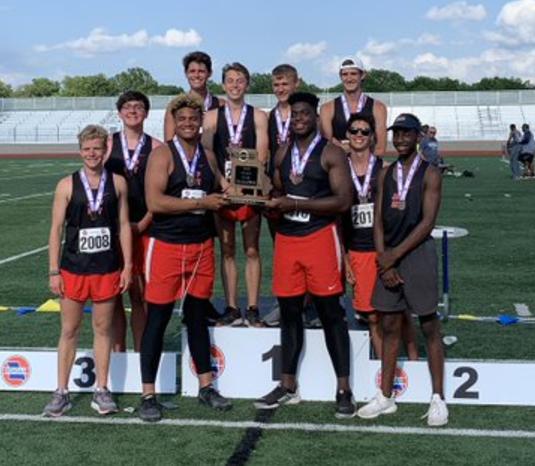 The Jefferson City Jays proudly show off their trophy after finishing fourth in the Class 5 State Track and Field Championships on Saturday at Battle High School in Columbia.