in seventh to shock Marshfield 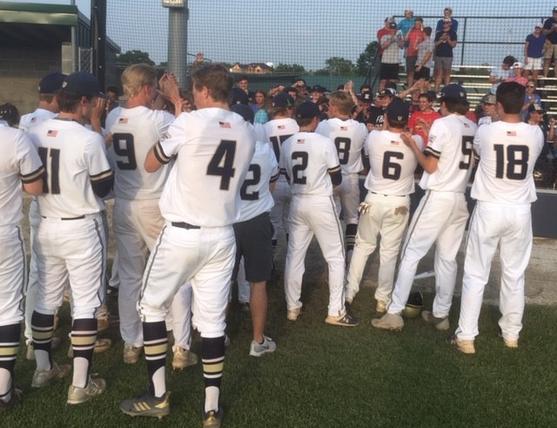 The Crusaders celebrate with Helias fans after stunning the Marshfield Blue Jays with five runs in the bottom of the seventh inning in their 7-6 Class 4 sectional win Wednesday at the Legion Complex.

JEFFERSON CITY, Mo. --- If the Helias Crusaders had lost this game, there would have been a lot of second-guessing this offseason.

It's what baseball fans do, second guess, they're experts.

Why didn't Zach Davidson start this game? The senior ace hadn't pitched in eight days, after all, after throwing a near no-hitter in the 6-0 district championship win over Boonville.

Well, Davidson didn't start, but he certainly had a hand in the finish --- without throwing a pitch.

It was a finish that was so unlikely. Improbable. Unbelievable. Inspiring. Take your pick ... or pick them all.

It was The Miracle on Ice on Dirt and Grass.

Down to their final three outs of the season, the Crusaders rallied for five runs in the bottom of the seventh inning to shock the Marshfield Blue Jays 7-6 in the Class 4 sectionals at the Legion Complex on Wednesday.

As it turns out, not starting Davidson was the right call --- they now have him ready for Thursday's quarterfinal game at Monett.

"Zach's our ace," Helias head coach Chris Wyrick said, "but we have confidence in all our guys to get people out. You play matchups and sometimes, you've got to roll the dice."

All 7's --- Wyrick was right all along, fans should have never doubted him. He's been a fixture of the Helias baseball program, first as a player, now as head coach for the past 20 years, so he actually knows what he's doing.

And this one, he said, was as good as it gets.

"This one's up at the top, one of the best (games I've ever been involved in)," Wyrick said. "I told the guys that this is the first time I've been speechless.

"This is just a special group, they don't quit, I love these guys. We've had some gut-checks this season in one- or two-run games, but not being down four in the last inning against their closer (Austin Dobrick), one of the best pitchers in the Springfield area.

"I'm just so proud of these guys, everybody, the fight they showed and the resiliency. They never give up.

"They refuse to lose."

Fifth-ranked Marshfield (15-7) was in control from the start to the almost-finish against second-ranked Helias (22-4). The Blue Jays scored three runs on two hits and a key error in the top of the first, and made it 4-0 with a run in the third.

"We hung a few pitches," Wyrick said, "and they hit them. They took advantage of every mistake we made."

The Crusaders scored single runs in the third (a foul-out sacrifice fly by Trevor Austin) and fourth (Griffin Buschjost's RBI-single --- and Buschjost wasn't done getting big hits) to get within 4-2. But the Blue Jays countered with single runs in the fifth and sixth to rebuild the four-run cushion at 6-2.

That's where it stood going to the bottom of the seventh.

"There was a little pessimism," Helias senior Zach Woehr said, "but I knew that we were going to come through. This is a group of special guys, I know they'll never let our coaches down or let their teammates down.

"So I believed in them every second."

That belief had to be a bit shaky, didn't it?

"You've got three outs," Wyrick said, "so you always have a chance until that third out, that 21st out, is recorded. I knew we had some work to do and we were going to need a little bit of help, and we were fortunate enough to get it."

The comeback started when the No. 9 hitter, Buschjost, singled sharply to center.

"That was big, that was awesome," Woehr said. "Griffin did a great job today."

One on, nobody out, and here came the potent top of the lineup for the Crusaders. That sounds a lot better than one out and the bases empty.

"Everybody in the lineup had to get it done, and that's exactly what happened."

Leadoff man Woehr, who had two doubles, walked and Zach Paschal singled to load the bases with nobody out. Austin's sacrifice fly made it 6-3 and Jacob Weaver's single cut the margin to two.

"I told the guys (heading to the bottom of the seventh) that if we get back down to Davidson and Wolken, we're going to win the game," Wyrick said.

Well ... Davidson then hit a shot to the shortstop to make it 6-5 on a play when the stumbling and bumbling Blue Jay made two errors on the play, further sparking the rally.

After Wolken walked, Michael Snyder laid down a perfect suicide squeeze bunt to tie it.

"Obviously," Wyrick said, "that was huge."

Up came Alex Loethen, who hit a sharp grounder to the second baseman. The throw came home, but Jason Hazelhorst, who was running for Davidson, beat the throw to end this wildly improbable affair.

And the folks went crazy.

"They pulled it off, they executed when they had to," Wyrick said. "Hopefully, we can keep it going because they're a fun group to be around.

"They never quit --- I'll go to battle with these guys any time."

James Schaefer pitched a scoreless seventh to get the win for the Crusaders, who left Wednesday evening to spend the night in Monett. They'll meet the seventh-ranked Cubs (19-6) --- who advanced with a 5-4 sectional win over Springfield Catholic --- at 5 p.m. Thursday.

"They're scrappy," Wyrick said of Monett, "they're a lot like these guys (Marshfield)."

But refusing to lose is even better.