ASHLAND, Mo. --- When the other team doesn't score, you have to like your chances to win the baseball game.

Well, the other team not scoring is nothing new for Helias.

It happened twice in 24 hours in the Class 4 District 9 Tournament, and it's happened in a staggering 40 percent of the Crusaders' games this season.

On this day, it was senior lefthander Zach Davidson who carved up the Boonville Pirates, leading the Crusaders to a 6-0 win to win and their fourth straight district championship Tuesday.

Davidson's effort came on the heels of Monday's 3-0 win over Marshall behind the shutout-duo of juniors James Schaefer and Kaleb Haley.

"Kelly (Fick) does a great job with these guys," Helias coach Chris Wyrick said, "preaching to them to fill up the strike zone and making the other team swing the bat. If you don't walk anybody and make them string together three or four hits, that makes it a lot harder to score.

"And you can't lose if they don't score."

And it's tough to score if you don't get a hit. Davidson, who walked four and struck out 12, had a no-hitter with two out in the seventh, when it was busted up on a two-strike single by Saylor Marquez.

This is only the second time in 26 games the Pirates were shut out this season, the other coming to a nationally-ranked team from Alabama in the season's fourth game.

But Boonville's strength is their potent 1-2 punch on the mound. The Crusaders beat them both this season --- senior righthander Connor Barnes on March 26, senior lefty Reece Lang on Tuesday

"That's really a feather in our cap," Wyrick said, "because both of those pitchers are really top-notch guys. And to beat their lefty in the championship game, that's something I'm really proud of."

While Davidson (6-1) was doing what he does, being very good, the second-ranked Crusaders (21-4) got to Lang with one run in the third, two in the fourth, and three in fifth.

The Pirates (17-9) --- who finished third in state last year --- helped the cause in the third. Center fielder Peyton Keeran misplayed Zach Wolken's fly ball into a wind-blown double, before Wolken moved to third on an error.

Wolken then scored on a squeeze bunt by Alex Loethen, and the Crusaders had gotten that all-important first run.

"When we pushed across that first run," Wyrick said, "I think that took the air out of them a little bit, because I don't think they thought we were going to score off this guy, because he's that good.

"But once we got that first run, I think we relaxed and just went up there hacking after that. And it's always easier to play from ahead, in any sport."

The Crusaders took the lead with small ball ... they supplied the knockout blow(s) by playing long ball.

Leading off the fourth, Trevor Austin smashed a line-drive homer over the 375 mark in left center to make it 2-0, his second home run in as many days.

"He's got his timing down right now," Wyrick said. "He's a good one .... whenever he's locked in and stays short to the ball, he's got some pop."

Jacob Weaver --- who would play both small ball and long ball Tuesday --- laid down a bunt single after Austin's shot, and he would later score on Wolken's two-out single.

In the fifth, Zach Paschel belted a solo home run, before Weaver's two-run bomb made it 6-0 to finish the scoring and in all essence, the game

At what point, and with what lead, did Davidson feel comfortable?

"After we started hitting home runs," he said with a big that stretched from Ashland to Jefferson City.

"I used to like hitting them over the fence," Wyrick said. "But they're both equally important, especially off a guy like this."

Davidson reached the pitch limit after Marquez's single and Haley came on to get the final out for Helias, which banged out 10 hits against Lang, who walked one and fanned eight.

While Tuesday's result was the best news for Helias, Monday night's news wasn't bad, either. Top-ranked and two-time defending state champion Aurora --- which ended Helias' season the last three years --- was knocked out by Hollister in the District 14 semifinals.

"I only got about 40 texts about that last night," said Wyrick, whose team will host fifth-ranked Marshfield (15-6) in the sectionals next Tuesday. "But in response, I told everybody we still had to beat Boonville, we still have to take care of our business."

Okay, sure. But having said that, let's just say the result didn't break Wyrick's heart.

"No, it didn't," he said, "because they broke my heart the last three years."​ 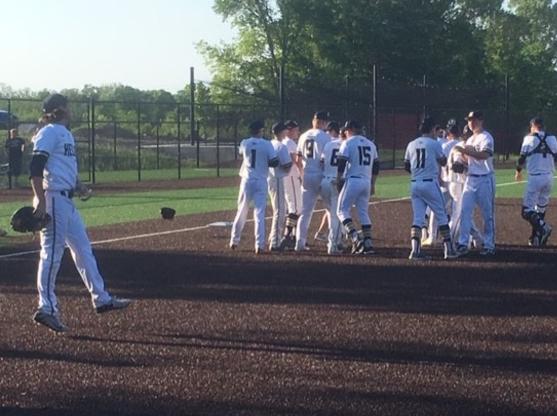 Helias junior Peyton Huddleston jumps for joy before joining his teammates in celebration after the Crusaders beat the Boonville Pirates 6-0 to win the Class 4  District 9 championship Tuesday in Ashland.

Roberson's amazing
career as Jays' thrower
is drawing to a close