ASHLAND, Mo. --- When Brian Ash came to Southern Boone, he knew of Sam Stichnote, but that's about it.

This guy, Ash had heard, was pretty good.

Now, he knows the Southern Boone senior and Ash's opinion has changed.

"He's the All-American boy, he's like the kid from Mayberry," said Ash, in his first year as Eagles head baseball coach after leading the Jefferson City Jays the past nine years. "He comes from a good family and besides that, he's the ultimate competitor."

Don't confuse Stichnote with Opie Taylor, because the things Sam can do are things no Opie from Mayberry could ever do.

When a play has to be made, he makes it.

"If there's any exception to the Southern Boone Hall of Fame," Ash said, "he should probably go in tomorrow. That's how much he's meant to the school and the community, he's just one of those once-in-20-years type of guys.

"The good grades, his attitude, he's so smart, he's so coachable, and the leadership ... he's everything you'd want. He's like having another coach on the field.

"Plus, he's probably one of the hardest-working kids I've ever had."

But sadly for Southern Boone fans, Stichnote is a senior. If only you could say these words and make them come true ...

IT'S BEEN A FAIRLY SEAMLESS TRANSITION for Ash, moving his coaching talents from the Jays to the Eagles.

Which is not to say it was easy.

"It was difficult, because I love everything about Jeff City," Ash said. "I wouldn't trade my time there for anything else. I put a lot of time and effort into that program, but maybe it was time to get a little new life and energy into it.

"Sometimes on your career path, you've got to figure out what's best not only for yourself, but your family (wife April, son Nolan), in particular my little boy. Having family in the area, we just felt like it was the right time.

"If we were ever going to do it, this was the right time."

Ash is a distinguished baseball coach with a distinguished record, 335-135, a sharp winning percentage of 71 percent. During his time with the Jays and Blair Oaks Falcons (five years), he won three state championships (Blair Oaks 2005-06, the Jays 2017), with the latter ending a state title drought of 28 years for the Jays.

Now, Ash is trying to be a drought-buster once again --- the Eagles haven't won a district title since 2003.

He's already got a great fan base to help the cause.

"I know a lot of the families, a lot of them are related to my wife," Ash said. "But coming from a bigger school, I think the kids were excited, but there might have been a little bit of intimidation factor, too. But in a good way --- they wanted to do everything perfect and everything right.

"They keep grinding and keep getting better, and I think we're a pretty dangerous team now. It's worked out great."

Ash says he still he keeps an eye on the Jays to see how they're doing, because he wasn't just their baseball coach, he built relationships and still maintains contact with several of his former players.

But life moves on.

"Like any other transition you have --- and this senior group, I'm their third head coach --- they've had different philosophies and maybe different theories, you just try not to overwhelm them," Ash said. "But I think it was still overwhelming for some.

"They were really receptive, but I think it took a while for them to get the feel of what we're trying to accomplish. And baseball is such a feel game."

The Eagles certainly seemed to have captured that feeling.

The top-seeded Helias Crusaders (17-3) have drawn a first-round bye, and will play in the semifinals against either Marshall or Centralia at 5 p.m. Monday.

AS GREAT AS STICHNOTE IS AND HAS BEEN, he doesn't pitch for the Eagles, he solely plays shortstop. And if you weren't sure where the baseball conversation always starts, these three words should help ---

"That's always the case, isn't it?" Ash said. "It's pitching and defense. I knew the M-O on this team is that offensively, they can struggle. They had a pretty good year last year, but sometimes scoring runs was a struggle.

"With all the guys we have returning from last year, I think we're a little bit better. But pitching and defense is still what's keeping us in games."

The good news for the Eagles is they have some good arms. The worst news for everyone else in the area is that three of them are sophomores.

It starts with sophomore lefthander Ethan Osborne, who's 6-1 with a 1.13 ERA.

"And he's a bulldog, he's a competitor, he likes to win."

"He keeps the ball down in the strike zone, that's the No. 1 thing for him," Ash said.

Nick Post, a sophomore righthander, has emerged as a late-season force "with good velocity" after coming back from injury.

And he's the poster child for another one of this team's strengths--- speed. Stichnote has stolen 29 bases, which is just three shy of the single-season school record.

"We have a lot of team speed, offensively, so we'll put a lot of pressure on teams," Ash said. "We'll bunt, we'll run ... we'll do anything we can to get that run across."

Senior DH Parker Boyce ---"He's smart, intelligent, he understands the game." --- is batting .387 with 27 hits, 20 RBI, 20 runs scored and 16 stolen bases. And here's the kicker about Boyce, pardon the pun --- the three-time All-State kicker will take his football talents to Missouri S&T this fall.

Senior catcher Keegan Maynard "Hits absolute rockets, but right at guys. He's kind of that tough-luck hitter." But it doesn't phase him, because "He's probably our defensive MVP," Ash said.

"He's keeping guys from stealing because he has a strong, accurate arm, and he's blocking everything and keeping wild pitches from going to the screen."

Another player worth noting is speedy freshman left fielder Carter Karotka (.375). He's batted leadoff the last 18 games, while boasting a .375 average and on-base percentage of .517 with 22 stolen bases, and he's only struck out five times.

Also, Karotka made the baseball play of the year in Central Missouri with a diving catch toward the line in a recent game against Fulton.

"I've not had a better outfielder at this age, anywhere," Ash said. "His instincts are ridiculous."

Likewise, so is the intelligence level of this baseball team --- a varsity GPA of 3.7.

"Not only are they smart," Ash said, "they're good kids, they come from good families ... and they're pretty good baseball players, too."

It might not be enough to get out of this district, though, as it's littered with talent.

Helias is the No. 1 seed, "... so they're obviously the favorites," said Ash, who's had his share of battles with the Crusaders through the years. "But after that, it's pretty wide open.

"I think the top five seeds have legitimate shots at winning it."

No surprise. After all, it's time for May's version of March Madness.

Brian Ash (right), former baseball coach of the Jefferson City Jays and Blair Oaks Falcons, has directed Southern Boone to a 17-7 mark in his first year with the Eagles heading into the Class 4 District 9 Tournament in Ashland.

Behind Ash, Stichnote So. Boone
looking to end district drought 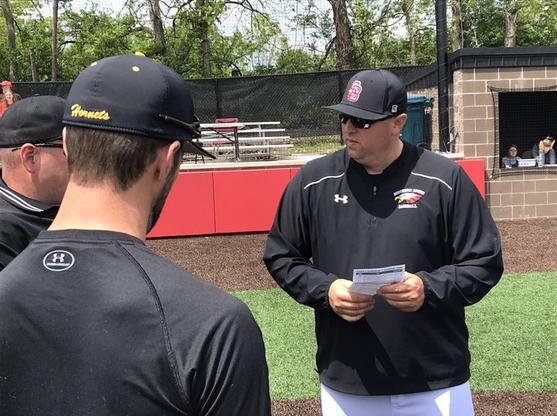