chasing his dreams, not Pokeman 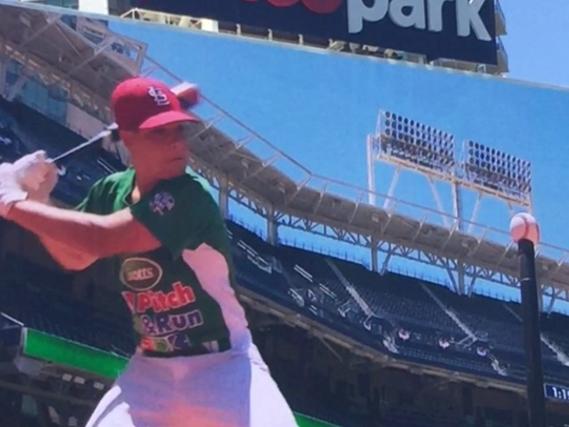 SAN DIEGO --- Some kid's summers are better than others. And more interesting. And fulfilling.

There are actually better things to do than sleep 12 hours and chase Pokeman the other 12, while still managing to text the entire 24.

All the way to San Diego.

All the way to the Stars.

The Fulton 12 year-old spent a dream week at the All-Star Game in San Diego last week, partly to compete in the the National Pitch, Hit and Run Finals, but mostly just to soak it all in.

"It was really a great trip" he said. "They did everything they said they would do; it was pretty much what I expected it would be.

Foster had won the regional Pitch, Hit and Run competition the past four years at Busch Stadium. But this year, he also earned the invitation to compete in the national finals that were held Monday afternoon at Petco Park, home Padres.

"I wasn't really nervous, just from being at Busch Stadium four times and being used to the pressure," he said. "I didn't think about it and just did my best."

It ended up producing an overall third-place finish in the nation in the 11-12 year-old age group.

Let's see Pokeman do that.

"We were all pretty much equal," Foster said. "The competition was a lot of fun, getting to hang out with all my competitors and meeting a bunch of new people.

Monday evening, Foster and the other 23 PHR competitors took turns shagging the balls that didn't fly into the upper deck during the Home Run Derby, watching in awe as the game's best hit baseballs a very long way.

"It's pretty crazy," Foster said. "You dream of doing that, then these guys make it look easy. I've been to a few Cardinal games, but you don't get to see that many home runs. But there's a bunch of home runs in the Home Run Derby, that was cool to see."

Shagging balls in this deal is baseball's version of a mosh pit. Foster is big enough to push other kids out of the way, but he's nice enough not to.

Perhaps he should re-think that strategy.

"I didn't push anybody," he said, "but I got pushed a couple of times and caught a couple elbows to the face."

Foster did catch one home run ball as he was waiting in the bullpen, a blast off the bat of Baltimore's Mark Trumbo.

"I figured the Home Run Derby would be the best," Foster said, "and it ended up being the best."

It was the best for other reasons. During a break in the Derby, the PHR contestants were taken out to the second-base area to be announced.

The only autograph he obtained was from Rollie Fingers, a Hall of Famer, but hardly a recent player. Rollie retired in 1985.

It's his favorite sport, although he also plays football, basketball and wrestles.

"It's my favorite sport because of the team bonding, and there are a lot of opportunities to do great things in the sport," said Foster, who pitches, catches and plays shortstop.

At the All-Star Game on Tuesday night: "We got great seats," Foster said. "We figured they'd give us their bad, nosebleed seats where you couldn't see anybody or see the ball. But they were pretty decent seats."

What a great experience, what a great summer, for a great young man, who's the son of Woody and Amber Foster.

"I'm super proud of him" Amber said. "He's a pretty great kid. He can be ornery at times, like all teenage boys, but he always gives it his all and takes pride in doing his best in everything he does, whether it's school or sports.

He's a straight A student, by the way. His favorite subject is PE, but "I don't count that as an actual school subject where you have to try," Woodrow said.

"Like I tell him," Amber said, "'It doesn't matter how good at sports you are, grades come first. If you want to go to college and you want to make it in the big leagues some day, you've got to study just as hard as you try at baseball.'"

Keep chasing your dreams, Woodrow, not Pokeman. And listen to your mom, you can't go wrong.