​round of NFL Draft​

Russ Bell (left) meets with Jefferson City Jays senior Devin Roberson last month at Adkins Stadium. A week after they met, Roberson wiped out Bell's school record in the discus during the Ladue Relays in Chesterfield.

JEFFERSON CITY, Mo. --- You're driving down the street, minding your own business, when something comes flying at you.

Although you could make the argument the flying object was courtesy of Superman.

It was April 20 in Chesterfield at the Ladue Relays, when Jefferson City senior Devin Roberson launched the shot --- in this case, the discus --- heard 'round the world.

Just like a good basketball player, when the ball leaves the hand, he/she knows the shot is good. Or a golfer as soon as he/she makes contact, they know.

Ditto with the discus.

"For sure," Roberson said. "When it leaves your hand, you know it. It came off my hand really good and I got through the ring really well."

"I knew it was a good mark, I just didn't know what it was," Jefferson City throws coach Chris Lueckenhoff said. "It took them a while to figure out where it (hit) on the street from the ring, and I told Devin that it wasn't probably as good as he thinks it is.

Roberson's effort broke the school record that had stood for 20 years. Put here's much more to put this throw in perspective:

^ It's the third-longest throw in the nation by a high school athlete this year.

^ At the University of Missouri, the school record in the discus is nearly four feet shorter than Roberson's heroic heave --- and that's a school record that's stood for 43 years.

^ And this: the throw for last year's NCAA discus champion was 198-2 --- more than seven feet shy of Roberson's mark.

Yes, Roberson is throwing disc with a weight of 1.6-K, while college athletes are throwing a 2-K. Still ...

"I knew he was going to be a good one when I first saw him. He's special," head coach Melvin Myers said. "I imagine if he trained to be in the sprints, he could do that too, because he's that type of guy.

"I used to try to get him to move over and do some sprints, because I coached football back then and he played quarterback and I wanted him to get faster. But he always wanted to do throws and once he's put his mind to it, he's done a pretty good job."

Said Lueckenhoff: "Kids like this don't come around very often. He's just a freak athlete. You saw him on the football field and now in the discus and shot put, he's just above and beyond everyone else."

The 6-4, 250-pound Roberson, who's committed to Mizzou, is the defending state discus champion, which should be no surprise. He comes by it honest --- his sister, Lexi, won the state championship in the shot put for the Lady Jays in 2015.

But Devin's winning throw last year was only 182 feet, 3 inches.

Roberson's throw of 205-3 wipes away the previous school record of 202-11 set in 1999 by another Jays great, Russ Bell, who went on to be a multi-time All-American at Mizzou.
The two recently met.
"A week before I broke his record," Roberson said, "he came to one of our meets. I met him and chatted with him about throwing the discus, and throwing at Mizzou and what to expect ... tips on how to handle college, things like that.

As is Devin Roberson.

"He's a great kid," Lueckenhoff said. "He's the type of kid that if you had a daughter, you'd want him to date her. He's a stand-up kid and he works hard.

TRACK AND FIELD,  AND THROWING THE DISCUS AND SHOT PUT, were not Roberson's top sports priorities growing up.

"I was definitely more of a football guy," he said. "But I started doing track in middle school and I started developing a love for it and when I started high school, that's when I really started looking more at track."

When did his eyes open to the fact that he's simply better at this than most guys?

"My sophomore year," Roberson said, "I made a really big jump from my freshman to sophomore year and I'm thinking, 'Oh man, (my marks) are pretty good for a sophomore.

"If I stick with this, I could be pretty good."

As great as he is in the throws, Roberson didn't enjoy anything close to that level of success playing football. In two seasons as the starting QB, the Jays went a combined 7-13 and lost in the first round of districts both years.

Which is greater? The joy and satisfaction he's getting from track and field, or the disappointment he experience in football?

"That's a good question," Roberson said. After a long pause, he continued. "I would probably say the track high, but I don't really know how to describe it. It's just two different things.

"(Playing football) was definitely a great experience, I wouldn't trade it for anything. I wish things would have gone better, but I had some really great times with my teammates and coaches. It was just a really great learning experience."

In less than three weeks, his high school career will come to an end --- and that makes Roberson shake his head in disbelief.

"The fastest four years of my life, it's been more like a blur," he said. "I still remember my first day freshman year ... it's just crazy that I'm about to be an alumni of Jeff City."

From here, there seems to be no ceiling to what Roberson can accomplish.

"I could see him being really, really good at Mizzou," Myers said, "because I'm sure they'll put some more weight on him and he'll get even stronger. And once he concentrates on just being an explosive thrower, he could be even more special.

"I can see him moving on and being a national champion at the next level, I think he has the drive and the mentality to be able to do that."

After that, there would be only one thing left, the Olympics.

"I think about it once in a while," Roberson said. "I watch videos of the pros throwing in the Olympics, and it would just be super-cool to be in that environment some day.

"But that's a long ways away. I have short-term goals to attend to, now."

Like Saturday's start to the postseason and the Class 5 District 6 meet at Blue Springs, Step One on the path to the Class 5 State Championships on May 24-25 at Adkins Stadium.

Look out soon for a flying disc near you.

"I'm super-pumped," Roberson said. "The season's been awesome, but it's gone by super-quick. I'm just trying to keep focused on my goals.

"I've had ups and downs, that comes with every season, you go through your slumps. But the best part is overcoming those things."

Whatever happens the rest of this season or the seasons to come, the results won't be from a lack of effort.

"You see it all the time --- kids who are really good athletes, but don't put the work in," Lueckenhoff said. "And kids who aren't nearly as good, you see them put a lot more work in. But Devin's going to outwork you, even though he's got really good marks. He's going to work to get better marks, he's doesn't want it to be close.

So far, so very, very good.

Roberson's amazing career as
thrower for Jays drawing to close 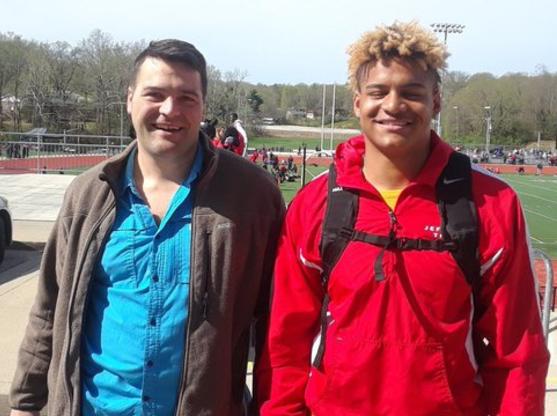