JEFFERSON CITY, Mo. --- The Helias Crusaders finished second at last year's Class 3 State Golf Tournament, and they're one of the favorites to win it all this year.

So what makes them so good, anyway?

"We hit the ball well," Helias coach Jay Higgins said, "we drive the ball a long way, and our short game is really good."

We could end the story right here, because it seems the Crusaders have solved the riddle of sports' Rubik's Cube.

The physical part, anyway. But if you've ever played the game, you know the mental aspect is a significant part of this golf riddle.

"You have to help them think their way around the golf course," Higgins said. "Course management and the aspects of the mental game ... that's what a golf coach does."

Helias won the District 5 championship Monday at Whispering Oaks in Marshfield, edging Springfield Catholic by five shots, 314-319. There was basically no chance of those two teams not advancing --- third-place finisher Bolivar lagged behind by nearly 40 shots with a 357.

"I looked at the district and it was between Springfield Catholic --- they've been good forever--- and us," Higgins said. "It was really just a matter of who would finish first or second.

"To be honest with you, we were very average. We left at least 10 strokes out on the golf course."

Being long off the tee and good around the greens, however, is a lethal combination.

"Our guys just launch their drives," said Higgins, who's in his first year as head coach after serving as Dan Campbell's assistant for five years. "We are so much longer than any team we've ever played ... we're 30-40 yards longer than probably 90 percent of the kids we play.

"But our biggest advantage over other teams is probably our short game."

And that's usually where golf's war is won.

"The kids always want to see how far they can hit a driver, but we use Turkey Creek (a par-3 course) for qualifying rounds," Higgins said. "We're really solid from 80 yards in --- that's where you score --- and other teams are not, that's how we beat everybody."

And they can putt. Sophomore Drew Higgins had just 21 putts in a round earlier this season ... and he's not even the team's best putter.

"Alex Gentry is probably the best putter I've ever seen," Jay Higgins said. "From 15 feet in, I would put him up against anybody I've ever played with,"

Gentry is the team's top player, as he's averaging "between 73 and 74" (based on a par-72 course) this season. Gentry, a junior who finished third at last year's state tournament, was fifth at districts with a 76 on the par-70 layout.

Senior Ethan Johnson, who carries a 79 average, finished sixth with a 77.

The key to winning the district title, however, was the effort by Owen Johnson. The junior is averaging around 84, but carded a 79 to finished tied for eighth.

"I'll tell you what," Higgins said, "Owen Johnson really stepped up for us. We don't win it without him. He's playing great right now, he's coming on at the right time."

Senior Lane Plunkett, who finished 23rd last year at state, tied for 10th with an 82, while Drew Higgins (the team's No. 2 player who averages 76) struggled through a tough day with an 88.

The next stop on the journey is the sectional tournament Monday at Carl Junction. Along with Springfield Catholic, Helias' top competition will likely come from Logan-Rogersville and Webb City.

"I think we have a very good chance to get out of sectionals," ay Higgins said. "We feel like we have a 90 percent chance, or better."

The state tournament will be held at a course the Crusaders are very familiar with, Columbia Country Club, as Helias is seeking it's sixth state golf championship --- but first in 28 years.

"If we're playing well and play up to our potential," Higgins said, "we're going to be hard to beat. I think if we do win it this year, we'll win it two years in a row."

It's just a matter of solving the Rubik's Cube. 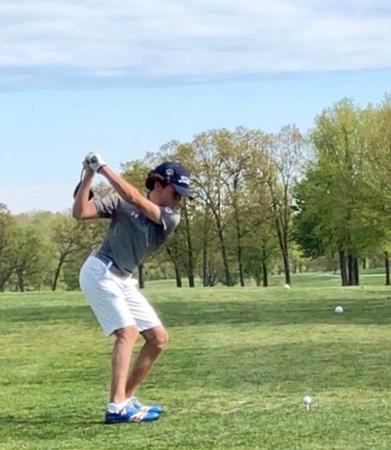 Helias junior Alex Gentry gets ready to launch a drive during Monday's Class 3 District 5 Tournament at Whispering Oaks in Marshfield.