Where he stops, nobody knows. But Drew Lock would go in the first round, wouldn't he?

That's what all the experts told us entering the NFL Draft. It was a Lock.

Some said the record-setting Missouri Tiger quarterback could go as high as No. 6 to the New York Giants on Thursday night. But that was not expected.

Possibly, he could go as low as No. 30 to the Green Packers. That wasn't expected, either.

For comparison's sake, it seems obvious it would be a lot more fun --- and informative --- to learn from Aaron Rodgers instead of Eli Manning. But then, New York City might be a bit more fun for a 22 year-old than Green Bay, Wis.

Neither happened, because NFL experts are no more accurate than weathermen.

The answer didn't come in the first round, it didn't come Thursday night. After a day's wait, Lock finally went to the Denver Broncos with the 10th pick in the second round, No. 42 overall, Friday night.

This was a surprise and a disappointment. Most rated Lock between the 20th and 25th best player available in the draft, but he dropped by 20 spots.

Well, Tom Brady was taken in the sixth round and he turned out to be decent. Not to say Lock will be Brady, but this draft undertaking is far from a perfect science.

Sometimes, you hit home runs. Other times, you strike out. Still others, you ignore big red flags and get burned.

Don't get lost in the details, because this was still a great night to be a Tiger, especially for Lock. And good for him. He stayed the course at Mizzou the full four years, through the worst of times for the program and some times that were quite good.

Then came this, the best. He earned it.

His first year, 2015, Lock suffered through the campus unrest spurred by the group Concerned Student 1950, and the university's subsequent lack of a response to the unrest.

The Fall of 2015 produced much more than a meltdown in the football program --- the team boycotted all football-related activities at one point --- it resulted in a meltdown of the entire university system --- both the president and chancellor resigned.

By any standard, this would be considered the worst of times.

Many would have run away as fast as possible, and some did. Lock didn't.

The Lee's Summit High graduate stayed the course, even after going 1-6 down the stretch as a freshman starter after replacing Maty Mauk, who was dealing with his own issues.

Out went Pinkel, in came Odom. Don't disregard or ever forget what Odom did for this program, which had hit rock-bottom with a thud louder than the latest Donald Trump tweet.

The struggles continued the next season as the Tigers went 4-8, but it ended with some positive vibes as Mizzou won two of its final three games.

And for this discussion, let us also forget the ongoing mess with the NCAA.

With his selection, Lock becomes the fourth Tiger quarterback to be drafted the last 13 years.The first, Brad Smith, didn't play quarterback in the NFL, but was moved to wide receiver and had a nine-year career. The next, Chase Daniel, is still in the league after being a back-up quarterback for five different teams in his 10-year career.

Daniel has enjoyed the best possible world as an NFL quarterback --- other than being Brady or Rodgers, of course. Back-up quarterbacks get paid a lot of money to hold clipboard and not get hit by large, angry men chasing him.

Then there was Blaine Gabbert, a first-round pick and No. 10 overall pick of the Jacksonville Jaguars in 2011. Last fall, he just completed his eighth year with his fourth different team.

Gabbert would be the best comparison to Lock, at least at Mizzou. Both have NFL size, and both have rocket arms who can drop the deep ball on the head of a mosquito.

To say Gabbert's eight-year NFL career has been a bit underwhelming might be kind. He's been erratic in his sporadic starts, throwing for 48 touchdowns and 47 interceptions, and averaging just over 1,000 yards passing a season.

That might be good in high school, not so much in the NFL.

Here's believing Lock's stock dropped because many saw him as the second coming of Gabbert. Not fair, but so it goes. They're basically the same size with the same resume' coming out of college.

Here's hoping Lock will have an equally long, or longer, career as Gabbert, only much more productive.

This drop to the second round hurt Lock's prestige, to be sure, but even more so, it will hurt his bank account. Too bad, but this is still a night to be proud, both of him and for him.

In the end, what the kid from Lee's Summit did during his career at Mizzou --- both on the field and the decisions he made off it to stay --- will go down as one of the best, if not the best, careers in school history.

The next uniform Missouri quarterback Drew Lock will wear is that of the Denver Broncos this fall. 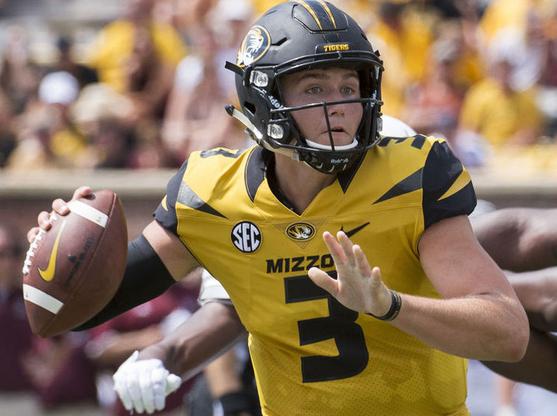 ​goes in second round to Broncos