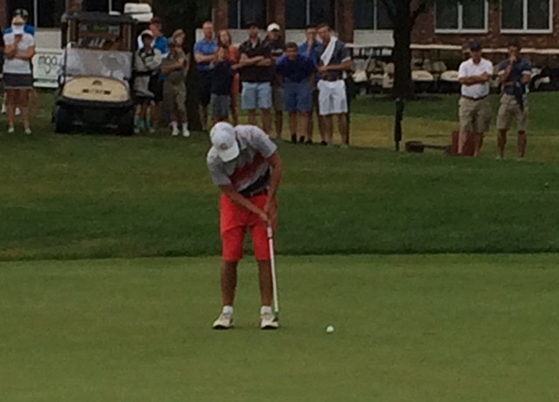 With Sam Migdal looking on, Hunter Parrish unloads his tee shot on the 16th hole, the 34th hole of the match, during the finals of the Missouri State Amateur on Sunday at Jefferson City Country Club.

Sam Migdal rolls in the championship-clinching putt on the final hole Sunday to win the 109th Missouri State Amateur at Jefferson City Country Club, and then is all smiles as he poses with the trophy.

​in State Am finals

at State Am; Farmer 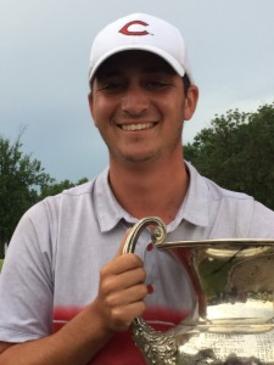 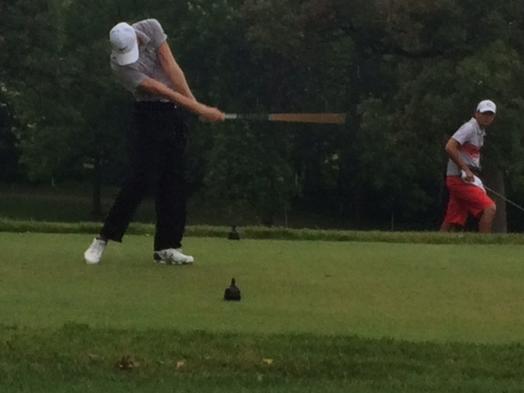 JEFFERSON CITY, Mo. --- It was only fitting that this great week had a great finish.

It was also fitting that a long week ended on a very long day.

Sam Migdal made a clinching three-foot putt on the final hole Sunday to edge Hunter Parrish 1 up and win the championship of the 109th Missouri State Amateur at Jefferson City Country Club, ending a 10 1/2-hour marathon day at the course thanks to a nearly 3 1/2-hour weather delay.

But on a rainy day, it was Sam's Sunday to shine.

"I haven't experienced anything quite like this," Migdal said. "It feels great, it's exciting."

Migdal, 24, now has a state championship --- this tournament is Missouri's version of the U.S. Open --- to go along with a national championship --- he won the Division II individual title last year with the UCM Mules.

"This goes right up there with nationals," Migdal said. "I consider it just as big."

This match was tighter than your best friend's wallet, as the biggest lead in the 36-hole affair was only 1 up. Neither player buckled when he fell behind.

"It was as good as any match I've ever been a part of," Migdal said. "He (Parrish) played a helluva match."

Likewise, Parrish tipped his cap to the champ.

"It was a great match --- Sam played great and did what he needed to do to win," Parrish, 23, said. "It was a long week out there, but I definitely had a blast."

"I wanted to get back out there," Migdal said. "I just didn't know if the weather and the daylight were going to allow it."

The delay was nothing new for Parrish, who sat through one that lasted 2 1/2 hours during Tuesday's opening round.

After halving 12 when played resumed at 6:25 p.m., the turning point of the match came on the next hole and after Migdal drove into the trees on the right.

His 115-yard recovery shot was a great one ... and was one that also got a great break.

"That's as good of a punch shot as I could hit, from where I was," Migdal said. "I hit it exactly where I wanted to, it hit the lip of the bunker, and it kind of popped it up and settled it down on the green.

"You have to have some good breaks."

Migdal (Ballwin) then rolled in the 25-foot birdie putt to go 1 up.

"That was a great putt," Parrish said, "and that ended up being the difference."

It was indeed, as they halved the final five holes. Parrish (Washington) had a pair of point-blank chances to pull even down the stretch, but both putts --- 10 feet on 16, eight feet on 18 --- slid just below the hole.

"Both of them," Parrish said, "I hit the putts that I wanted to, they both just broke a little more than I expected."

Still, you could say Parrish made the most of his opportunity this week. He hadn't been playing competitive golf in recent weeks and now, it will be put on hold once again as he finishes up his Master's degree in Business Administration at Columbia College, while working full time for his dad's concrete business.

"I sat this week out to play and after this," he said, "I'm not really sure when I'll be playing again."

Whoever won the tournament would be a first-time champion, as neither had advanced past the second round in their previous appearances.

"I was nervous and I'm sure he was nervous," Migdal said, "but he hit some really good shots, especially coming down the stretch."

But on a day at the course that lasted 10 1/2 hours, Migdal simply hit one more good shot, a process that takes less than two seconds. That was the difference.

LASTLY, HERE'S A SHOUT OUT to the Missouri Golf Association and the Jefferson City Country Club for a wonderful week of golf and hospitality. It probably wasn't flawless or perfect, but it sure seemed that way, weather or not.