JEFFERSON CITY, Mo. --- If not for one rough outing last year, Joey Johnson of Springfield would certainly be in uncharted water.

As it is, he's still in control of a very elite ship.

Johnson won the Missouri State Amateur in both 2013-14, before losing in the finals last year to Mitch Mather. That match certainly emphasized today's youth movement, as Johnson was 21 and Mather only 20 at the time.

Johnson was denied the trifecta, which would have made him the first player in the history of this grand event to win the championship three straight years.

Could you imagine winning four straight? That could have been a possibility, if not for that loss to Mather.

But after winning his first match Thursday at Jefferson City Country Club --- a 4 and 3 decision over Jeremy Reidelberger --- Johnson is now trying to join an elite group to win the tournament a third time.

"The Missouri Amateur is great tournament," Johnson said. "I've had a lot of success in it and it's been a great experience."

This match was another great experience for Johnson, who recently wrapped up a distinguished career at Missouri State. Early on, he won three straight holes, 2-4, with two birdies and a par to build a 3 up lead.

"Getting down early, that's a tough battle to come back from," Johnson said. "So coming out ready to play and hopefully getting a lead, that's the key."

It looked like a blowout, but Reidelberger won the next two holes to get back in it.

"It was a battle, he made me play well," Johnson said.

Johnson did, as he won seven and eight on this rollercoaster front nine to regain his 3 up advantage. It never dipped below that the rest of the way, before Johnson --- who was 4-under on the day --- closed out the match by draining a 12-footer for birdie on 15.

"I hit it well, I hit my driver well," he said. "And the times I didn't, I was able to get up and down for par. I think I played a solid match."

Like everyone, Johnson battled early nerves. But being a two-time champ certainly helped ease the stress.

"My experiences in the past have helped me get past those (nervous moments), I think, and really be able to settle into my game," Johnson said. "It's something I can look back on and say: 'I've done this before, so do it now.'"

If Johnson does go all the way this week, he'd become only the third person to win the championship three times, while five have won it four times.

Win or lose, this will be his last Missouri State Amateur.

Johnson plans to finish up school and earn his degree this fall at Missouri State, before turning pro next spring "and see where that goes," he said.

"I'll probably play a lot of Mondays (trying to qualify for events on the Web.com Tour) next spring and summer, and then go to Q-School next fall."

In the end, Johnson --- the No. 2 seed --- had little trouble advancing to the Round of 32. The No. 1 seed and tournament medalist, Luigi Botta, had even less trouble.

Botta flew from the gate, winning the first four holes and never looked back in a 6 and 5 win over Devin Brown.

"That was a nice start for me, it was a burst of confidence," Botta said. "But you can't be certain you're going to win a match, even if you win the first four holes. It takes a lot more effort than that.

"But it was a good way to start way, certainly. It took the pressure off my shoulders, I was able to play freely and I kept playing well."

Brown made it easy on Botta, as the Mount Vernon golfer played the first four holes in 4-over.

"He didn't play phenomenal, but I feel like I hit a lot of good shots," Botta said. "I should have good feelings going forward."

But first, a few more good feelings about this day --- Botta, a native of Italy, turned 21 on Thursday. Call this a nice birthday present.

"Hopefully," he said with a smile, "I'll make myself more and more presents as the week goes on."

WHILE BOTTA AND JOHNSON CRUISED TO WINS, the other eight players seeded in Top 10 went 5-3. The lowest seed to get knocked out was No. 5 Derek Reynolds (Springfield), who lost 1 down to Brad Dixon (Lake Ozark).
Another who went down was No. 9 Chad Niezing (Manchester), who fell 1 down to Jefferson City's Kirk Farmer in a tightly-contested fight to the finish.

Farmer, who shot an even-par 72, held a 2 up lead after nine, before Niezing pulled even with birdies on 10 and 11. It remained All Square until 17, when Niezing made bogey and Farmer a par to go 1 up. Both parred the 18th to end it.

The Round of 32 will be played Friday morning, before the field will be trimmed to the Elite Eight in matches Friday afternoon. 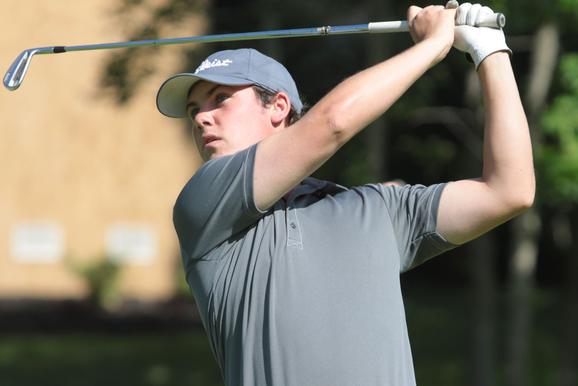 Joey Johnson of Springfield is gunning for his third Missouri State Amateur championship in the last four years this week at Jefferson City Country Club.

Johnson eyeing State Am history;
local golfers move to Round of 32