Kirk Farmer tees off on the first hole Wednesday during the 109th Missouri State Amateur at Jefferson City Country Club. 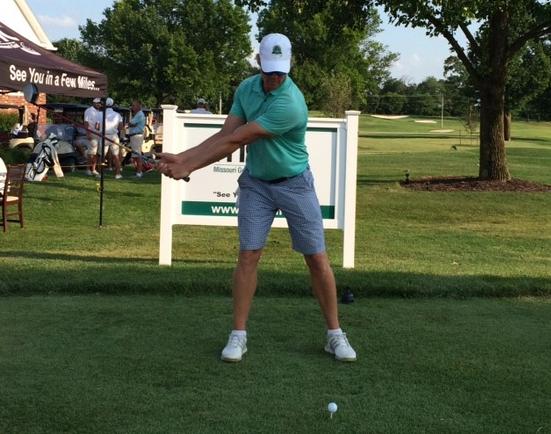 Then came the snowman.

Making a snowman in the front yard with your kids in December is fun, making one on the golf course during a tournament in June is not.

But after moving from comfortable to uncomfortable and squarely onto the bubble --- thanks in large part to that triple-bogey 8 --- Farmer gathered himself to play the final four holes in 1-under to make the cut by one stroke and advance to Thursday's match play at the 109th Missouri State Amateur at Jefferson City Country Club.

"I really do think I do my best when my back's against the wall," said Farmer, who shot a 79 on Wednesday after carding a 74 in the opening round on the par-72 layout. "It got down to where I was almost out of it halfway through the round, then I played better on the way in.

Starting on the back nine, Farmer had a two-stroke penalty for a lost ball on the par-5 15th that led to the 8 --- which, in turn, led to an opening-nine 41. That was followed by a double-bogey on the first hole and bogeys on four and five --- sandwiched around a birdie on the par-3 third.

That put him at 10-over for the event --- and that ended up being the magic number, with four of those players being eliminated in an 11-for-7 playoff that trimmed the field to 64.

"When things aren't going that great," Farmer said, "it's hard to get those negative thoughts out of your head, especially when you don't play a lot of competitive golf."

But the former football/golf star for the Jefferson City Jays, and starting quarterback for the Missouri Tigers, gathered himself.

"I kind of knew I had no margin for error," he said.

He made no more.

After making a par on the sixth with a good up and down, he two-putted for par on both seven and eight, bringing him to the par-4 ninth. After booming a drive about 330 yards, he hit a sand wedge to 12 feet and drained the birdie.

He survived and now it's on to match play, which starts Thursday morning.

"Anything can happen, it's one on one, it's totally different," said Farmer, the No. 56 seed who will meet the No. 9 seed, Manchester's Chad Niezing. "It's a lot of fun, I'm looking forward to it."

Leading the local contingent that advanced to the Field of 64 is recently graduated Southern Boone All-Stater Walker Kesterson, who garnered the No. 8 seed after rounds of 74-74.

His scores weren't the only thing that were the same.

"My rounds were very similar," said Kesterson will meet No. 57 seed Drew Hatten (Leawood, Kan.) in Thursday morning's first-round match. "I hit 14 greens both days, I the ball pretty well both days."

With stroke play behind him:  "I really enjoy match play, I've always taken the par-somebody-to-death strategy into it," he said.

"But every day is different. Any guy can come out any day and shoot a (low) number, you just don't want to get down three thru three, then you're chasing all day."

One of Kesterson's rivals also had two solid days of qualifying, as Kory Franks (Blair Oaks) had rounds of 72-75 that earned him a tie for 12th, a No. 13 seed and a first-round bout with Jefferson City's John McCulloch (76-77, No. 52 seed).

MITCHELL MATHER DIDN'T BRING his 'A' game to Jefferson City in defense of his championship this week.

To be more precise, he didn't bring his 'A' putter.

But he's still alive, because he did what he had to do --- survive and advance.

Battling a faulty putter, Mather shot a three-over 75 Wednesday to give him a 36-hole total of 153 to make the cut by one shot and advance to the 64-player stroke field competition that starts Thursday.

"But both days, I really struggled on the greens. The first day, I wasn't really hitting my lines, I wasn't reading them right. I worked on it after my round (Tuesday) and I thought I found my stroke, and I thought I hit a lot more good putts (Wednesday). But I still couldn't get anything to fall."

Mather --- a native of Lebanon who just finished his college career at Missouri State --- certainly enjoyed that championship moment he felt last year after winning the title at Buffalo Ridge in Branson.

That moment has lasted a year.

"Getting the trophy," he said, "is such a great honor, seeing all those great names like Tom Watson, Payne Stewart, Jim Colbert ... all those guys on there. It's pretty cool."

Did winning one take the pressure off, because he's been there and done that? Or was there even more pressure as the defending champ?

"Both," he said without hesitation. "Certainly, it relaxed me more in the weeks coming into this one than I've been the past. But there are still nerves there, saying: 'Ok, let's try to defend this, let's try to prove yourself a little more.'"

"I'm hitting the ball just as well as I did last year," said Mather, who made the cut despite making just one birdie in 36 holes. "But last year, I was putting really well. And when you're putting well, it takes a lot of pressure off the rest of your game."

His second round was certainly much better than his first-round 78, and not just by that three-shot margin. After playing Tuesday morning and sitting out a 2 1/2-hour weather delay, he entered a wind tunnel Wednesday.

"The wind was really howling and it was a tricky wind, it was hard to tell where it was going," Mather said. "It was a lot tougher day today, for sure."

Not for everyone, as Luigi Botta shot a blistering 66 in the calmer morning conditions Wednesday to win medalist honors at 4-under 140.

"Obviously, it was a very good round," he said. "I very much enjoyed playing golf today."

Botta will be a junior this fall at the University of Missouri after moving to Columbia --- and moving to the United States --- in 2014 from Italy, where he was raised and where he played golf on the Italian national team since age 14.

This guy's got game on an international level.

"My game is very good overall right now," Botta said. "I'm hitting good drives, I was always in the fairway, which meant I had a lot of chances to be aggressive with my approach shot. That turned into a lot of birdie opportunities."

Botta shot a 74 in first round, making four bogeys and only two birdies.
"I was a little disappointed with that round, my putting was just not there," he said. "What really made the difference is that I was able to make a lot more putts, they started dropping."

He finished Tuesday's 18 by bogeying the final two holes, saying "I guess I finished the round a little disappointed and took the frustration onto the first tee (Wednesday), for sure."

He birdied the first two holes, but three-putted for bogey on the par 3 third. After pars on four and five, he birdied the 446-yard sixth, which played as the second-toughest hole the first two days with a stroke average of 4.54.

"The birdie on six was a good turning point," Botta said. "That gave me some confidence and allowed me to finish strong."

That started a stretch of three birdies in four holes and four birdies in seven, as he finished with nines of 32-34 to win medalist honors by one shot over Joey Johnson, who won the 2014 championship at Norwood Hills Country  Club in St. Louis.

Being the low man in the field of 149 players is certainly an honor, but there's also this --- only twice in the previous 14 years has the medalist gone on to win the state championship, most recently when Johnson did it two years ago.

"That's not a great percentage," Botta said. "But hopefully, I can change that."

"I don't take any match for granted, even with the 64 seed," Botta said. "I know how golf is, I know how match play is. Everything starts over."