This story was originally posted Feb. 5, 2016, two days before Super Bowl 50 between the Denver Broncos and Carolina Panthers.

SANTA CLARA, Calif. --- Here's a brief timeline in the life of Sylvester Williams:

* NINE YEARS AGO, Williams wasn't even sure he would graduate high school.

* EIGHT YEARS AGO --- and after graduating from Jefferson City High School in 2008 --- Williams didn't consider going to college, let alone playing college football. He hadn't played organized football until his senior year with the Jays, after all, and he played very, very sparingly.

* SEVEN YEARS AGO, Williams quit his factory job, entered Coffeyville Community College in Kansas, and walked on to the football team.

* FOUR YEARS AGO, Williams became a Division I All-American at North Carolina.

* THREE YEARS AGO, he became a first-round draft pick of the Denver Broncos.

* SUNDAY, he'll be playing in his second Super Bowl in three years.

* EVERY DAY, Sylvester Williams is living a dream ... this unlikely, improbable dream.

What a wonderful life.

"When I was in high school, I never dreamed that I'd be on the stage that I'm on now," said Williams, 27, a defensive lineman for the Denver Broncos who will meet the Carolina Panthers in Super Bowl 50 on Sunday. "I always dreamed about having a good future and having a good job, but never being in the Super Bowl .... not once, but twice. It's crazy.

"It's very special. I remember watching the Rams play in the Super Bowl with my father and a few years later, I'm playing in the Super Bowl. I'm so blessed when I look back on my life ... I've been on the biggest stage in sports, period, twice.

"When I sit back and think about it, the kind of blessings God has sent my way ... it's just amazing."

Williams' story of perseverance has been well-documented by KRCG (for more, please see http://krcgtv.com/sports/content/super-story-for-super-sunday?id=1001865), and includes a significant constant --- Andrea' Salmon, a teacher and coach at JCHS who helped guide Williams through some difficult times.

"I met coach Salmon around my freshman year in high school," Williams said in an exclusive interview. "Ever since that moment, he touched me. There were a lot of people in the school district --- and granted, it was my fault because I could have been better --- who gave up on me. When I was struggling in school, coach was the one person who would pick me up, he was just there for me through it all.

Salmon will be at Sunday's game in Santa Clara, Calif., and he still talks to Williams before every game. Williams isn't the only at-risk kid Salmon has helped.

"That's the type of person he is," Williams said. "I see him doing that now with other guys in high school, guys who are struggling. I'm blessed and a lot of other people are blessed, being able to know coach.

"There was zero chance I'd be here right now without him guiding me and helping me through situations. Zero chance."

Those aren't big numbers for the big man, but noseguards never have big numbers. Their job is to occupy two blockers, freeing up others to make the tackle.

"I just want to hold up blockers and take on those double teams the best I can, Williams said. "It's a position that you've got to be a man to play and I know that. I actually like playing it and watching our linebackers flow and make the plays, that's what's most important at the end of the day."

Before we get to Sunday's game, a week of lunacy leads up to it.

"It's very crazy," Williams said. "As soon as you get off the plane, you've got media watching you every moment, every day. They put you in a room with media from all over the world and they ask you all types of questions, about this and that."

Sometimes, I don't like us all that much. The second go-round, however, has been easier for Williams than the first.

"Last time I came here, it was like, 'Whoa, whoa, whoa,'" Williams said. "Everything was just crazy, everybody was so excited. Now, it's like, I'm enjoying everything because I know at the end of the day, it's about winning on Sunday."

In all likelihood, Sunday will be Peyton Manning's final game. Will there be a period or an exclamation point at the end his career?

Williams certainly hopes it's the latter.

"He's a great guy, he's a very influential guy, he's a great leader," Williams said. "He leads by example with everything he does, the moment he walks into the building to the moment he leaves. If you want to know how to get through the day and become a great player, you just follow Peyton.

"It's amazing how hard of a worker he is, he gives a million percent effort."

Even though they play on opposite sides of the ball, Williams has gotten to know Manning.

"He'll sit down and have breakfast with you and at first, you're kind of nervous because you're thinking: 'Hey, this is Peyton Manning,'" Williams said. "But he makes you realize that he's one of us, he's like a brother to me.

"Thursday at lunch, we were talking about Snoop Dogg, because he came to media day. Snoop Dogg. So it is special, the type of person Peyton is."

Win one for Peyton? You bet.

"The lack of respect I think he's been getting all year," Williams said, "and the way people have been treating him, he's a legend in the game and somebody who helped mold the game the way it is now ... This is for Peyton."

As for other aspects of the game, here are Williams' thought:

ON THE CAROLINA OFFENSE

"They have a great offensive line, a great quarterback and a great running game --- that's really what keeps them above water, they run the ball so well, and that opens up everything else for them. So we've got to slow the run down and give us the opportunity to rush the passer."

"You have to be technically sound, you have to be gap sound, you can't leave a lot of holes in the defensive line. Because if you do, he'll find them. I think the key is to keep him in the pocket, contain him, and make him beat us throwing the ball. That's our No. 1 goal."

ON DENVER'S DEFENSE, RANKED NO. 1 IN THE NFL

"I think it's just the swagger that we bring. You bring a bunch of good players together and then you have a great leader like coach (Wade) Phillips, good things happen.

"We came back in April and we had a chip on our shoulders, being knocked out in the first round the year before (by Indianpolis). Coach Phillips came in and changed the whole defense ... it's just been unbelievable."

"He's a legend. The game plans that he comes up with, it sometimes amazes us how well it turns out. He draws it up and works exactly like it's supposed to."

"At the end of the day, we have the No. 1 defense in the NFL and we have one of the best quarterbacks of all time, with great receivers on offense ... all we've got to do is go out there and play our game. No matter what anybody else says, if we do that, we can come out victorious."

Sylvester Williams has become a force on the defensive line for Denver.

The wonderful life of S. Williams 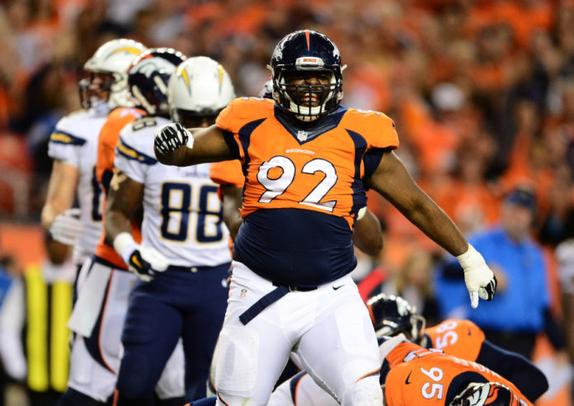