For much more on Sylvester Williams and his amazing journey, as well as the help he received along the way from Andrea' Salmon, please see story to the right.

Super Bowl champion Williams
returns to 'give something back'

JEFFERSON CITY, Mo. --- You might think this day was about Sylvester Williams' return to the field of his high school glory.

This day was about his return to his high school classroom, where he did much more standing on the sidelines, watching and learning, than creating moments of glory.

But his days of glory were certainly coming.

Sylvester Williams and his interesting and amazing football journey made a stop Saturday at Adkins Stadium, the place where he played his first year of organized football with the Jefferson City Jays --- his senior year.

He was not a factor on Friday nights.

"There's a lot more to playing football than being big and strong, and even being athletic," said the 6-2, 320-pound Williams, who's a 2008 graduate of the school. "There's a lot to learn and that's what I had to do.

"But I look back at it and I see all the opportunities that were presented to me. I didn't really know much about football, but I just continued to work hard from there. I think that's the key to everything you do in life --- if you work hard at what you do, you can become really successful at it, it doesn't matter what it is."

There's no better example than Williams. None. For on this day, he returned as a former first-round draft pick and a Super Bowl champion with the Denver Broncos.

"Being able to have a Super Bowl ring," said Williams, 27, "and come back and be able to share that with people, that's such a great feeling. That's the message I want to give to the kids, just keep working hard and never give up on yourself. You see stories all the time, like Michael Jordan getting cut (from his high school basketball team) and becoming a Hall of Fame basketball player.

Williams was the marquee attraction at a free youth football camp that was attended by more than 120 players and would-be players, ages 8-16.

"I just hope it keeps growing and growing and keeps getting bigger and bigger," Williams said. "Some day, I'd like to have every kid in Jeff City out here and be able to work with them and have fun. It's truly a blessing to be able to give something back.

"I wanted to be able to come back and do some of the things coach (Andrea') Salmon and coach (Ted) LePage did for me, and that's help me along the way. It's just a great school to be a part of, because there are a lot of people here willing to help."

Salmon, in particular, was a vital guide on Williams' path to success.

"Some of the things he did for me," Williams voiced trailed off, "... I look at him as a father figure. It's truly been a blessing to have him be a part of my life; I give him all the credit because without him, it would have been impossible for me to do any of this." 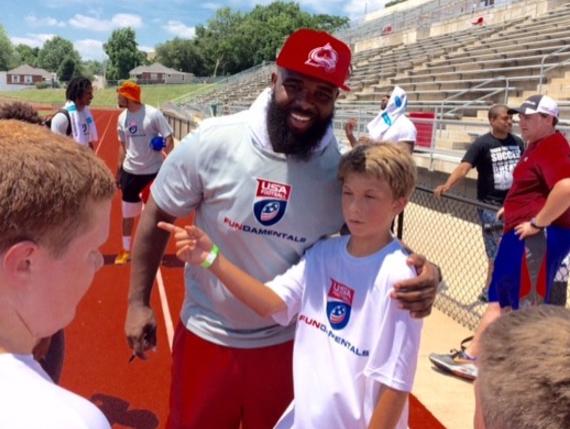 Along with LePage and other coaches on the Jefferson City staff, Williams was assisted at the camp by Kody Walker, a 2011 graduate of JCHS and former All-State running back who will be a senior at Arkansas this fall.

Williams may not have known it at the time, but while he was leaning on Salmon as a role model, he was one himself.

"He's definitely been a role model for me," Walker said. "I remember my freshman year (when Williams was a senior), he just talked to me about working hard --- that guy is one of the hardest workers I've ever known.

"The path that he took wasn't the easiest, but he made it. He never gave up and he had faith."

"It was hectic, a lot of this and a lot of that, dealing with family and the media ... it was a crazy week," Williams said. "You're just so excited to get to game day so you can just relax and play football."

In the end, the Broncos played better football --- Denver 24, Carolina 10 on Feb. 7, as Denver's defense --- led by the game plan of defensive coordinator Wade Phillips --- stifled Cam Newton and the high-octane Carolina offense.

"Coach Phillips drew up a master plan," Williams said. "He told us: 'If you execute the game plan, you're going to win the Super Bowl.' So we knew if we were able to stop the run and make (Newton) throw the football, we were going to win.

"That was our main focus and we were able to do that, and that put us in a position to be World Champions."

"That was one of the most exciting moments of my life," Williams said. "I literally ran off the field and went straight to where my family was sitting, because I wanted to share that moment with them. To me, that's what it was all about.

"My family, they were champions just as much as I was."

ON THE BRONCOS THIS SEASON

Peyton Manning has retired and the Super Bowl MVP, linebacker Von Miller, says he'll hold out this season in a dispute over money. That can't happen if the Broncos expect to contend, Williams said.

"I don't think we can be successful without Von. We need him. But I trust the Broncos and I trust him to get everything figured out, it just takes some time. Obviously, when you're talking about that type of money, it's going to take some time.

"I just hope we get him back before training camp so we can compete for another title. I'm excited, man, but we 1000-percent need Von Miller."

"I'm not really concerned because at the end of the day, we trust coach (Gary) Kubiak to find the right guy. We believe in that. Those guys (most notably veteran Mark Sanchez and first-round pick Paxton Lynch) have been battling it out, giving it everything they've got every single day."

TO BE SURE, NOT PLAYING FOOTBALL until your senior year in high school has its disadvantages.

But it also has one, big advantage --- not getting hit as you're growing up.

"Definitely," Williams said. "I tell people all the time that my football timeline is very short. I don't have that wear and tear other guys have from playing football since they were Pee Wees. You think about Peyton Manning, he probably played football for over 30 years of his life, and I've only been playing for less than 10 years."

To be precise, it's only eight years.

"I'm healthy as a horse," Williams said. "I'm just praying for health throughout the whole season."

Sylvester Williams poses for a picture with one of the 120-plus football campers Saturday at Adkins Stadium.