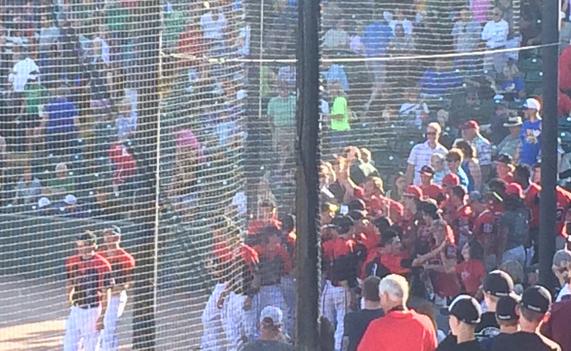 Proud? They certainly should be.

This season's Jefferson City Jays baseball team did something no Jays team had done in the previous two-plus decades, and that's make it to the Final Four.

And this is a program with a strong tradition, a program that's had so many good players and so many good teams through the years. This, however, was the team that broke through.

For advancing to the Final Four for the first time in 24 years and finishing second in the state in Class 5, the Jays have been named the KRCG13/Hy-Vee Team of the Season and awarded a $500 check to the school's booster club.

"First of all, a big thank you to KRCG and Hy-Vee for this honor," Jays coach Brian Ash said. "This type of award shows, once again, just how great the support is in our community ... I think that's really important.

"To be recognized for something you've done and being able to share it with our players, I think it will take a little bit of the sting away."

The sting came from ultimate dream falling short with an 8-2 loss to Francis Howell in the state championship game.

"We didn't bring the state title home and I know the boys really, really wanted it --- sometimes, you want things so much it kind of backfires," Ash said. "We played well, we really did, but Francis Howell has just been there more than we have and they handled the situation a little bit better.

"So yes, it was disappointing. But to do what we did and have the run that we had, I think the kids are starting to realize that we did something pretty darn special."

This run was for a lot of people, including the former players.

"For all the guys who came before us," Ash said, "and all the great teams Jeff City's had who didn't make it to the Final Four for whatever reason, we really wanted to win it for them."

This was certainly a noteworthy season for other reasons. The Jays:

* Had an early-season 4-0 swing on a trip to Georgia, when they showed the ability to win close games. They won those games --- against teams from Georgia, Florida, Alabama and Ohio --- by a combined six runs.

"We saw some really good arms, so to go down there and play four good teams and win them all, it was --- I wouldn't call it a shock --- but it was a pleasant surprise," Ash said.

* They won their own tournament, the Capital City Invitational, for the second time in three years after going 20 years without winning it prior to 2014.

"Anytime you win a championship, especially in a high-caliber tournament like this, it's important," Ash said.

* They finally busted through the blockade of Rock Bridge in the district tournament, giving Jefferson City its first district championship in eight years. This wasn't a monkey off their back, this was the entire zoo --- and made the rest possible.

* Finished with a school-record 28 wins.

"Nobody can ever take away what these kids accomplished," Ash said.

"They did a lot of great things this season. We finished second in the state, but we gave ourselves a shot --- we were one of the two teams still standing at the end. I think we represented ourselves and Jeff City as well as any group of kids could.

"Second place in the state with this group of boys, I'd say we did really, really well."

The Jefferson City Jays and their fans celebrate the team's 7-4 win over Lindbergh in the Class 5 semifinals June 2 in O'Fallon.