Okay, you can stop there, because Brad Hutchison already has you beat. At the very least, he has most of us beat.

Not only did he go to the Arctic Circle, but he went there on a motorcycle. The whole way. No planes, trains or automobiles, only a motorcycle.

Less than 12 months later, he was in the southern-most point of the United States, Key West, Fla. Again, he went by motorcycle. The whole way.

This guy might be the most interesting man in the area.

"It's something I really enjoy," Hutchison said. "When I was young, my parents always took us on a vacation ... these were car vacations, of course. But I've always loved to travel, even as a kid. And I still do.

"I'm just blessed to be able to do these things."

You could almost say his motorcycle is, at times, a time machine. Consider this experience he had during his 2015 trip to the Arctic Circle, a trip --- like the others --- he makes with three cousins.

During the journey, they took a ferry from east central Alaska across the Yukon River to the logging town of Dawson City, a town of 500 people in British Columbia, Canada, where they spent a Saturday night.

On a Saturday night in Dawson City --- a town with dirt streets and wooden plank porches and sidewalks --- the gritty, hard-working, hard-living loggers are ready to have a good time. Hutchison and his cousins were able to experience it, first hand.

"They had a little casino and they had a Can-Can type show, where they sing and dance," Hutchison said.

The girls, who weren't exactly runway model material, also did a slow striptease.

Gambling, dancing girls, booze ... the only thing left on this trip back to the Old West was fighting for no apparent reason.

"I was standing outside smoking a cigar and having a cocktail," Hutchison said, "and these guys would go out in the street and just start fighting. They just beat the you-know-what out of each other, then they'd go back in and drink some more, then there'd be another fight a little while later.

"They had those fights about every 30 minutes."

"It was the truest form of an old, western town," he said. "That was really interesting, I really enjoyed that."

BRAD HUTCHISON'S FAMILY SPENT some of his early years in Monterrey, Calif., before moving to Versailles. His love for motorcycles started when he was 15 and continued for the next 11 years, which included his college time at Southwest Missouri State (now Missouri State) and a few years in Texas.

It was in Texas where some significant things happened --- he was introduced to the insurance business and his motorcycle travels really took off. He rode his 1000 Honda Gold Wing in west Texas "about every day" and also made trips with a buddy to Mexico.

These days, you probably know Brad from his insurance business. He's been an agent for 39 years, the last 36 with State Farm in Jefferson City. 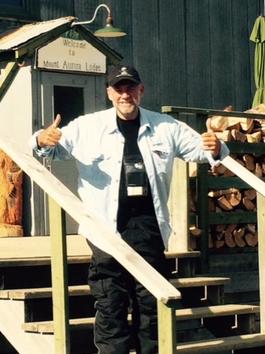 One of the listed amenities at the rustic Mount Aurora Lodge in Fairbanks, Alaska, is a nightly wake-up call so you won't miss the Aurora Borealis.

and travels of Brad Hutchison 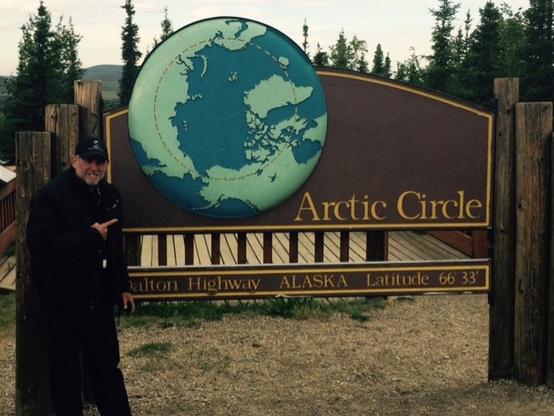 This year's trip to Key West, Fla., for Brad Hutchison and his cousins was a bit more gentle than last year's adventure to Alaska and the Arctic Circle.

Brad Hutchison was all smiles after reaching the Arctic Circle --- on a motorcycle, no less --- last July.

Now, he has no shortage of clients, as he's become a staple of the industry in Central Missouri.

"The great relationships you make, that's the key," he said, "and being involved in the community and getting to know so many great people. It's been a good life for my family and for me."

Along with his wife of 40 years, Lorna, they have four boys, who now range in age from 30-38. When the first son was born, the Gold Wing was sold.

But after a 35-year break --- some breaks are longer than others --- he returned to his passion. About 2 1/2 years ago, Hutchison purchased a Harley Davidson CVO, a fully-dressed cruiser that includes Sirius XM, heated seats and grips, and all the other comforts you could want.

"When the kids were all gone," Hutchison said, "I finally decided that it was time. I like being by myself --- with my job, I talk to people all the time --- so it's just a good getaway. I love the feel of the wind in my face, it's just me and the road, and you can see so much more on a motorcycle.

"You're aware of everything around you."

His three cousins wanted to travel to all 49 states --- Hawaii is a bit tough to reach by motorcycle --- so plans were hatched. All three of his cousins are Vietnam veterans, one Air Force and two Army, and are experienced riders, like Brad.

"Being with three guys in the military," Hutchison said, "you better be ready to go at 6 (a.m.), because they mean it. They called it kick-stands up at 6."

They'd usually travel about 300 miles a day and would stop at 3 p.m.

After some shorter trips in 2014, the first long venture came last July, a month-long journey that included a trip through Alaska to the Arctic Circle.

The further north they got, the more interesting it became.

"The scenery was absolutely beautiful (including Mount McKinley), but some of the accommodations are terrible," Hutchison said. "They were bad. Most of the time, I took my sleeping bag in with me and slept in it.

"And at that time of year, it was light 24 hours a day, of course, so they'd have dark clothes over the windows to help you get some sleep."

On their way from Anchorage to Fairbanks to the Arctic Circle, they saw and had to avoid plenty of wildlife, including numerous moose and bears. And the more desolate the area became, the higher gas prices got --- not surprisingly --- but not as high as you might think, a peak of about $4 a gallon.

"You paid whatever it was, because you had to have it," Hutchison said. "So I guess it could have been worse."

"Riding up in Canada and Alaska, some of the roads are pretty bumpy and not very well maintained, with huge pot holes. When you hit some slick spots with ice and snow and stuff, it can be pretty scary. But I've never wrecked this motorcycle."

But he came close, like when he ran out of gas about half mile from a gas station in the central Alaska wilderness.

"I had to pull off the side of the road and there was a cliff right there --- it was probably 2,000 feet or so down --- just a couple feet away, and there was no guardrail," he said. "I was getting off my bike, and the pavement was probably about two inches higher than the side of the road and when I went to put my foot down, I could not hold the bike up.

"The bike weighs about 900 pounds, especially when it's loaded with a tent, sleeping bag, and all that sort of stuff. I just didn't have enough strength to hold it up and I turned it over. One guy was in front of me and two were behind me, and they were quick to get to me, because here I was leaning back on my bike and the cliff was right there.

"So that was pretty scary."

As were the wildfires in that area during that time --- firefighters battled fires that burned a staggering 5 million acres during the summer of 2015.

"We could actually feel the heat from the fires, we were that close," Hutchison said.

But they made it to their ultimate destination. Let's just say, there's not a lot of fanfare once you make it.

"There's a sign and you get a certificate, saying you made it to the Arctic Circle, but there's not much else," Hutchison said. "But when we got there, I was visiting with a couple and it turned out that they're from Springfield, Mo. They work there and greet people who make it up there."

THE TRAVELING QUARTET HAS SEEN a lot during their travels, including Yellowstone and the Calgary Stampede and a stop in Sturgis, S.D., home of the world's biggest Motorcycle Rally.

They were in Sturgis a week before the rally actually started, but: "You couldn't tell the difference," Hutchison said. "The bikes had already filled the streets, the place was already packed."

This May, the crew headed south and hit numerous attractions during their three-week journey, to and from Key West. A few were:

* A World War II Museum in New Orleans that was "absolutely great";

* The USS Alabama Battleship and USS Drum Submarine in Mobile, Ala.;

* In Key West, the Hemingway House and Harry Truman's "Little White House," which was his version of Kennebunkport;

* Fort Sumter, a famous Civil War battleground that's on an island off the coast of Charleston, S.C.;

* A day spent sailing off the coast of Virginia. Brad has his captain's license to sail --- of course he does, would you expect anything less from this most interesting gentleman?

* A stop in York, Pa., where they took a steel-toed tour of the Harley Davidson plant where Brad's motorcycle was made;

* and Gettysburg, where they soaked up the richest of all Civil War history, before coming home.

So, what did you do in May?

"Both (trips) were spectacular, but couldn't be more different," he said.

Of course, neither would have been possible without the blessing of his wife.

"I couldn't go if she didn't let me go," Brad said. "She goes on short rides with me on the motorcycle a lot, but when we travel --- and we travel together quite a bit --- we'll go by plane or car."

His days of seeing the country, seeing the world, aren't done just yet.

"I still have a big bucket list," Hutchison said. "I've fulfilled a lot of them but every day, I keep thinking about new and other things I want to do and other places I want to go."

What's next? Next May, the crew is going up the east coast through New England, knocking out all of those states on their way to Nova Scotia. Then in 2018, they're taking a tour through the Southwest and West coast that, in theory, will check all 49 states off their list.

It should be interesting, don't you think? 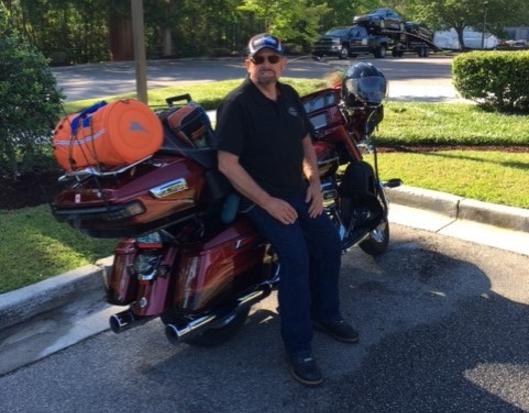