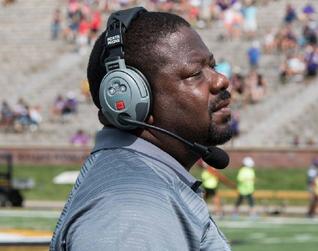 By any standard, that's no good. That's lousy. They don't give ribbons to high school football players for going 0-10.

Coaches don't get any ribbons for 0-10, either. Hickman's head coach during that winless season was Arnel Monroe, who died Sunday morning of an apparent heart attack.

The Kewpies were truly inept in Monroe's final season, especially on offense. They scored only 71 points the entire season , while crosstown rival Father Tolton scored 93 points --- in one game.

Hanging 93 points on your opponent isn't good, either, but for different reasons.

The Kewpies were outscored 441-71 and it would have been worse, if not for the mercy rule that makes the second half in these blowout games fly to the finish.

But in this case, you need to look beyond the scores. Because these Kewpies, under Arnel Monroe, were indeed competitive.

"He might have gotten more out of his team than any coach in the state of Missouri last year. When we played them, I told our guys that they would not quit. They just kept fighting and fighting  --- they played far beyond their talent."

This, however, was a non-issue when playing a team of Arnel Monroe's. There were no sore losers, even when it was 50-0.

"He may have done a better job of coaching this year than he's ever done. That's a huge statement to make, because I think he always did a good job. But this past year, they played so hard and so fast, every play, even at the end of the season.

"His record showed 0-10, but I even told him at the All-State meeting (last fall) that what he did was phenomenal, because he had guys out there who probably weren't even JV-type players. But they sure didn't act like it and they sure wore their school colors with pride."

What happened to this football program was beyond Monroe's control. So what did happen?

Battle, in its first year of varsity football, won the Class 5 state championship in 2014, with a team littered with former Kewpies.

In Monroe's first season as head coach, 2011, Hickman went 5-6 and lost in the first round of the playoffs. The next season, the Kewpies went 9-2, losing in the quarterfinals to the eventual state runner-up, Francis Howell.

Then Battle opened, Columbia schools were redistricted, and the bottom dropped out. The next three seasons, the Kewpies won just four games under Monroe, who had a record of 18-33 in five years.

Then came 0-10, a season that obviously did not sit well with Monroe, who's a 1985 graduate of Hickman.

"It really hurt him, it was hard for him," Tex Little said. "The thing he always said was that it wasn't fair to the kids, just because of the circumstances. He tried to stay optimistic the best he could, he just felt like they were really undermanned.

"But he didn't make excuses, he lined 'em up every week, and every week they brought it. They were in a lot of games, they just ran out of manpower down the stretch."

Little is the radio voice of the Missouri baseball Tigers, but he's also has done Hickman football games for years and years on KTGR.

Little was so close to the program, he was often part of a bulk email sent out to the team by Monroe.

"He did things like that, because he wanted these guys to earn it, he didn't want somebody to hand it to them. I think that's what he tried to teach these young men about being a Hickman Kewpie --- you're not indoctrinated into it, you had to earn everything you got."

Monroe was all about Hickman, from his playing days from 1982-85, before returning to the program in the early 1990s to rise through the ranks and eventually become head coach.

"He was definitely a true Hickman Kewpie," Little said. "You hear that term, Purple and Gold in your blood or whatever it might be, and he was definitely the type of person you'd put that tag on.

"Arnel dedicated basically his whole life to Hickman. He was always worrying about another individual, a player, a stepson, his own son, or a student ... but he really cared about people."

Arnel, nicknamed Spanky, cared about everyone, including the special needs students he worked with during school hours.

"He was all about trying to find that young person who needed somebody to help them better their lives. I can say he truly did that."

And that's what truly matters, much more than wins, losses and final records. Nobody likes 0-10, but it happens. It's how you deal with something like that, that's what defines you.

Arnel Monroe was truly a winner, no matter what the scoreboard said. He did things the right way, both on and off the field for so many of our young people.

Rest in Peace, coach, you will be missed.

"He might have gotten more out of his team than any coach in the state of Missouri last year."