FULTON, Mo. --- The first meeting between Boonville and Fulton was close.

The rematch was a replay.

Now, we get the re-rematch.

What was the difference in the first two games, both Boonville wins? Basically, one batter, one play, one pitch.

They were that close.

"The first game was decided on an unearned run we gave up, the second game was decided on a home run their guy (Kole Ficken) hit in the bottom of the fifth," said Fulton coach John Brinkmann, as the Hornets (17-9) prepare to battle the Pirates (25-5) in the Class 4 semifinals at 7 p.m. Friday at CarShield Field in O'Fallon.

"Boonville's a great team, but I told our guys after both games: 'Look, we made two little mistakes, and that's what happens when you play a quality team.'

Will the third time be a charm? Well ... besides going 2-0 against the Hornets this season, Boonville is ranked No. 1, Fulton is unranked.

In other words, these Hornets are definitely underdogs. But then, being the hunter and not the hunted isn't all that bad.

"I think our guys are actually feeding off that," Brinkmann said. "They're a little hungry to get them again, because I think they felt kind of cheated the last time we played them. They didn't really like that feeling and I think they've been ready to get that taste out of their mouth."

It won't be easy, to be sure. Among Boonville's top players, look out for Dalton Bealmer --- a 6-3, 200-pound senior who was a two-way starter in football and who's a force in baseball, too. Bealmer was the top vote-getter on the NCMC All-Conference team.

"He's a scary kid," Brinkmann said, "but their whole lineup is scary, honestly. They can hit the baseball, 1-9."

Bealmer had three hits, including a three-run homer, and four RBI in Boonville's 7-5 quarterfinal win over St. Joseph Lafayette. And consider this: Bealmer now has three times as many home runs (6) as Fulton's team (2).

"We're not a big power-hitting team," Brinkmann said, "but we're going to single and double you to death and we're going to make the pitcher work. We're going to battle, try to get on base and scrap a few runs across."

Junior first baseman Jared Peery does more than just scrap, as he's hitting .419 with one of those home runs and 33 RBI ---just three shy of the school record.

"He's our big RBI guy," Brinkmann said. "Hopefully, if he does what he normally does this weekend, he'll get the record."

Junior Luke Gray bats leadoff and is hitting a tidy .449 with 15 RBI and a team-high 25 runs scored.

"He really sets the table for us," Brinkmann said. "He works the pitcher and does a great job getting on base."

While senior Zach Franklin is batting a lofty .353, his biggest asset could be his leadership. In the quarterfinals --- and after Duchesne had taken a 3-0 lead --- Franklin proved it.

"He brought the team together, by himself, and kind of sat them down, calmed them down and got them re-focused," Brinkmann said. "We scored two runs the next inning.

"Zach's one of our four seniors and they've all done an awesome job. I'm more than impressed with the way they've led this team this year."

Friday's probable starter for Fulton is senior righthander Tristan Steffans, who's 5-1 with a 1.63 ERA. To say the least, Brinkmann thinks highly of his ace.

"In my book, he's the best pitcher I've seen for or against us all year," Brinkmann said. "He's not going to blow people away, but he's going to throw strikes and he's going to battle. He's probably the toughest competitor we have on our team."

"The week after our first practice in March, I said this team had a chance to win a district title," Brinkmann said. "Now, there were times during the season when I probably shouldn't have put my foot in my mouth."

At one point, the Hornets lost four straight, the last of those coming in the second game against the Pirates.

"But I knew we had the talent, sometimes it just takes a while to put it together," Brinkmann continued. "I think we've really turned it on the last few weeks; we've been coming together at the right time.

"From our first practice, I told them that we'd go as far --- or not as far --- as you're willing to take us. That's how they've treated it all year, they've really embraced it."

While Boonville is seeking the school's first state baseball title, Fulton is chasing No. 2. The Hornets won the Class 3A state championship in 1990 --- back in the days when we still had an "A" on classes. And back when Brinkmann, 26, was just two months old.

"The community's been awesome, they're really bought in," Brinkmann said. "I've seen people I've never seen at games, parents who don't even have kids on the team ... it's been really cool how they've shown up and really supported this team."

"I think I've had a lot harder time controlling my emotions and my nerves than the boys have," Brinkmann said. "We want to approach this like any other game. For a while now, I've left them with two challenges before every game --- Be a teammate: no matter what you do, make sure you're the best teammate you can be. And two, leave it all out on the field.

"This is something every high school baseball player dreams about. These guys are realizing it ... they're really excited to be where they're at right now.

"But at the same time, they're not just happy with getting there, they want to do more."

Who knows? If that one batter, one play or one pitch goes the Hornets' way, they just might.​

third time's a charm vs. Pirates 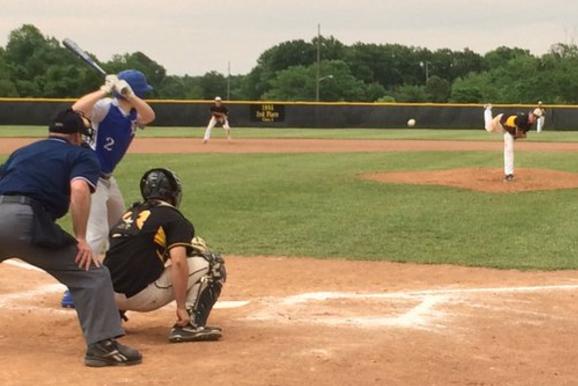