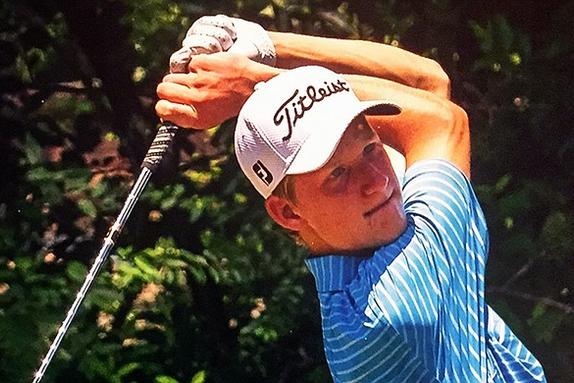 Southern Boone's Walker Kesterson had a round to remember on Wednesday at Eagle Knoll.

HARTSBURG, Mo. --- It's not so much that Walker Kesterson shot a 66 on Wednesday.

If you've played Eagle Knoll, you know. This course is anything but easy. And while 6-under par is eye-poppingly good anywhere, at Eagle Knoll it's professional grade.

Still, it's not even that.

THE ONLY PLAYER TO BREAK 80.

You just don't do that.

Kesterson carded seven birdies and just one bogey to fire a school-record 66 --- which also included a school-record tying 32 for nine holes --- to lead the Eagles to the championship of the 16-team Southern Boone Classic.

On this day, 16 was the magic number, as Kesterson's closest competitor in the 70-player field shot 82.

"Winning by 16, from my experience, is pretty unheard of," Kesterson said. "There were a lot of good players in the field ... it shocked me afterward that there was a 16-shot differential.

"The best club in my bag is normally my driver, but it was the worst club (Wednesday). I didn't hit a lot of fairways, but I kind of kept it in play and hit my irons really well and my putting was solid. That was definitely the difference."

It produced a Ruthian effort.

"You just have to shake your head and say, 'Wow!,' after a round like that," Eagles coach Andy Jahnsen said. "He just really struck the ball well."

The closest competitor to Kesterson --- who's finished third, fourth and T-11 the last three years at the Class 2 state tournament --- was Blair Oaks senior Tanner Elder.

Elder is a splendid player in his own right --- he's the defending Class 2 individual state champion, as he bettered teammate Kory Franks by one shot and Kesterson by five last spring.

Not on this day.

"I'm just really proud of him for what he did, it was a special round," Jahnsen said. "And to do that out there (at Eagle Knoll) is tough."

The field played from the blue tees, the second from the back, which measure about 6,700 yards, and they played the ball down. Besides the 16-shot gap between first and second, only 20 players broke 100.

"It wasn't like we set the course up for people to score, that's pretty obvious," Jahnsen said. "We had some tough pins ... outside the weather being beautiful, conditions were not ideal for a score like that."

Kesterson tied his own school record for nine holes when he shot 32 on the front --- and it could have been, probably should have been, a 31, as he missed a 2-footer for birdie on No. 9.

"I short-sided myself and I didn't want to do anything stupid," said Kesterson, who will take his talents to Southern Miss this fall. "I had some birdie holes coming up, so I hit my chip past the hole .... take your bogey and if I could make a 15-footer, take your par."

He finished with a flurry, making a birdie at the par-3 16th and draining a 17-footer for birdie on the difficult, uphill par-4 18th.

"Playing that stretch (15-18) under par, any day, is pretty good," Kesterson said. "That's the toughest stretch on the course."

He brushed it aside like the rest of the course.

"Walker's been a consistent player for me all four years," Jahnsen said. "He's just a great kid, a class act, and he spends more time on the golf course than probably 90 percent of high school players. It's a job to him and he takes it very seriously.

"He's obviously got some skill sets that will allow him to play at the next level."

He's already taken it to the next level, because what he did Wednesday was simply stunning.