Two goals down, one very big one to go.

Now, they're two wins away from the school's first state baseball championship in 27 years.

Or, to put it another way, the seniors on that team are now 45 years old. So it's been a while.

Who was the shortstop and senior captain on that 1989 team?

His winning days didn't just start when he started coaching Missouri softball. Here's thinking he could use a nice diversion and a big smile right about now.

"It's been a long, long time," Jays coach Brian Ash said. "It's exciting for the city, our fans, the school, our players and coaches ... it's exciting for everyone. I feel we've worked so hard to get here, to finally break through and win a district title, then put two more good games together in the sectionals and quarterfinals, and here we are.

These guys started performing long before the playoffs started. Or before the district tournament. Even before the season started.

Their performing started about the time the fireworks ended last year.

"It's nice to see the kids get the accolades, because they deserve it," said Ash, in his seventh season with the Jays. "The thing that people forget --- and it's not just with our baseball team, it's with all high school sports --- is that they don't see the 6 a.m. workouts four days a week, from July through February, lifting and running and speed conditioning and hitting and throwing ... they don't see that part of it.

"For the kids to put in all that time and go through the grind of it all, to finally have this reward .... for me, that's the most satisfying thing."

Jefferson City has had a good program for 50 years. But the postseason pedigree --- only one state title and two other trips to the Final Four prior to this one --- has not living up to the quality of the program's players, it seems.

"You can draw a really good pitcher, a potential first-round (major league) draft pick, and your season's done. That's what happened to the 2007 team against the Wentzville Holt bunch, having to face the (Tim) Melville kid.

"Jeff City's had a lot of great players and great teams through the years, so this Final Four isn't just for us, it's for all those other guys who came before us and didn't have this opportunity."

Jefferson City, which has won 12 of 13, has made this trek thanks largely to the dynamic duo of senior J.T. Bolhken and junior Jacob Weirich, both lefthanders.

It starts with Weirich, Thursday's probable starter, who's 8-1 with tidy 0.97 ERA.

"When you talk to him," Ash said, "he kind of has that California attitude, he's laid back and low key. But man, you talk about a competitor ... I don't know of a guy who's as competitive as he is."

Maybe it's Bohlken, who's 6-2 with 1.50 ERA. Like Weirich and most of his teammates, Bohlken hates to lose and he knows how to win.

"You're exactly right," Ash said. "Even the guys who aren't playing all the time, they're fierce competitors."

Ash has seen Bohlken grow from a kid to a young man the past four years.

"Coming up as a freshman," Ash said, "he was kind of a middle-of-the-road type kid, but he was baseball savvy. But he physically wasn't there, so to finally see him mature and develop physically, it's given him a lot of confidence this year.

"He's been as good as anybody. Without him, we're not where we're at."

If this were an arms race, the Jays would win. Along with Bohlken and Weirich, the Jays can also utilize seniors Blaine Meyer and Logan Schmitz, or juniors Brandon Williams and Hayden Hirschvogel.

"We've been riding those two guys, but we've got other guys who are very good, capable pitchers," Ash said. "And you never know when their time will come, because you can't count on J.T. and J-Dub throwing a complete game every time out."

Whoever's on the mound ... "We want to score first and then, if we can get to three or four runs, I don't want to say we'll be leading, but we'll be in the game," Ash said.

"We're not a team built for chasing a team and trying to score a bunch of runs in a couple of innings. But we know if we can score first and kind of put the pressure on (the other team), I like our chances."

The defense is solid, anchored by junior shortstop Grant Wood junior catcher Gaven Strobel, while the offense has been dangerous from top to bottom.

Just look at the team's RBI --- no less than seven players are in double digits, ranging from 10 to 22.

"Hopefully, we can continue that," Ash said. "Most teams are pretty stacked 1-4 or 1-5, especially at our level. But when you get down to 6-9, that's where most teams taper off a little bit. But our guys are all very capable, 1-9, and when we can roll the lineup over and have our big RBI guys coming up, it makes life a little easier.

"Our team batting average is only .273, but the last three weeks, I think we're hitting about .330 as a team. Right now, they're all clicking."

"He usually finds a way to get guys in," Ash said of Strobel, who missed two weeks earlier this season with a foot injury. "He's come up with some big hits for us."

It's what the Jays hope to do two more times --- come up big.

"It's been so long since we've been there," Ash said, "it's awesome, it's unbelievable. Hopefully, we can finish the deal off."

There's a whole lot of former Jays --- including a certain group of 45 year-olds --- who would love to see that, too.

The Jefferson City Jays celebrate their 9-1 quarterfinal victory over Nixa last Thursday that secured the school's first trip to the Final Four in 24 years. 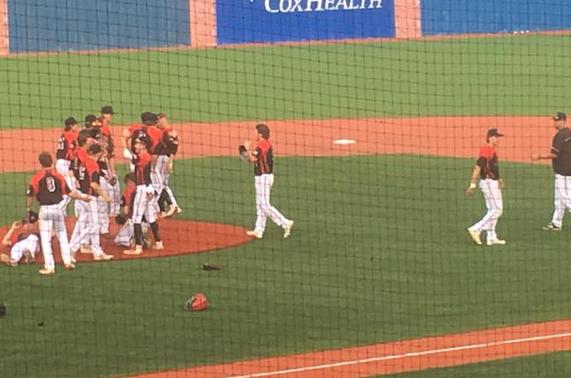