But rest assured, the madness is still alive and well. We've been treated to a healthy dose of May Madness in Central Missouri, as we have no less than four teams still standing in their quest for a state baseball championship.

A portion of this Madness comes from South Callaway, where Mokane Mania has Bulldog Fever running high.

There's nothing quite like winning. And when you are, fans who couldn't find first base are there in force.

"It's been unbelievable," Bulldogs coach Heath Lepper said. "The community is behind our kids in every sport, it doesn't matter if it's baseball, girls softball, football, basketball ... they support us.

"To see these kids and the parents and the grandparents and everyone else so excited about baseball at this time of year, it's a great feeling."

There's a reason the fans are excited and feeling great --- South Callaway has advanced to the Final Four for just the second time in school history, as the sixth-ranked Bulldogs (25-5) get set to battle the third-ranked Summit Christian Eagles (25-2) in the Class 3 semifinals at 7 p.m. Wednesday at CarShield Field in O'Fallon.

"You coach all year to hopefully have your kids experience the Final Four.," said Lepper, in his third season at South Callaway. "These kids don't know what that feeling is like, that's why you coach --- being able to see them do something they've never done before."

Like most sports at South Callaway in recent years, success in baseball is nothing new.

The Bulldogs went 18 years between district titles, before busting through in 2012 on their way to winning the Class 2 state championship. After failing to get out of districts the next two years, the Bulldogs advanced to the quarterfinals last year.

"I couldn't be more proud of the boys," Lepper said. "These kids have been one of the hardest working groups I've ever had the privilege to coach. We (the coaches) always stick around after practice for extra ground balls or extra batting practice, and anytime you have 14 or 15 boys that stay every day, you just can't say enough good things about them.

Last year's dream ended with a wild 15-11 quarterfinal loss to Lutheran St. Charles. There was no such slugfest in the quarterfinal rematch last week, thanks to Kaden Helsel. The sophomore did what he does, pitch well, as his four-hitter led the Bulldogs to a relatively quiet 6-1 victory Thursday in Mokane.

Helsel is the rule on this team, not the exception --- he's young. The normal starting nine includes three freshmen, two sophomores, one junior and three seniors.

"We knew from the beginning we were going to have to have some young kids step up," Lepper said. "And they have."

There are only four seniors on the roster, compared to 10 last year --- seven of which were starters.

"I actually had to ask the boys when were prepping for districts, and just trying to get them to relax a little bit ... 'How many of you guys started last year's first district game?' And I only had two guys raise their hand," Lepper said.

"So anytime you can go from one year to the next, have that type of turnover, and get back to the same spot in the quarterinals --- then go on to win that game --- that says a lot about how much work they've put in this year."

Leading the show is Helsel, who's 9-2 with an ERA of less than 1.50. That's great stuff, but then you consider what he did last year as a freshman --- 6-0 with a ridiculous ERA of 0.21, a season that included a splendid complete-game four-hitter in the Bulldgos' 1-0 sectional win over Palmyra.

Freshmen just don't do that.

"He's already been there and done that," Lepper said, "so it was pretty easy for him to step into a leadership role, even as a sophomore. When you have a kid like that in the lineup, the other kids just naturally gravitate towards that.

"He pitched a lot of big games this year and pitched a lot tougher schedule than he did last year, so to keep his ERA under 2, that's a great season. The first thing that comes to mind is that he's a competitor, he competes on every pitch, whether he's on the mound or in the batter's box.

"You like having those kind of competitors in your lineup."

Batting leadoff, Helsel is the ideal table-setter. While hitting a tidy .390 average (stats don't include postseason), he has one home run, 24 RBI, 23 stolen bases, 34 runs scored, and an on-base percentage of a whopping .523.

"He walks a lot (he's also been hit by a pitch 11 times), he gets a lot of hits and he doesn't strike out very often," Lepper said. "That's a good combination to have for a leadoff hitter.

"Kaden shows up every day and puts in an extra hour, he doesn't rest on what he's done in the past. Then, the other kids feed off that and they put in the extra time.

"It's a good situation to have and it sure makes it fun to coach."

While the Bulldogs' lineup can be dangerous 1-9 --- their 15 home runs are spread among six players --- their top four hitters are especially dynamic.

Batting second is freshman shortstop Peyton Leeper, who's hitting .362 with four homers, 20 RBI and 15 stolen bases. But he also has 13 doubles and seven triples for a staggering .777 slugging percentage.

It's just hard to know which is which.

"I have a hard time saying who's our No. 1 pitcher and who's our No. 2," Lepper said, "because Grayson's throwing really well. He's also a great leader and has a really high baseball IQ."

Batting fourth is sophomore third baseman Dylan Lepper (.372), who boasts another gaudy average for a team with a gaudy average --- .320.

"They battle at the plate and they've been pretty consistent all year," Lepper said. "They're disciplined guys, but we call it disciplined aggression. We like to be aggressive, but we try to stay in the hitter's zone.

"They're smart, intelligent baseball players ... they're a blast to coach."

The Bulldogs have enjoyed the luxury of not leaving Mokane since the district tournament started --- four wins by a combined 26-8.

"It's really been big for the kids, having that homefield advantage and having our fans come out like they have," Lepper said. "It's been a big boost for our kids.

"The support we've had, it's not just because of the kids who are playing now, but maybe they (the fans) have had kids in the past or they have grandkids coming up, but they've all been coming out. That's what you play for and that's what you coach for, to have that kind of support in your community."

Another big crowd was on hand at last Thursday's Class 3 quarterfinal game between Lutheran St. Charles and South Callaway in Mokane. 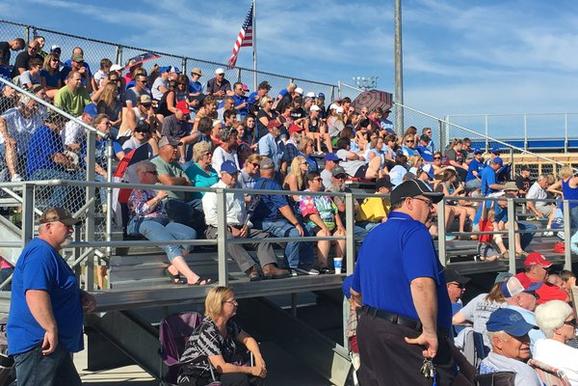