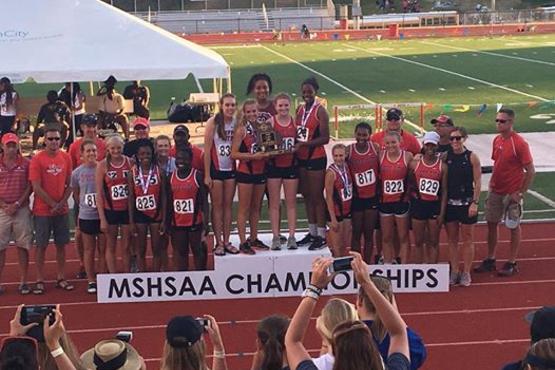 JEFFERSON CITY, Mo. --- This time, they left no doubt.

Because this time, it did not come down to a tenth of a second, an inch, or a lean.

And after Saturday, the number of the day is no longer 1.5.

A year after missing a state trophy by just 1.5 points, the Jefferson City Lady Jays grabbed the hardware with a bang this weekend, finishing with 53 points to secure the Class 5 third-place trophy at the Missouri Track and Field Championships at Adkins Stadium.

"We've been talking all year about 1.5, being 1.5 away from getting one last year," said Jefferson City coach Melvin Myers. "We were standing around last year at the end of the state meet and wondering if we were going to get there, because we knew it was really close.

"But it didn't work out that way. This year, they stepped up. I'm proud of them."

"Since Day One of practice this year and walking down that hill (from the locker room to the track), when we knew we were going to host the state meet ... to getting as many kids as we could here and walking day that hill the last day and seeing what would happen, this was our goal.

The Lady Jays didn't do it with one superstar, they did it with waves of balance. They had no individual state championships and only two second-place finishers, but they had 10 top-six finishes.

"We had a really talented team this year and everybody did their part," said senior Haley Watson, who finished third in the 300 hurdles. "It feels incredible. All of us had our sights set on doing something more than we did last year ... we were just 1.5 points away.

"All season, that's became our catch phrase, 1.5. This year, it just feels awesome that we were able to clinch that and get third."

Senior Alexis Roberson led the charge by scoring 14 points by finishing second in the shot put and third in the discus.

"I know she was a little disappointed with what she did, but I'm proud of her ... she did an excellent job," Myers said. "We'll miss her, she's been wonderful to have here the last four years."

Also scoring points for the Lady Jays were:

* Junior Rachel Holt, who was second in the pole vault --- and it was her vault that clinched the third-place trophy late Saturday afternoon.

"The whole time I was thinking that this was my last lap around Licklider Track," Watson said.  "I just wanted to make it count. You do what you've trained for all winter and all season."

Licklider Track at Adkins Stadium ... Myers has roots with both men. Dennis Licklider built a dynasty in track and field in Jefferson City, which you probably knew.

And Pete Adkins, well, you probably know what he did, too.

Myers played for Adkins, while he both ran sprints for Licklider in the 1990s and was also able to coach with the Hall of Famer.

This was the first trophy for the Lady Jays since 2008, when the Jefferson City won the last of a staggering four straight state championships under the direction of Licklider.

What did Myers learn from Licklider? A lot.

"The sense of working hard and pushing yourself beyond where you think you can go, that's how you get the great stuff," Myers said. "Trust in the coaches' plan --- that's what I got from here from getting to run for him and getting to work with him --- to get the most out of your athletes.

"And it's not about you, it's about the program, and our kids are buying into that."

So far, so good for Myers, who's in his second year as head coach, but has a wealth of experience to lean on with his assistant coaches.

"I'm really proud our both our girls and boys (the Jays tied for 11th)," Myers said. "They competed well this weekend and had a lot of PRs (personal records), and that's all you can ask, to be your best at the state meet."

And with only six of the Lady Jays' 17 state qualifiers graduated, the best may be yet to come.

The number of day is no longer 1.5