(This story was first posted Dec. 18, 2014, about the life of Bonnie Rodgers, who passed away early Friday morning at the age of 99. She would have celebrated her 100th birthday on June 17.)

Although it's been said many times, many ways

Merry Christmas to you.

Did you find yourself singing along? Humming, at least?

"The Christmas Song" is one of the best songs in a season full of great songs. You may know it as "Chestnuts Roasting on an Open Fire," but it doesn't really matter.

A great song, by any other name, would sound just as sweet.

While I've always loved it, I've also always wondered: What if you were 93 or older? Don't you get Merry Christmas wishes, too?

That always made me a bit sad, picturing a 95 year-old sitting in her rocking chair, wrapped in a blanket in a lonely, mostly dark room decorated by a small, fake tree, a few lights flickering, listening to that song ... with a solitary tear running down her cheek.

Of all holidays, and much more than any other, Christmas is for kids of all ages.

Well, shed no tears for Bonnie Rodgers. At age 98 --- and like most things in her life --- lyrics to a song don't faze her in the least. She even likes the the song.

"No, it doesn't bother me," Bonnie said a smile. "The years just come and go and I don't even think about it. Sometimes, I can't even remember how old I am."

Sure, Bonnie occasionally forget things. Who doesn't? And she'll tell some stories more than once, sometimes more than twice, but that's okay, too.They're worth hearing.

She has a quick, warm smile and an infectious giggle and laugh that can light up the darkest room. Her age doesn't matter, she's still a kid at heart.

But what's the secret to her longevity? More on that to come.

BORN IN KANSAS, BONNIE was the third of four children of George and Nellie Reuling. She had two older brothers and one younger sister, who have all passed away. When Bonnie was young, the family "moved" to Nebraska ---a whopping nine-mile move, from the tip of northeast Kansas to the tip of southeast Nebraska.

"Nebraska was closer to our bank and the little grocery store we went to," she said.

She grew up on a 160-acre farm and Bonnie's father owned a rare commodity --- a threshing machine, which made him a very popular man in the 1920s.

"He did the threshing for everybody in a one-hundred mile area," she said.

When she was nine, her mother got sick, so Bonnie had to grow up fast. "I had to start doing all the cooking and everything. I remember scrubbing those floors and dad would come in with his shoes full of mud and tromp through the house.

"I said to him: 'Take your shoes off at the door!' I was doing all the work. He looked up at me, real shocked at first, because he could have a temper. But then he smiled and took off his shoes."

Like everyone else in the nation at the time, Bonnie and her family struggled through the depression.

"It was bad. I did all kind of work for 50 cents a day. We lost our farm ... there weren't many farms left, except for a few people who were rich enough to buy the farms.

Which is not to say there weren't some great memories, including one particular Christmas memory.

"We always got a great big tree and put it in the window," Bonnie said. "We had a living room and dining room with great big curtains, so we put the tree and all the presents in there. But we couldn't go in there, the curtains were closed, so we'd get on our bicycles and ride around on the outside so we could see the presents."

IN THE 1930s, BONNIE --- who'd become quite the dancer during her weekly Saturday night excursions --- met and eventually married her husband for the next 40-plus years, Robert.

"He had the best physique you ever saw, but he couldn't dance," she said. "His feet just didn't go along with it."

They moved to Kansas City, Kan, and had one child, Karen. Karen, now 65, was adopted because Bonnie couldn't have children.

"She isn't bad for one child getting everything she wanted," Bonnie said with a giggle. "If she didn't get it from me, she'd get it from her dad."

She certainly got her dresses from mom. "She had lots of pretty dresses and I sewed all of them," Bonnie said proudly. "She liked them better than the bought ones.

"She'd bring home a catalog and show me a picture of what she wanted, then we'd go out find a pattern that was as close as we could get to it."

As it turned out, the dresses weren't just a "little girl" phase.

That would be that.

"I've been very lucky with the parents I had, the husband I had, and then I had the most beautiful daughter," Bonnie said. "It's the total love between us; I don't think either one of us has ever been mad at each other."

The Life of Bonnie is certainly a case of quality over quantity, as it's just the two of them and Karen's husband (Bonnie moved to Jefferson City in 1979 to join them when she retired) to celebrate the holidays as a "family." Bonnie has no grandchildren.

But that's okay. She still has an unblinking spirit and she's still going strong. At the same time ...

"Christmas isn't nearly as exciting as it used to be," said Bonnie, who's been a resident of Adams Street Nursing Home since March. "But we still get together and have a party with our family, our friends and have a few drinks."

and cranberry juice cocktail. Just one.

"We just have a blessed time together," Bonnie said. "She's all I need, she's my whole treasure in life."

Bonnie is certainly a treasure in her own right. But why are we telling her story? Because it's a story worth telling, everyone and every life has one. Chances are, you have a Bonnie in your life.

It doesn't matter her age, there's still plenty of little girl in Bonnie. Still, couldn't the song have said: "To kids from one to 102." The song's rhythm and syntax would still work just fine, wouldn't it?

Well, you probably won't live to 98 if you're concerned about such matters. Bonnie's life is full of smiles and laughs, good times remembered, bad ones forgotten, savoring those afternoon visits with her daughter ... and one tasty cocktail a day.

Merry Christmas, to kids of all ages.​ 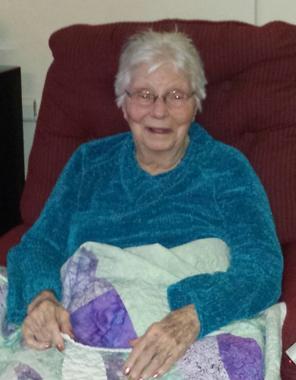 The life of Bonnie Rodgers was full of smiles and laughs, good times remembered, bad ones forgotten, savoring those afternoon visits with her daughter, Karen ... and one tasty cocktail a day.

The wonderful life of Bonnie