Sylvester Williams poses with one of his young campers after Saturday's free youth football clinic at Adkins Stadium.

Now with the Titans, 'blessed'

Williams continues to give back 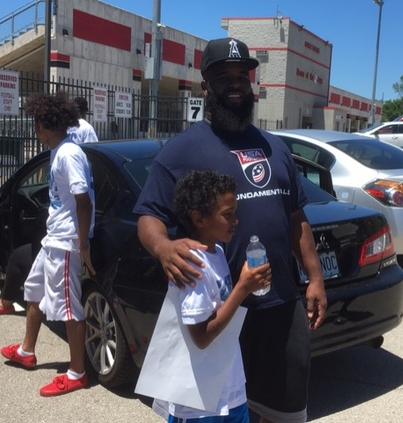 He returned Saturday as part of a team that hasn't made the playoffs in nine years ... it hasn't won a playoff game in 14 years.

Remember the Titans? Because they've certainly been easy to forget.

Williams --- a 2008 graduate of Jefferson City High School --- signed a three-year deal with Tennessee in March, leaving the Denver Broncos after four solid seasons that included the Super Bowl championship season in 2015-16.

You would think that going from a perennial winner to a perennial loser would stunt Williams' infectious smile. Not so. He's blushing with optimism.

"I came from a winning organization and I feel like I'm going to a team that's had some bad luck the past years," said Williams, who was at Adkins Stadium on Saturday to host a free youth football camp. "But I think it's definitely a team that's looking at bigger and better things. I think this is going to be a big year for us ... we're going to continue to take steps and move forward.

"It was definitely a tough decision. Honestly, I really wanted to stay in Denver, but it came down to what's best for my family."

"I had a chance to play against them last year (a 13-10 Tennessee win) and I know what type of team they are," he said. "They're a very physical team and any time you're a physical team that can run the ball, you have a chance to win."

A first-round pick of Denver in 2013, Williams, 28, played in 60 games with the Broncos, starting 48, and has 94 tackles and six sacks in his career. The deal with the Titans is reported to be worth $17.5, which includes a $3 million signing bonus and $9.5 million of guaranteed money.

Certainly, that was more than the Broncos offered, but this move was about more than just money.

"Being close to home was definitely a great opportunity for me and my family," Williams said, "so I took advantage of it."

Saturday's free youth camp, the second Williams has hosted in Jefferson City, drew more than 120 youngsters from ages 9-16. The theme? It was all about FUNdamentals.

Williams was assisted by several volunteers, including former Jays and Arkansas Razorbacks running back Kody Walker. Obviously, you can't do much in four hours, but it's something Williams wants to continue.

"It's something I look forward to every year and I'm looking forward to it growing every year," Williams said. "I want to continue to do more and more for this city."

It's truly something Williams has gotten to this point in life ... his journey, his story is simply amazing.

He didn't play organized football until his senior year in high school and despite his size advantage, he played sparingly for the Jays. He credits his mentor, Andrea' Salmon, for keeping him on the right path in life, and Williams went on to become a JUCO All-America at Coffeyville Community College in Kansas.

He transferred to North Carolina where he became an All-America for the Tar Heels, and the rest is history.

"I've been blessed in so many ways ... to me, it's all about giving back and helping the next person," Williams said. "That's why I try to talk to as many kids as I can and instill my story in them, because at the end of the day, I think it just takes that one person to let you know it's not the end of the world if you go through a few bumps in life.

No matter what team he plays for, Sylvester Williams is a champion, don't you agree?