JEFFERSON CITY, Mo. --- It's become one of our rites of the season.

Playing bad golf for good a cause.

All these charity tournaments --- be it for the Red Cross, the Cancer Society, Big Brothers/Big Sisters, or any other --- benefit very worthy causes. This isn't a wad of cash being dumped into Uncle Joe's Las Vegas Slush Fund.

You would think we've reached the saturation point, as most area courses are filled to the rim with these events. But one more has made its way onto the circuit and, like the others, it's a great endeavor.

And even though the Capital City CASA (Court Appointed Special Advocates) Tournament is in its first year, there were no growing pains. Hardly, as a field of 32 teams will take part in the four-person scramble Monday at Jefferson City Country Club.

Bill Deeken --- Vice President and Fundraising Co-Chair for the local CASA --- held over 20 of these tournaments during his days in office.

"I told them that it wasn't easy to run a tournament," he said, "but we could try. There are so many tournaments out there, you could play in one about every day if you wanted to. I told them, 'Don't expect anything big your first year, you've got to build up to it.'

After early returns, they thought they'd have about 80 players (20 teams), which would have raised about $14,000 after expenses --- and those expenses can certainly add up.

Then, Capital City CASA President Kathy Farmer stepped in and said: "'That's kind of embarrassing, we can do better than that,'" Deeken said.

"Kathy's done a great job, we have a tremendous board members, and a tremendous community," Deeken said. "We've had so many people who've wanted to help us out ... everything's fallen into place.

"I wasn't expecting this, but I'm just thrilled."

Monday's tournament is in being held in conjunction with the Mid-Missouri Young Lawyers Association. They help with CASA's mission, which is to train and support volunteers to be advocates for abused and neglected children, in this case, for those children in Cole County.

Also on the Capital City CASA webpage, it says the organization is "... based on the belief that all children are entitled to a safe and permanent home. The mission will be accomplished through trained volunteers in cooperation with the courts, key agencies, legal counsel and community resources."

Executive Director of the local chapter, Dr. Jim Kellerman, teaches the advocates during a 10-week (four hours a week) session. These folks will then help the children who've been taken away from their parents for whatever reason, be it drug abuse, physical abuse or neglect.

"These kids get stuck in the system and that's it," Deeken said. "They didn't ask to be brought into this world and they sure didn't ask to be treated like this. The advocate takes these children --- it could be one or it could be four or five --- and they see them at least once a week, maybe more. Then when it's time to go to court, the advocate goes to court with them so they don't have to go by themselves, because mom or dad is probably in jail.

"It helps give kids a chance to be kids again, to be loved, to have somebody take you someplace, and have somebody in their lives they can look up to."

Another great cause, indeed. Donations are welcome, as there are currently over 120 children in Cole County, Deeken said, who are going without CASA's help. To see how you can help, go to http://capitalcitycasa.org/

"Any donations," Deeken said, "would really be appreciated. It would be fantastic, because these kids deserve our help."

for even greater area causes

The par 3 eighth hole at Jefferson City Country Club, which will serve as host for inaugural Capital City CASA Tournament on Monday. 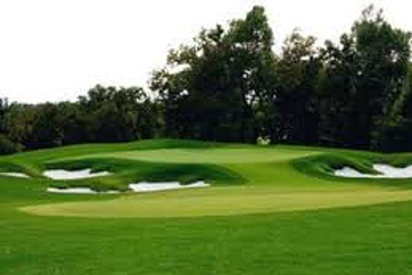