Because you just never know.

It's really not over 'til it's over, is it? For while the Vienna Eagles were certainly down Thursday, they obviously were not out.

These Eagles were Phoenix.

After being knocked into a 4-0 hole after one inning and trailing through the first six innings, Vienna rallied for four runs in the top of the seventh to shock the New Bloomfield Wildcats 7-6 in the championship game of the Class 2 District 8 Tournament at Rod Haley Field.

This comeback for the ages also ended a postseason drought for the ages, as it's the first district title for Vienna since 1984.

"It feels awesome, I'm just so proud of our kids," fourth-year Eagles coach Tyler Shalbot said. "We've been resilient ... we've been coming back for wins like this the last six games and we just keep doing it.

"Until the final out's made, we just keep battling."

Games like this give you the highest-high in sports.

"This is the most memorable thing, ever," said Vienna senior Dakota Hollis, who started the seventh-inning rally with a leadoff single. "I'll remember this for the rest of my life, it's just crazy."

"This is going to sting for a while, especially the way we lost it," Wildcats coach Justin Forsythe said. "We gave it to them, they took a freebie. They did not earn that win, we gave it to them ... we made some crucial mistakes that we haven't made in a while.

Yes, the top-seeded Wildcats (17-7) certainly helped the cause with two critical errors in the seventh, including one on a tailor made double play ball. But after the door was slightly opened, the third-seeded Eagles (17-8) busted it down.

The tying run came home after a solid single by Tanner Helton, before a two-out, RBI single by freshman McCrae Fuller capped the four-run rally to give Vienna the 7-6 lead.

The Eagles then gave the ball to their bull --- junior righthander Ethan Bull --- to finish it. And he did, with the game-ender coming on a lazy fly to center after he'd fanned the first two to start the frame.

Bull was one of the biggest stories of this game --- just as big as the seventh-inning rally, perhaps.

The Wildcats knocked out Hollis, the Vienna starter, after just one-third of an inning and with New Bloomfield already leading, 4-0. Bull came on and stopped that rally, then pitched the rest of the way to not only keep the Eagles in it, but eventually win it.

"He was unbelievable," Shalbot said of Bull, who scattered seven hits in 6 2/3 innings. "He threw a lot of breaking balls and did a great job of keeping them off balance, he got ahead in counts, and he pitched around their tough hitters. I couldn't be prouder of him."

Hollis --- who walked three, gave up three hits and retired only one batter --- was Bull's biggest fan.

"I wasn't feeling it," Hollis said, "but I'm glad coach put Bull in, because he took care of it. It was awesome for him to come in and do what he did. He was outstanding."

New Bloomfield junior Zach Burton, who finished with three hits and three RBI, drove home the game's first run with an infield single. Nick Hammann, who had two hits, followed with a two-run single and Tommy Bedsworth added an RBI single to make it 4-0.

Vienna --- which won just the third district baseball championship in school history --- got back in it with three runs in the fourth, with RBI going to Logan Agan, Bull and Gavin Stricklan. But then in the bottom of the sixth, Burton's two-out, two-run single made it 6-3, and seemingly provided the cushion to put this one away.

But this one did not go away quietly. Hardly.

This sure didn't seem likely, however, and the 32-year wait seemed destined to be extended to 33 years. But then ...

"We had the top of the order coming up, we had four seniors up, and they just keep getting the job done," said Shalbot, whose team will host Warsaw (13-6) in the sectionals Monday. "They believe."

So did the Wildcats, who entered this season with big aspirations after finishing second in the state last year.

"We have a successful group of boys here that took second in the state last year," Forsythe said, "and we really felt like we had a team that could do it again make that run again. I feel bad for those guys who had an ultimate goal they wanted to get to, but it ended today. 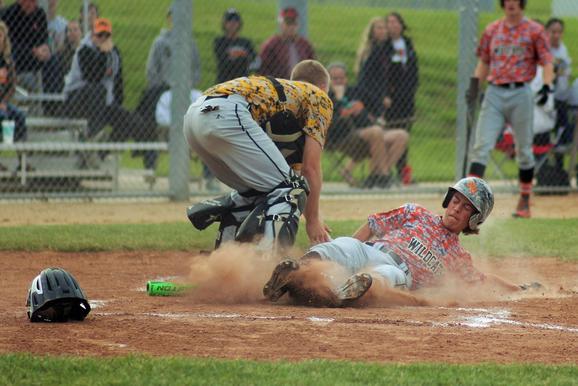