Pete and Lorraine Adkins with John Pelzer in December, 2013. 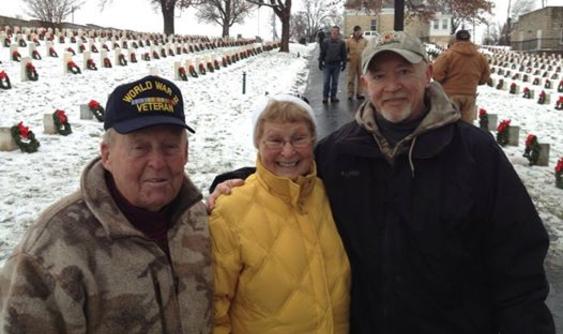 JEFFERSON CITY, Mo. --- It's been one month since Lorraine Adkins passed away.

As you can imagine, it's been a very difficult month for her husband of 68 years and best friend for even longer, Pete.

Pete Adkins fought back tears several times during our conversation Thursday afternoon as we spoke about Lorraine, who died April 5 at the age of 88.

To say Pete's doing well would be an overstatement, but he's "getting by."

"It just seems like, you know ... ," he said, his voice trailing off. "You have to stay busy, I've found out. I'm just trying to find things to do to occupy the time, first one thing then another."

Pete's been keeping busy by working around his yard and home, watching baseball --- always the Cardinals, but he also attended the Jefferson City Jays' home game with Rock Bridge on Tuesday --- and twice going turkey hunting. He thought it would be more, but he wasn't up to it.

"I think I'm going to go," he said, "then I (mess) around and don't have the fire to get up at 4 o'clock in the morning and go. Maybe next year I'll feel more like going, we'll see."

Last weekend wasn't a good one for Pete, the longtime, legendary and nationally-renowned head football coach of the Jays.

"With all that rain, it was a miserable weekend," he said. "There wasn't much to do and it got pretty long ... I got pretty down."

Lorraine was diagnosed with Stage 4 pancreatic cancer --- a very painful cancer, not that any are pain free --- just a month before she died.

"She got bad so fast," Pete said. "We couldn't get an appointment down at Barnes Hospital (in St. Louis) until the next week and by the time we got ready to go, she was so weak she couldn't go.

"She went awfully fast. It was good in a way, I guess, the way it turned out. Maybe that was best ... if there is a best."

There's really nothing good that comes out of an experience like this, but at the very least, Pete hasn't been alone very often. His numerous friends and great support system have been both a blessing and a boost during these difficult days.

"They've helped a lot," he said. "I usually get three, five, six calls a day and that helps."

His biggest help through this process has been his son, Terry. Terry spent 2 1/2 weeks with his dad, starting shortly before Lorraine passed away, and will be back to spend time with Pete on Friday. They plan to spend a long weekend at the Lake of the Ozarks, before Terry returns home to Oregon on Tuesday.

"That will be good," Pete said.

Crappie fishing is in the forecast for the two, but catching them might be another thing.

"With all this high water," Pete said, "it's probably got that Lake so (messed) up, it won't be worth anything. But at least we'll get out."

At some point in our lives, we'll all have to deal with this ultimate heartache. But that's of little comfort to those going through it, especially if your heartache has roots going back seven decades.

"Two years of dating and 68 years of marriage, that's a long time," Pete said. "I'd like to do it all over again."

A month after passing of Lorraine,
Pete Adkins says he's 'getting by'