JEFFERSON CITY, Mo. --- Pete. Around here, you only need the first name.

They became the First Couple of Jefferson City, more so than any governor and his wife. There were certainly others with more wealth and influence, but this was Pete and Lorraine's town.

Wednesday was a sad day for all of us in Central Missouri --- as well as around the country for those lives touched by Lorraine Adkins --- as the matriarch of this power couple passed away quietly at her home, with Pete and their son, Terry, by her side.

Of course, Pete was by her side. This great love story wouldn't have ended any other way.

They say that behind every great man is a great woman, and Lorraine was certainly that. Great. And for a long time, Lorraine, who would have been 89 in June, would probably be considered the woman behind Pete.

But really, and especially in the last three-plus decades, that wasn't the case. Not at all. Lorraine wasn't behind Pete, she was by his side. They were arm in arm and holding hands, joined at the hip, with matching proud jaws, her wearing a smile to complement what was usually his lack of one.

Together, they experienced life's highest highs and lowest lows. They were best friends and soul mates, married for nearly 70 years. They were confidants and companions, but companions who would turn into a pit bull if the other was under attack.

Usually, it was Lorraine who would do the defending, because Pete did ruffle some feathers along the way. Why? Because he was old school and tough on his players? Maybe. But mostly, it was because he won so much, unlike almost any coach in the history of football --- at any level.

Detractors just didn't get Pete, who's certainly mellowed through the years. Even going back to those early years with the Jefferson City Jays, however, if you knew him, you liked him.

To this day, his former players would run through the proverbial brick wall for Pete. And when they were done with it, it would look like the proverbial wall of Swiss cheese.

But it sure became easy to dislike the man behind it if you were on the outside looking in.

We mention this because it provides context and perspective for this relationship. Pete and Lorraine grew closer and closer as the dynasty bloomed. They circled the wagons because of Pete's success on the field, and the circle became even tighter because of the heartbreak off it.

If you dared say anything bad about Pete, be it about football or otherwise, Lorraine would be there to stand by her man and defend him to the end.

You don't know what you're talking about!

And the thing is, they didn't.

Lorraine was both sweet and tough. If you needed to get something done, Lorraine was the one to call. She would get it done, using both her sweetness and toughness, whichever was required.

While she worked as a realtor for many years, she was a philanthropist at heart and would do anything in her power to help the cause. And Lorraine had power. She was a pillar of the Cole County Historical Society, but her No. 1 philanthropic passion was veterans.

Lorraine was dubbed the "First Lady of Patriotism" --- she was on the ground floor of Operation Bugle Boy back in 2001, she was a driving force behind Operation Tyler to build a handicapped-friendly $350,000 home for a badly wounded local Marine in 2011, and she was the founder and director of Wreaths for Heroes.

To be sure, Lorraine wasn't the only accomplished member of the Adkins' household ... although Pete, a World War II veteran himself, was by her side in these projects.

Pete ... everybody knew his name. And at the height of his athletic power, that was the case throughout Missouri, not just around here. And even in many spots around the nation.

He had a lot a great assistants who helped make this success possible, guys like Jankowski and Cole, Licklider and Johnson, Grosso and Obermiller. But none of them were remotely close to Pete's No. 1 assistant, the one by his side every step of the way, arm in arm, hand in hand.

Lorraine ... thank you for everything.

You will be greatly missed. 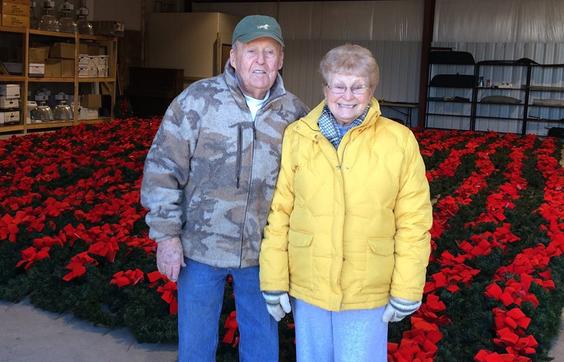 The Adkins were both huge contributors for veterans causes, including Wreaths for Heroes each Christmas --- a cause started by Lorraine.

With the passing of Lorraine,

our town has lost its matriarch