JEFFERSON CITY, Mo. --- You see coaches do it in basketball with some degree of frequency, taking out every starter with one sweeping move.

If you forgot where it is, here's the bench.

Coaching kids and young men can be a frustrating endeavor, as you probably know.

But a benching a team in baseball?

Yes, indeed, it did happen on April's Fool Day, but it was no joke.

Between the fourth and fifth innings of Saturday's game, Helias coach Chris Wyrick pulled nearly every starter --- all but one position player was sent to the bench --- during the Fatima Comets' 4-2 win over the Crusaders to wrap up a tripleheader of baseball at the Legion Complex.

"If they're not going to work and try to compete for it, then I'm going to find someone who is --- guys who want to compete for their teammates, not just for themselves."

The Crusaders, who were ranked No. 5 in the Class 4 preseason, had only one hit and two baserunners through four innings against starter and winner Logan Bexten. They seemed well on their way to being shut out for the third time in four games.

Wyrick had seen enough. Not necessarily from this game --- even though it was Helias' second loss to Fatima in 11 days --- and not even from the team's 1-3 start.

He's been seeing it since the start of practice, weeks before the season even started.

"I saw it all preseason and in our first four games," Wyrick said. "If you don't do the little things right and play smart, then you're not going to beat anybody. And you're really not going to beat good teams."

Did Wyrick see this coming before the season started? We'll stick with the one-word answer.

"You never see this kind of thing coming," he said. "You always assume your kids are going to figure it out and we're going to get to where we need to be. And we're just not there."

The Comets (7-1), however, seem to be. Saturday's conversation starts with Bexten, who didn't allow an earned run and finished with a five-hitter, he struck out six and walked one, and retired the side in order four times --- including each of the first three innings.

"Logan Bexten was dealing," Comets coach Scott Kilgore said. "I mean wow, what an outing ... and he did it in under 100 pitches. He just looked sharp.

"He really didn't have too many hiccups, he just stayed in the strike zone, didn't let anything affect him and stayed focus. That's all you can ask from your pitcher."

Fatima scored on a two-out, RBI single by Jonathon Backues in the first inning, made it 2-0 on a run-scoring double by Steven Brandt in the third, and had a run balked home in the fourth.

The lead, however, could have been bigger and their final run-total could have been a lot bigger. But the Comets stranded 12 runners --- including two each in the first, third, fourth and sixth innings, and the bases loaded in the seven.

"That's kind of been one of our nemesis, we've left a lot of runners stranded this year," Kilgore said. "That's something to improve on."

It was 3-0 heading into the fifth when Wyrick made the move. A move like this takes a lot longer than emptying the bench in basketball, and it resulted in a lengthy pow-wow with the umpire before the new-look Crusaders took the field.

"I have no comment about that," he said. "I just worry about the Royal Blue, not the Navy Blue."

Trailing 3-0 heading to the bottom of the sixth, Helias scratched across two runs. One scored on a single by Alex Buschjost, who was the lone position player to stay in the game (although he did move from left field to catcher) and a sacrifice fly by Nick Brandt.

Other hits in the frame were a double by Brandon Ferguson and a single by Zach Davidson.

"I think Davidson put a good, low, outside curve ball in play with two strikes and got a hit out of it," Wyrick said, "instead of taking a called third strike right down the middle, or even taking one on the outside corner and not competing and fighting it off. Those things add up.

"That was the difference between scoring two runs and not scoring any runs. We got one hit in four innings, then four hits (actually three) in one inning. That's the difference."

Fatima added an unearned run in the seventh --- "To come back and scratch one across late in the game, that's always good," Kilgore said --- before Bexten retired the side in order in the bottom of the frame to finish it, as the Comets beat the Crusaders for the second time in this young season.

"That's a great accomplishment, it's a good feather in our cap," Kilgore said. "But we've still got a lot to accomplish. This is a good squad, they play hard, as you just saw, and they don't let anything really get them down. That's always a positive when you have a team that can do that.

"It's still early yet, but we're playing good baseball. Hopefully, we can keep it up."

Tyler Cassmeyer gave up three runs (two earned) on six hits in five innings to take the loss for Helias, which opened the day by throttling Kansas City O'Hara 11-1 in five innings.

Fatima also blasted baseball-challenged O'Hara in five innings, 17-7, which begs the question --- What do you get out of playing a team like that?

"Honestly," Kilgore said, "not much."

The bigger question on this day would be if the Crusaders got anything out of Wyrick's message.

"I don't know, we won't know until our next practice and our next game," said Wyrick, in his 18th season at the Helias helm. "If they come out and keep doing the same things over and over that got them pulled, then they don't realize what the message was and what we're trying to tell them. 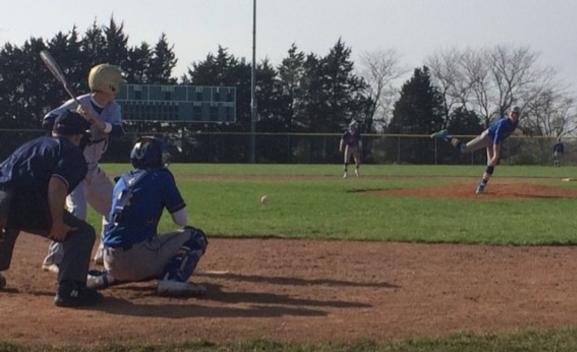 Fatima senior Logan Bexten fires a pitch during the sixth inning of Saturday's game with Helias at the Legion Complex. Bexten tossed a five-hitter and didn't allow an earned run as the Comets beat the Crusaders 4-2.

in Crusaders' 4-2 loss to Comets