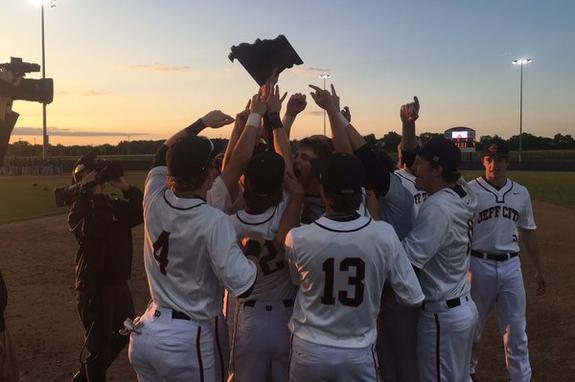 As the sun set on the Rock Bridge season, the Jefferson City Jays celebrated the school's first district baseball championship since 2007 on Wednesday at Battle.

COLUMBIA, Mo. --- This wasn't a monkey off their back, this was the entire zoo.

Oh, what a relief it is.

The Jefferson City Jays hadn't enjoyed this feeling since Barack Obama was more than a year removed from even winning his party's nomination.

And when Steph Curry was in his second year --- at Davidson.

Jacob Weirich tossed a five-hitter and also collected three hits as the Jays knocked off the Rock Bridge Bruins 6-1 on Wednesday in the Class 5 District 9 Championship game at Battle, earning Jefferson City its first district title since 2007.

"It's been a long time, way too long," Jays coach Brian Ash said. "I'm happy for the seniors --- I'm happy for all our players --- and I'm really happy for the former players who didn't get the opportunity to feel this. Those are the guys we were playing for, so it feels great."

For a program with such a solid baseball history, waiting nine years between postseason berths is a long time, indeed. You have to go back to the stretch from 1960-78 to find a longer one for the Jays, who put together an amazing run of eight straight district titles --- eight of the school's now 18 district titles --- in the 1990s.

"We've had some really good teams, but we just couldn't get over the hump," Ash said. "The crazy thing is, this is probably the toughest this district has been since I've been here (seven years)."

But the Jays were the toughest of all, thanks to a pair of splendid, complete-game pitching efforts by Weirich, a junior, on Wednesday and a four-hitter by senior J.T. Bohlken in Tuesday's 1-0 semifinal win over eighth-ranked Sedalia.

"They were great, they've been great all year," Ash said of the dynamic duo of lefthanders. "And we've got some other guys who are pretty dang good, too. Once you get in the playoffs, you can get through with two really good starters --- I'll take my chances with those two,any day --- but you have to have some guys who can come in relief, if need be."

Speaking of relief, the second-seeded and fifth-ranked Jays (25-6) got some before the second-ranked and top-seeded Bruins (26-8) came to the plate.

Jefferson City sent eight men to the dish in the top of the first and took a 2-0 lead on an RBI double by Gaven Strobel and a run-scoring single by Kory Franks, who finished with two hits and two RBI.

"Those runs were huge, that set the tone for the rest of the game," Ash said. "Especially when you have a guy like Jacob on the mound, that takes a lot of the pressure off."

Weirich, who walked three and struck out eight, got some help.

In the bottom of the third, the Bruins loaded the bases with one out. And wouldn't you know it, up came the guy who really likes to bat with the bases loaded --- Cole Evans ended Tuesday's semifinal game with a walk-off grand slam.

But this time, Evans grounded into a 4-6-3 double play --- Garrett Durbin to Grant Wood to Hayden Hirschvogel --- as Weirich and the Jays escaped unharmed.

"That was the play of the game," Ash said. "If he gets a base hit, it's probably a different ball game."

The Jays made it 3-0 in the fifth on a sacrifice fly by Franks, before the Bruins got back within two in the bottom of the frame, the run scoring on a passed ball.

There was one final dose of relief in the seventh, when the Jays put it away with three runs.

"For us to tack on those additional runs," Ash said, "it allowed us to kind of take a deep breath. That really helped take some of the pressure off. We had some guys step up, that's the bottom line."

While Weirich banged out three hits, including a double, and had one RBI --- "He can hit, too, not just pitch," Ash said --- Bohlken and Wood joined Franks with two hits apiece in the 13-hit attack for the winners, while Tyler Bise had a double and an RBI.

For Ash, this may not seem like the biggest win of his coaching career, considering he won two state championships at Blair Oaks. Then again ...

"This one feels as good, if not better, to get it done on this stage," he said. "Rock Bridge (which had ousted Jefferson City in the district finals the previous two years) has set the standard, they were the team to beat. But our guys showed up tonight and played very well."

The Jays will play at the District 10 champion next Tuesday. That district's semifinal and championship games are scheduled to be played Thursday at Willard.

But with this one behind them, the Jays can now turn their attention to breaking another long playoff drought --- advancing to the Final Four for the first time in 24 years.

"We'll enjoy this for about 24 hours," Ash said, "then we'll back to work. It feels great to be able to say that."