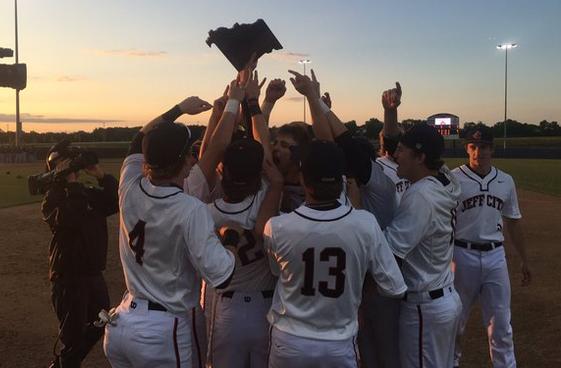 JEFFERSON CITY, Mo. --- As soon as the ball dropped into the glove of the Francis Howell left fielder for the game's final out, the dream was over.

But another one was born.

While last year's fabulous run by the Jefferson City Jays ended one win short of a state championship with that loss to Francis Howell, it's only served as fuel for this year.

"It lit a fire," Jays coach Brian Ash said. "They know they're capable of getting back there, but they also know they have to continue to do those little things to get us to the top.

"These guys are a pretty confident group ... they don't show a lot of urgency, at times, which as a coach can drive you nuts. As a coach, we want you to start from pitch one, but they're so confident in their abilities.

That's a mouthful of success. So it's really no surprise that the Jays, with nine returning seniors, were ranked No. 1 in this year's preseason poll.

"But when you have the No. 1 on your back, the target's even bigger. We tell the kids not to worry about it and just control the things you can control.

"We're using the motto that (Clemson football coach) Dabo Swinney used --- embrace it, run towards it and let's see where we stand at the end."

CERTAINLY, A LOT CAN HAPPEN between the beginning and the end. Last year, Francis Howell was preseason No. 1, but eventually dropped out of the Top 10 after struggling through a six-game losing streak.

Baseball happens. But you saw where Francis Howell ended up.

"You can lose a game and still play pretty darn well, if you run into a buzzsaw," Ash said, "so we're probably going to lose some more games along the way. Baseball's just different, the kids understand that."

The Jays are 4-1 in the early going heading into Friday's 6:45 p.m. game against Helias at the Legion Complex. (Start time is tentative, as the JV game will start at 5 p.m.)

Look for Ash to hand the ball to senior lefthander Jacob Weirich. To say Weirich (better known as J-Dub) is the ace of the staff would be an understatement --- he's the whole deck of cards.

"Obviously, with any kid, he's gotten a little bigger and stronger," said Ash, in his eighth season with the Jays and 17th overall. "He's turned into a young man, he's not that baby-faced kid anymore.

"The maturity level and strength he's gained has obviously helped. But for him, his mechanics have always been really, really good."

Weirich's fastball has picked up about six mph since last year, and he's now throwing consistently in the mid- to upper-80s. He throws two different fastballs, both move dramatically, to go along with his curve, and he's starting to incorporate a change-up into his regular mix.

"He's already tough to hit," Ash said, "and if he gets his change-up going, it's dang near impossible."

Barring something unforeseen, Weirich --- an All-State hurler who's signed with Southern Miss --- will break the school record for career wins. He entered the season at 16 and he's now at 18, leaving him just three wins shy of the mark set by Steve Aldridge from 1987-90.

"He's a very carefree kid, he likes to have fun," Ash said.

Which is not to say he lacks intensity.

"He can be throwing a bullpen and it's almost like he's getting ready to pitch to the last batter in the state championship game," Ash said. "He's locked in and he's focused ... it's really fun to see that. He's so competitive out there --- he hates to lose and if he gives up a run or a hit, he'll pound his glove, he's not happy, he feels like he's failed. It's controlled emotion."

As great as Weirich is, Ash needs to find that best, second option after the graduation of J.T. Bolken.

"They were 1A and 1B," Ash said, "because there were times last year when J.T. was just as good, if not better, than J-Dub. So that's a huge loss. We have to find that No. 2 guy. We've been able to throw quite a few guys the first five games, it's a combination of multiple people."

Also lost to graduation was Blaine Meyer, who went 6-0 last season. That means fully half of the team's wins, 14 of them, are no longer on the team.

There are plenty of arms to choose from, including seniors Brandon Williams, Grant Wood, Kade Franks and Gunnar See, and juniors Cade Galbreath, Joseph Travis and Blake Terry.

"With the new pitch count, you really need four good arms to get through districts, I believe," Ash said. "You can't just rely on one or two guys anymore, I think you really have to have the best team to go as far as you want to go."

TO SAY THE JAYS ARE STRONG UP THE MIDDLE would be an understatement. It's a core of talented, experienced players, especially when Weirich's on the mound --- senior All-State catcher Gaven Strobel, All-State shortstop Wood, either senior Hayden HJirschvogel or junior Michael Skinner at second, and speedy junior Tyler Bise in center field.

Solid as the pyramids.

"We're at an advantage with our strength up the middle," Ash said. "We save our pitchers a lot of runs just by turning double plays."

Offensively, Weirich led the team in hitting at .394 last season and is batting in the leadoff spot, while speedy junior left fielder Payton Bodenstab has gotten off to a fast start batting second.

"We're fast throughout our lineup," Ash said. "Even our guys you'd consider slow, they're pretty quick."

"Kade comes up with more clutch hits than anybody I've ever had," Ash said. "He's an RBI machine."

Last year's squad was built on pitching and defense, as the team batting average was a modest .260 entering the stretch run. Will it be more of the same? Maybe not.

"We're going to rely on our pitching and defense, again, but I think we're going to be better offensively," Ash said. "That should take a little bit of the pressure off our pitchers, knowing they don't have to go out there and win a 2-1 ball game every time. Last year, that's how we felt we had to win."

The Jays were an eye-popping 10-2 in one-run games last year, and they're 1-0 this season.

"It was ridiculous how many one-run games we won," Ash said. "We might have to do that again, especially early on, until we get some things figured out offensively. But I really believe we're capable of putting up a lot of runs (they've scored 35 in their first five games).

"You can have a very young team with a lot of talent, but if they don't have much experience, you can be exposed. So I think the experience level for us plays more of a factor than anything --- guys have been in those one-run games

"We just have to go play and execute."

And there's this: "We want to stay healthy," Ash said, "because if you get one kid hurt, one key piece hurt, it can change the whole complexion of your team."

As they pursue their dream, here's wishing the Jays good health and good luck ... although they may not need much of the latter.

The Jefferson City Jays are looking for more celebrations this season after winning a district championship, advancing to the Final Four, and finishing second in the state in 2016.